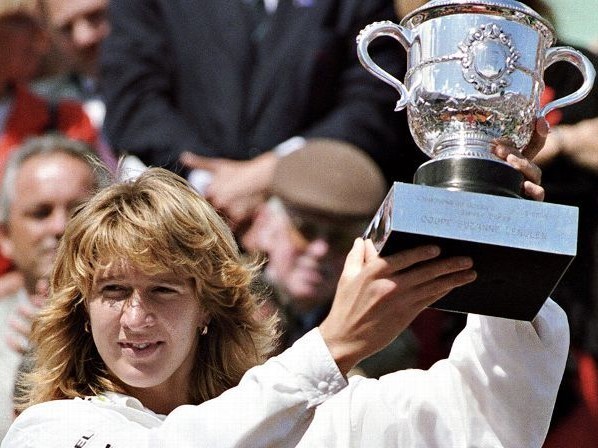 Thirty years ago, Steffi Graf turned in an unprecedented tennis season that still stands on its own today. In 1988, the West German prodigy captured all 4 major tournaments plus the Olympic gold to earn a Golden Grand Slam.

In the same year, Sweden’s Mats Wilander was battling for supremacy on the court, winning the Australian Open, the French Open and the U.S. Open, but getting knocked out in the quarterfinals at Wimbledon.

Had Wilander swung to victory in London, the tennis world would have celebrated a dual-gender Calendar Grand Slam. That tantalizing prospect was reminiscent of 1969, the closest the sport had come to serving the same man and woman with all the singles trophies.

Back then, racquet virtuoso Rod Laver basked in glory after winning all four competitions. Reigning queen Margaret Court claimed three of the prized events but succumbed at Wimbledon in the semifinals.

But 1988 ruled supreme in the annals of professional tennis and young Steffi Graf made it happen. Nineteen years old at the time, the versatile power hitter started off the season with a major title already in hand.

The wunderkind who had turned pro at a tender age of 13 defeated top-ranked Martina Navratilova at the 1987 French Open. She closed out her breakthrough year with a 75-2 winning record to assume the world’s #1 spot and held it for the next 186 consecutive weeks, still a record today though tied by Serena Williams in 2016.

Taking center stage at the 1988 Australian Open Final, the baseline master faced another tennis veteran in the form of Chris Evert. She vanquished the American in two straight sets.

Navratilova and Evert had dominated women’s tennis the entire decade and “fraulein forehand” was the first to break their duopoly.

Meanwhile, a seasoned Mats Wilander was struggling at the Final against local Australian hero Pat Cash, one of the greatest net players of all time. Wilander ultimately emerged victorious to notch his 5th career title.

Billie Jean King- All In

Following a traditional line of Swedish tennis stars, Wilander won his 4th Grand Slam singles at the age of 20, the youngest male in the pros to achieve that feat. Similar to Graf, 1988 proved to be the pinnacle of his professional career.

Both sailed through the next competition at Roland-Garros. Graf shut out Natasha Zvereva 6-0,6-0 in a 32-minute Final, the shortest ever on the books. Wilander beat Henri Leconte in three straight sets.

At Wimbledon, Graff and Navratilova squared off again and the youthful gun succeeded in overcoming her 32-year old European rival 5-7,6-2,6-1. The Czech-born player was no stranger either to the All England tennis club; she had won Wimbledon 6 years in a row leading up to 1988.

Wilander, though, stumbled earlier and lost to Miloslav Mecir, effectively killing not just his chances of wearing all 4 crowns, but at being the first male to win on three court surfaces- hard, clay, and grass.

At the U.S. Open in New York, the West German and Swedish duo once again reached the champions’ podium. Wilander took out Ivan Lendl in a hard-fought, five-set duel that lasted 4 hours and 54 minutes, the longest Final ever played at the time.

Graf defeated Gabriella Sabatini to become the second woman after Margaret Court to complete a Calendar Grand Slam. She then carried her triumph to new heights, beating the Argentine again 6-3,6-3, this time for the gold medal at the Summer Olympics in Seoul.

By all measures, 1988 was one of the most heralded years in professional tennis, blazoned by a rising female genius and complemented by an established male star.