It’s a best seller, but is BJK an accurate and fair chronicler of tennis history? 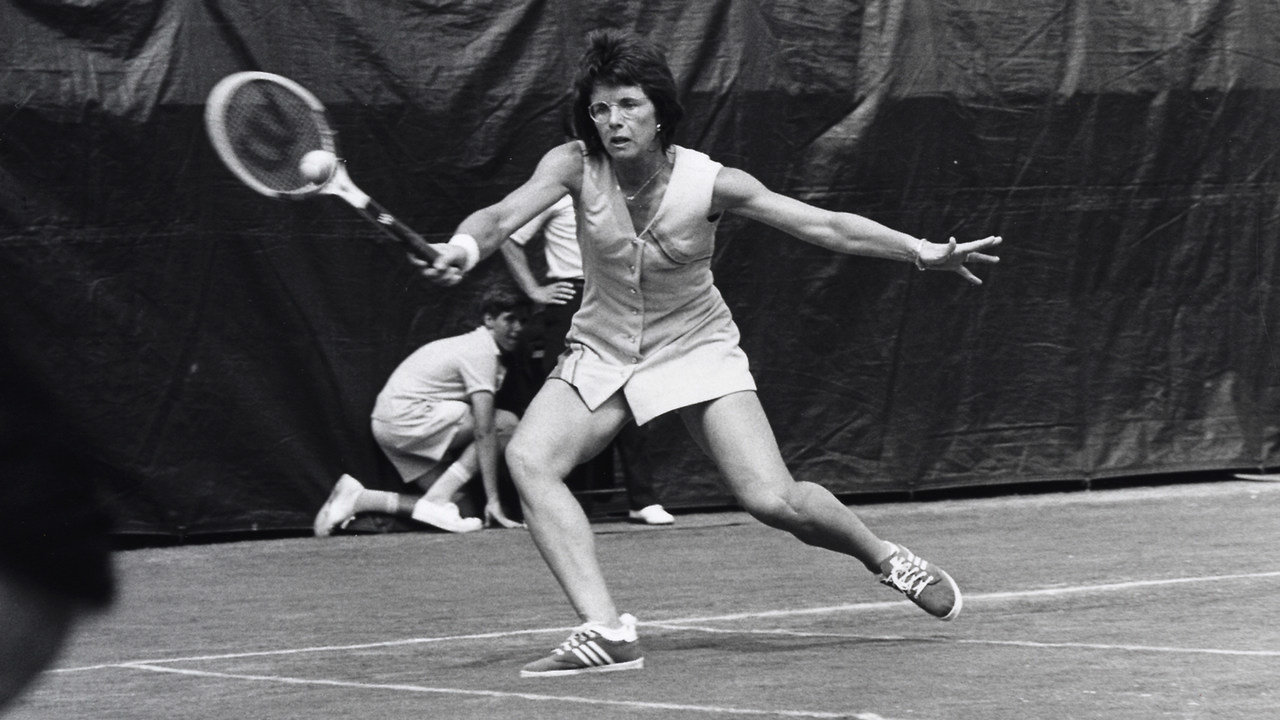 Billie Jean King in action at the West Side Tennis Club in Forest Hills (US Open), 1970. Her 3rd autobiography, 'All In', was released in August, 2021.
Ed Fernberger
Posted Sunday, September 26, 2021 12:00 am
By Richard Naughton, tennis historian

Billie Jean King has been described as “the most important single figure in the history of women’s tennis, as player, stateswoman, innovator, and entrepreneur” (World of Tennis, 2001). The occasion of her new autobiography – All In – written with Johnette Howard, a sports columnist, and Maryanne Vollers, who writes on civil rights issues, is of great interest.

‘All In’ is Billie Jean’s third autobiography – see Billie Jean (Chapin, 1975) and Billie Jean King (Deford, 1982). What makes it different is its length, its level of detail, and due to Billie Jean’s interest in civil rights issues, the willingness to sprinkle reference to these matters throughout the text.

However, while I enjoyed reading about King’s tennis life and competition, I found the book flawed on two important fronts.

First, the hostility King feels for Margaret Court is so ingrained that she is unable to write a history of the years 1960 – 1975 that is balanced and accurate. Second, the book undermines previous accounts around the establishment of the “Original Nine”, the group of women who broke away from the international tour in 1970 to form the Virginia Slims Circuit, the foundation for today’s WTA Tour.

Venus & Serena- A Legacy On and Off the Court

On Margaret Court  The attacks on Margaret Court in ‘All In’ reach a new level. Previously, King has claimed that many of Court’s titles don’t count because “nobody” played in the Australian Championships – which I don’t accept.

Here King argues that for much of their early careers Margaret Smith (Court) had an unfair advantage because the Australian system allowed for “shamateurism” – where the amateur players were effectively paid (p 135). Margaret was accepting “Bob Mitchell’s largesse” (p 182). Mitchell was a Melbourne businessman who supported a group of players in the late 1950s and early 1960s.

Some of King’s information is inaccurate and inconsistent with material in the Deford autobiography. But why does Billie Jean enter this “shamateurism” debate when she admits (p 53) that she received financial help from local tennis patrons, and later travelled to Australia at Mitchell’s expense – because he wanted to develop a player to beat Margaret Smith?

Margaret Smith’s 1965 Wimbledon victory is erased from history when the reader is told that Maria Bueno “won her second straight Wimbledon title” that year (p 115). Then in Appendix 1 Billie Jean claims to have been year-end number 1 in 1973, a year Court won three major events and was the top earning player by a proverbial mile.

These errors are difficult to explain for someone with an interest in tennis history. Especially the 1973 year-end ranking – because there is an explanation given concerning King’s nebulous claims to have been number one in “1971” and “1974”.

Court at no time played on the “rival USLTA tour”. As soon as she returned to the tour after a period of maternity leave, she joined the Virginia Slims tour. Indeed, Billie Jean beat Court in Virginia Slims events in Charlotte, NC, and Phoenix in September and October of 1972.

Bizarrely, King fails to acknowledge that Court ever played on the Virginia Slims circuit! This even extends to 1973 when Margaret Court was the main drawcard on the circuit. Even at this point King insists that the USLTA was adding events including Margaret (p 187).

This nonsense is simply shameless for someone proclaiming she values honesty and integrity (p 135).

On the “Original Nine”  The matters concerning the “Original Nine” are significant because they involve a notable moment in women’s sports history and raise the question whether King can “impose” her own version of events over a more likely, or “actual” version.

She claims to have called Alistair Martin, the USLTA president, before a final decision was made by the women to sign contracts with Gladys Heldman of World Tennis (p 174). In the call, King allegedly told Martin that he left them with no choice but to sign their own contracts, building a false narrative that had he listened to her, then they might never have broken away (p 181).

But did the call actually take place?

In the editorial of World Tennis (December, 1970), Mrs. Heldman wrote a meticulous minute-by-minute account of the events of the days leading up to the signing of the “Original Nine” contracts. There is no reference to King’s phone call to Mr. Martin in that editorial. There is no mention of that phone call in the Chapin autobiography either (p 104).

Gladys Heldman was the mother of Julie Heldman, a professional tennis player who was also a member of the “Original Nine”. Gladys had already set up the first ever Virginia Slims Tour event in Houston in September of 1970 and she had a history of running major tournaments. In her book, ‘Driven: A Daughters Odyssey’ (2018), Julie writes that she was concerned that Billie Jean and her husband, Larry King, planned to take over her mother’s role as organizers of the new women’s tour (Driven, p 271).

Julie Heldman- Playing the First French Open During a Revolution

Julie told the players that her mother was a better person to run the new women’s tour than Larry King, and the players “voted” on the issue. There is a conflict between Julie’s version and the story told in ‘All In’, where Billie Jean claims (p 175 -176) that the players unanimously hired Larry King, but he “handed the role over to Mrs. Heldman” – with some statement about the Kings not thinking that she wanted the job.

The King version is questionable because one wonders how Julie Heldman, as Gladys’s daughter, would have been part of any “unanimous” vote for Larry King. The inconsistency in these versions will trouble researchers and must be clarified.

Billie Jean failed to respond to detailed assertions put by Julie in her book about a vote between “Larry” and “Gladys” with names written on scraps of paper placed in a glass bowl and dumped on a big bed (Driven, p 272). The absence of any such response in ‘All In’ means the material provided by King is merely an “alternative version” of events that took place. It fails to meet the test of a satisfactory historical record.

Billie Jean King’s book is certain to be successful. She has a huge following, and rightly so, and people will identify with her personal struggles and the strong position she takes on social issues.

Though, as a tennis historian, I expect more in terms of historical accuracy and I am troubled by King’s overriding need for the story of tennis to be mostly about herself.