Meltdowns At The Masters 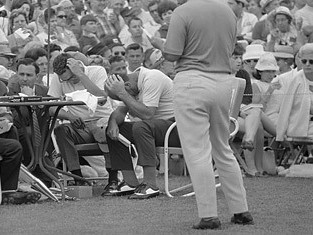 Roberto DeVincenzo with his hand over his head at the 1968 Masters after mistakenly signing par on his card instead of a birdie. Consequently, the Argentine was forced to concede the tournament to Bob Goalby.
Posted Sunday, April 9, 2017 8:00 am

When nerves take over at the Masters’ final round, even the best and most experienced on the course can be thwarted. Over the decades, at least a dozen leaders had their dreams shattered in dramatic fashion at the back nine of the tournament’s home stretch.

In 2011, five years prior to Jordan Spieth’s monumental collapse on the 12th hole, Rory McIlroy led the front 9 before triple bogeying on the 10th, double faulting on the 12th, and missing par on the 11th and 15th. Though he finished T15, McIlroy roared back two months later to win his first Major at the U.S. Open.

Greg Norman was an earshot away from the green jacket in 1996 when he entered Sunday’s round 6 strokes ahead of Nick Faldo. But the top ranked Australian double bogeyed twice- the first on the 12th to lose his lead and the second on the 16th to fade out.

In a fateful finish, Norman and Faldo traded scores at the end of the day when the Englishman walked off 5 strokes in lead. Ironically, the next English golfer to take the Masters was Danny Willet at Spieth’s own meltdown twenty years later.

Norman was no stranger to a heart-brake finish in Augusta. In 1986, “The Shark” twice bogeyed on the 10th but after burying four straight birdies found himself tied for first place with Jack Nicklaus on the 17th. Norman’s failure to sink a 15-foot par putt on the last hole sealed his fate. Nicklaus became the oldest player at 46 to win the Masters, while Norman went on to grab the Open a few months later.

The 18th hole proved elusive for Arnold Palmer in 1961. The now-deceased legend was leading South Africa’s Gary Player at the 17th hold (-9) to (-8) before landing a bunker shot on the 18th and launching a series of putting misses that cost him the tournament.

Three contenders found themselves ahead of their packs before collapsing into losing playoffs. 1979 saw Ed Sneed enjoy a 3-stroke advantage on the 15th before a succession of bogeys sent him into an unsuccessful tie race with Tom Watson and final victor, Fuzzy Zoeller, the last debut winner at the Masters.

Ten years later, Scott Hoch bogeyed the 17th and parred the 18th to force a playoff where he succumbed to Nick Faldo. In 2009, Kenny Perry led most of the day until he bogeyed the last holes and lost the follow up contention to Angel Cabrera, the first South American Masters champion.

In two bitter lessons that prove concentration is key all around, Roberto DeVincenzo was forced to concede the 1968 Masters to Bob Goalby after the Argentine birdied the 17th but mistakenly signed par on his scorecard.

Hubert Green was set for a playoff at the 1978 tournament but missed a 3 foot birdie on the 18th when a radio announcer distracted his concentration.

In an historic episode that would have created the first and only amateur champion at the Masters, Ken Venturi led the first three rounds in 1956 and was 4 swings ahead going into the back nine. But then the demons took over. He fired eight bogeys through to the end and lost the tournament by a single stroke. Had he won, Augusta would have had a 24-year old car salesman wearing the green jacket.

Other Articles Enjoyed:  Pro Golf Breaks Out, The Caddy: From Handler To Hall of Famer, The Great Golf Marathon