Vin Scully, A Memory Worth Savoring 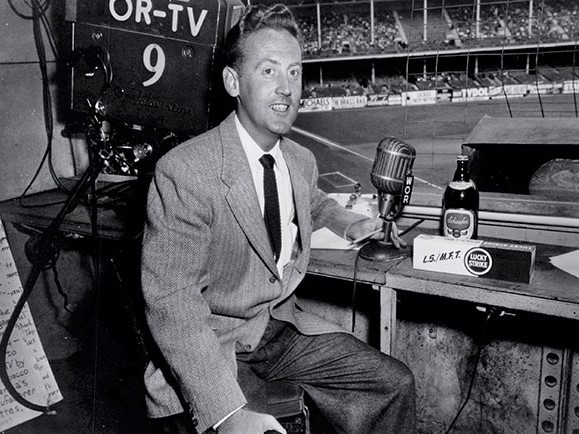 On September 25th, 2016 Vincent Edward “Vin” Scully sat behind the microphone in a Dodger Stadium broadcast booth and called a Dodgers home game for the last time.

67 glorious seasons earlier, Scully announced his first baseball match in Ebbets Field, the Dodgers’ New York home at the time. Back in 1950, he joined Red Barber and Connie Desmond as a junior broadcaster for the team. Three years later, at the age of 25, Vin became the youngest person ever to announce a World Series game.

Despite the myriad of voices that came out of basements, barrooms, and broadcast schools, Scully’s tenure behind the mic constitutes the longest run of any broadcaster associated with a single professional sports team.

Among the earliest recollections I have as a kid was being tucked into bed and my parents setting a transistor radio in the room to lull me into sleep. At a low volume, the radio was tuned to the Dodgers game on KFI 640 am.

I didn’t know much about baseball but I knew I liked it. Rocking back and forth, working up a sweat and trying to tire myself out, I listened to Vin Scully.

30 years later, in a remarkable twist of fate, I met and worked with that same night time radio voice of my childhood years. The best in baseball and one of the best in the entire business for years, Scully would be the lead announcer for a made-for-television golf match on which I was lucky enough to work.

It was Thanksgiving weekend just outside of Palm Springs, California and The SKINS Game was underway. I was an Associate Producer and one of my roles was to write and edit the opening tease for the broadcast and all of its features.

I was on the job for a little more than a year and had worked with a number of professional broadcasters. While all of them were talented, none of them were Vin Scully.

The SKINS Game featured four of golf’s biggest names that gathered every fall for a “hit and giggle” competition. It was the highest rated golf program on TV other than the Masters Tournament and I was charged with copywriting for Scully. Was I nervous? You bet. Was I intimidated? Thanks to Vin, not a chance.

After laboring over every word, I handed the finished product to Vin who accepted it graciously. SKINS Game director Steve Beim introduced us earlier in the week. Days later in the booth, as he slipped the headset off his left ear, he acted like he’d known me for years. “Thanks Keith,” he said with a smile.

He slipped the headset back over his ear, gave the copy a glance and informed the control room he was ready to “give it a try.” Every word I wrote he read and it came out a million times better than I could have ever imagined.

That was a quarter century ago. I have seen Vin on a couple of occasions since then and he still remembers our short time together. Working with the greatest in the field remains among my most treasured memories.

There are excellent announcers in the business today and many others coming up the ranks, but none will ever match the illustrious broadcaster and his 67 years of incomparable work.

Though baseball and America said goodbye to Vin Scully when the Dodgers made the final out of their 2016 season, the play-by-play radio legend will be remembered and exalted for generations.

Keith Hirshland is the author of “Cover Me Boys- I’m Going In” and other books. His works can be viewed at www.keithhirshland.com keith.hirshland@gmail.com

Other articles enjoyed: The King And I: A Personal Essay, Jim Bouton And Ball Four, The Worst Years In American Baseball, Fidel Castro & Baseball