Venus & Serena, A Legacy On and Off the Court 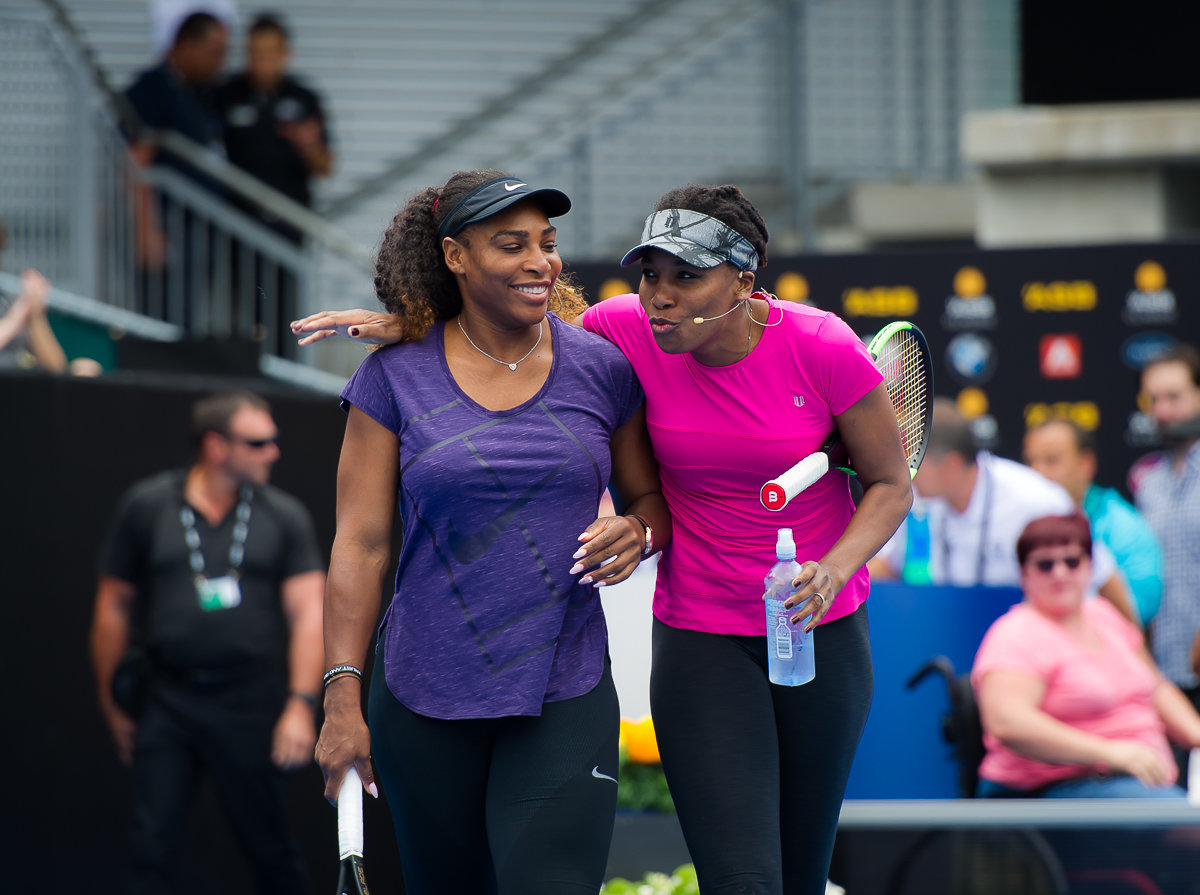 Venus (right) and Serena Williams, the most successful sibling act in sports history. Cecil Harris is author of a new book, "Different Strokes: Serena, Venus, and the Unfinished Black Tennis Revolution". The book is available for sale on our website.
Posted Sunday, August 23, 2020 8:00 am
By Cecil Harris, author

Despite the covid-19 pandemic, the 2020 United States Open tennis tournament is scheduled for August 31 to September 13 in New York. That is welcome news for Venus and Serena Williams, who have won eight singles titles (six by Serena, two by Venus) and teamed for six doubles titles at the Grand Slam event.

While becoming the most successful sibling act in sports history, the Williams sisters have also made women’s tennis faster, quicker, harder-hitting and more athletic, and inspired generations of youngsters to play the game.

Venus, the elder sister by fifteen months, and Serena learned to play on roughhewn courts in the hardscrabble Compton section of Southern California. In 2002 and 2003, they were ranked No. 1 and No. 2 in the world. If you took that for granted at the time, then that’s unfortunate because you are not likely to ever see another tennis family achieve that again.

Each sister turned pro in the 1990s at age 14. They were strong and confident figures on court with beads in their braided hair, crushing serves, forehands and two-fisted backhands while sending a message to their opponents—get stronger and fitter or step aside.

Credit their parents, Richard Williams and Oracene Price, who instilled in Venus and Serena the belief that they could achieve anything with hard work and determination. Also credit Althea Gibson, a five-time major champion who in 1957 became the first Black player ever ranked world No. 1.

All In- Billie Jean King Autobiography

“I once wrote a paper about her for school,” Serena said. “There were tournaments that wouldn’t let her play because they weren’t accepting Blacks. And when she could get into tournaments, she wasn’t always allowed to use the locker room like the other players or eat in the dining room like the others. She had to sleep in cars in some tournaments when everybody else was sleeping in hotels.”

Serena’s 1999 U.S. Open title was the first by a Black woman at a major event since Gibson won the 1958 U.S. Nationals (forerunner of the U.S. Open). Drawing upon inspiration from Venus and Gibson, Serena has become the gold standard in women’s tennis. With her incomparable serve, power game, athleticism and intensity, Serena has won a record 23 major titles in the Open era (since 1968). One more major title would tie Margaret Court’s all-time mark.

As for Venus, the record book shows that she has conquered Wimbledon five times and the U.S. Open twice. However, her most impactful victory occurred off the court, the culmination of a three-year battle that began in 2005 to achieve pay equity for women at Wimbledon, tennis’s premier tournament.

The U.S. Open was the first Grand Slam event to offer equal prize money in 1973. Eventually, the French Open and the Australian Open followed suit. However, the men who ran Wimbledon believed that since men played best-of-five-set matches at the majors while women played best-of-three, men had to work longer for the money and should be paid more.

But women’s tennis, certainly by 2005, had proven itself to be as big a draw as men’s tennis. Indeed, the emergence of Serena and Venus as global superstars made the sisters as much of a drawing card as any leading man.

In 2005, Venus advocated for gender equity at the annual meeting of the Grand Slam committee, held during the second Friday at Wimbledon. The committee consists of representatives from each Grand Slam event (Wimbledon, U.S. Open, French Open, Australian Open), the Women’s Tennis Association, the Association of Tennis Professionals (men’s tour) and the International Tennis Federation.

The day after stating her case to the committee, Venus scored a dramatic win over Lindsay Davenport in the Wimbledon final, 4-6, 7-6 (7-4), 9-7—at 2 hours, 45 minutes the longest women’s final in Wimbledon history and, arguably, the finest.

Yet the All England Club voted against bringing pay equity to Wimbledon in 2006. Instead, a modest pay increase was made to the women’s purse. Men continued to be paid more across the board, but the female champion would make “only” 30,000 pounds (approximately $39,000) less than the male champion.

With Venus as the anchorwoman, the WTA secured the backing of prominent female political figures in the United Kingdom such as Tessa Jowell, secretary of state for culture, media and sport, and Patricia Hewitt, trade and industry secretary. Venus also gained the support of the United Nations Educational, Scientific and Cultural Organization.

Venus then wrote an editorial that appeared in The Times of London on June 26, 2006, one that effectively put Wimbledon’s patriarchs on the defensive: “It is a shame that the greatest tournament in tennis, which should be a positive symbol for the sport, has been tarnished,” she wrote. “How can it be that Wimbledon finds itself on the wrong side of history?”

Once Venus’s editorial appeared, the issue of pay equity became a hot topic throughout the U.K., even in Parliament. When Janet Anderson, Member of Parliament, asked British leader Tony Blair during Prime Minister’s Questions about the need for pay equity at Wimbledon, Blair expressed his support.

With Venus tapping into her power and using her voice to amplify and persuade, women in sports had achieved a major victory. Pay equity has been the rule at Wimbledon ever since.

For more than a quarter-century, Venus and Serena Williams have had an enormous impact on tennis. In 2020, Venus turned 40 and Serena 39. Their brilliant careers are in the twilight, yet they are cultural icons and role models for girls and young women, and boys and young men, around the world.

Cecil Harris is the author of "Different Strokes: Serena, Venus, and the Unfinished Black Tennis Revolution" (University of Nebraska Press). The book is available for sale on our website.