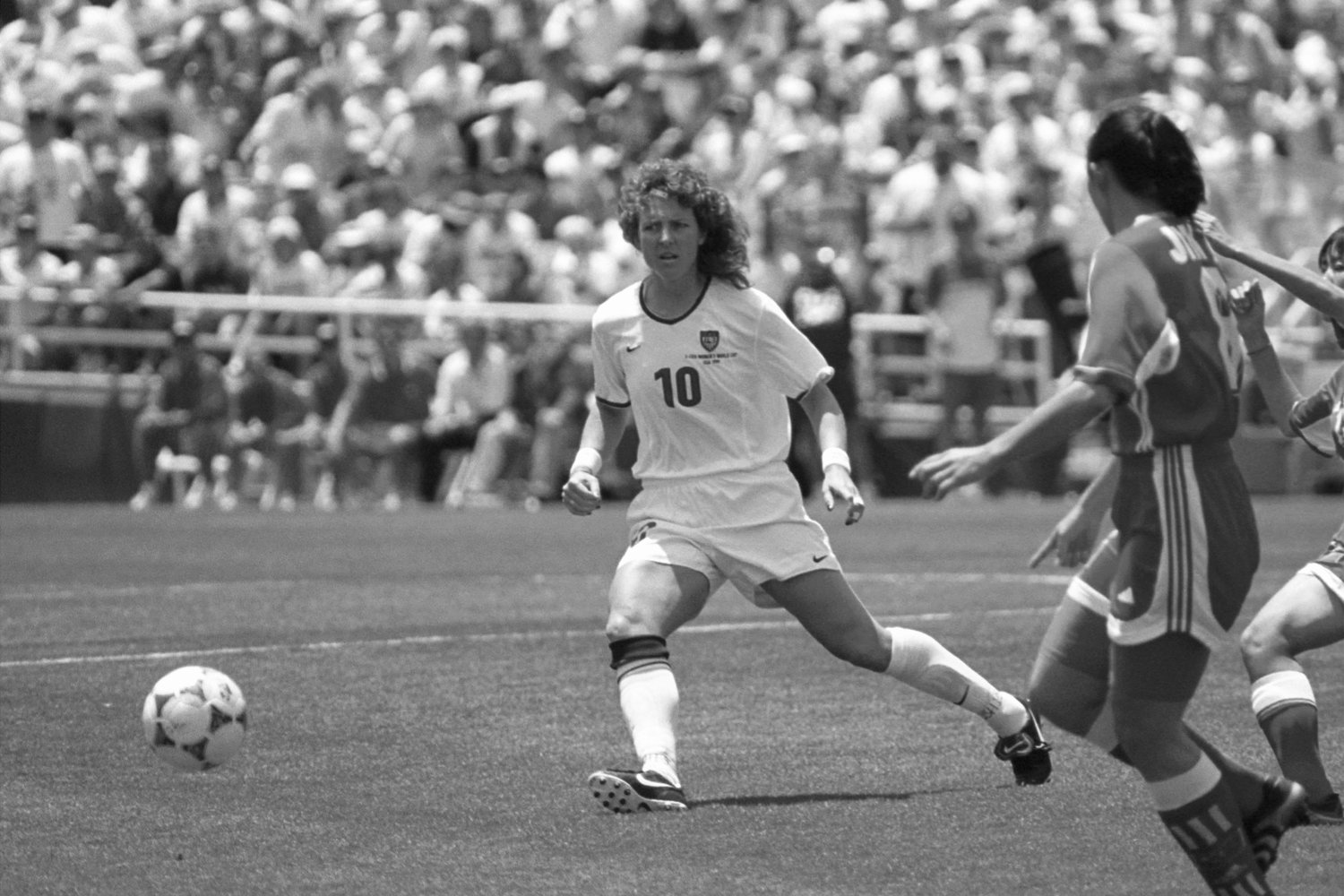 Michelle Akers in action at one of the United States Women's National Team games. As the first female global soccer star, Akers lent her unmatched heading skills and finishing touches to 2 FIFA Women's World Cup Championships (1991, 1999) and the Olympics (1996).
Posted Sunday, November 22, 2020 8:00 am

One of the greatest female soccer players of all time, Michelle Akers defined what it meant to be a sports trail blazer. In 1986, at the University of Central Florida, she was the first in the women’s category to receive the Hermann Trophy, or college soccer’s equivalent of the Heisman Trophy. Five years later, she took home the Golden Shoe award at the inaugural FIFA Women’s World Cup when she helped lead Team USA to its first victory. Pile on an Olympics gold medal (1996) and a second World Cup championship (1999), and it’s not surprising that FIFA named her ‘Female Player of the Century’ (shared with China’s Sun Wen). Today, 20 years after retiring from the game, the former soccer star lives a quiet life outside Atlanta, Georgia, tending to her horse rescue farm and animal welfare program. Sports History Magazine asked Michelle to recall her playing days and share her thoughts on women’s soccer.

You grew up in Seattle, Washington. At what age did you discover your talents on the soccer field?

I always knew I was good, but I didn’t realize HOW good until half-way through college. And even then, not until the 1991 World Cup did I realize my potential was on the level of being one of the best players in the world. I mostly just focused on being MY best and having fun on the field and with the process of improving as a player. I never really compared myself to other players, or thought about it much.

Soccer, especially women's soccer, was still at its infancy in America when you started out. Who did you look up to as sports heroes?

My favorite soccer player was a Scottish guy, #17 Dave Gillett on the Seattle Sounders (North American Soccer League). I loved his air game, toughness, and work ethic. I practiced hours trying to tackle, head the ball, and play like he did. And before that, I loved #75 Mean Joe Greene on the Pittsburgh Steelers (NFL). I had his jersey and dreamed of playing in the Super Bowl with the Steelers.

In 1986, you were the first college female ever to receive the Hermann Trophy, an award that recognizes the country's top male and female college soccer players. Did you feel at the time that you were pioneering the women's game?

Not at all. In fact, it’s a funny story because that trophy arrived out of the blue at the UCF soccer office, broken in half with a letter saying congratulations, and that was that. There was no fanfare or even a phone call from the Hermann people. So, to me, it didn’t leave much of an impression. Years later, the award received more acclaim and publicity and grew in prestige. Only then did I begin to think about how far that award and the college game had come since my own college career.

At the 1991 Women's World Cup, your team employed the "Triple-Edged Sword" lineup with Carin Jennings and April Heinrichs in the wings and you in center. What made that formation so successful?

We were all very different kinds of players. Carin was an unorthodox and very successful 1v1 player with an uncanny ability to score, as well as pass and combine in small spaces. April was fast and direct in taking on players 1v1 and a solid finisher. And I was very good in the air, a good target player, and finisher. So, between the three of us, it was an impossible mix to mark up or defend against.

The 1990s turned out to be a phenomenal decade for women's soccer as you and Team USA clinched the 1991 and 1999 World Cups and won gold at the 1996 Olympics. Do you think the country as a whole grew to embrace the game because of the women's performance?

In part. Yes, the ‘96 Olympics were the first Olympics to include women’s soccer and the fact that it was in the U.S. and we won Gold definitely brought a lot of attention to the team. And the ‘99 WC was also a huge boost for those same reasons. But the U.S. men’s game also contributed to the growth. The ‘94 WC was hosted by the U.S. and that brought unprecedented attention and awareness as well. So, those years and the success of the events, as well as the United States Women’s National Team’s victory, were huge to growing the game at home.

While American women have gone beyond expectations on the international stage, why do you think the men continue to remain hopelessly behind?

Culture in part. Around the world, soccer is a male-only or male-dominated sport. And in the U.S., the men’s game wasn’t given the same platform as other more prominent sports such as basketball, baseball, and American football. We are also a much bigger country and this presents a different challenge in developing players as compared to other smaller-sized countries. So, we lag behind historically and also have not yet figured out how to successfully develop our players within those conditions. Apply that to the women’s side… culturally, women in the U.S. had more freedom to play soccer and sports in general compared to other women around the world, so we had more opportunity and support for development.

Professionally, you put in a few seasons with Tyreso FF, a Swedish club. Tell us about the experience of an American female playing a European game in Europe.

Tyreso FF was a D2 club wanting to be D1 and my challenge as a player developmentally was to become a game-changer/game-winner player, so it was a perfect fit. The coaches were the Swedish women’s national team and youth team coaches and the experience was incredible for me. I loved Sweden. Loved the people. And I am forever grateful for the opportunity.

Are there any coaches you played under who really made a difference in terms of your own individual development, or a team's performance?

Anson Dorrance. Tony DiCicco. Anson laid out the vision for our USWNT to be the best in the world before there was much support or competition for the women’s game internationally, or within US Soccer. He was also brilliant in choosing players who meshed together well and he provided individual and team insight, training philosophies, and team tactics/style of play to inspire and enable our success. Tony DiCicco did much of the same with more support, resources, and history behind us. But he had to do it within his own style and strengths as a coach while also going through similar, but also very different circumstances such as strikes, increased media attention, tougher schedule, and players with children.

What are some of your most cherished moments on the field?

Running fitness with my team, sitting on the field post game, stretching and cooling down. Moments in the locker room pregame and post-game. Walking out onto the field with the crowd cheering. Winning. Losing. They were all great.

In terms of talent and style of play, how do you see the game today compared to 30 years ago when you were out there?

It’s the same and different. It’s still soccer. The game is the game. But overall, the athletes, skill level and training equipment are at a higher level across the board which has elevated and highlighted the different styles of play and competitiveness between teams. It’s a better game to watch. Execution and artistry is higher. More teams and more players perform and compete at a higher level. And every year it continues to develop, grow, and expand.

Equal pay on the field has been an issue in recent years, especially after the women's national team proved themselves again at the 2019 World Cup. What will it take to narrow the pay gap, especially at the FIFA level?

Two things. One, a cultural shift. Women and men must receive equal opportunity, resources, and respect off the field for it to happen on the field. Although, I also think the ‘on the field' helps change mindsets 'off the field'. And two, time. Changing mindsets and culture takes time and a lot of individual courage to force change by stepping out of the box. It will take women supporting women, men supporting women, dads supporting daughters, brothers supporting daughters, etc. We still do not have it here in the U.S. So, for me, it is exciting to see other countries supporting their women and girls in ways that inspire more change here and put pressure on those who do not support equality.

What are you enjoying most at this stage in your life?

Being a mom and spending time with my horses and animals. And I am still working to step into my dream of living with and saving the wild mustangs on a thousand-acre property somewhere in the west.