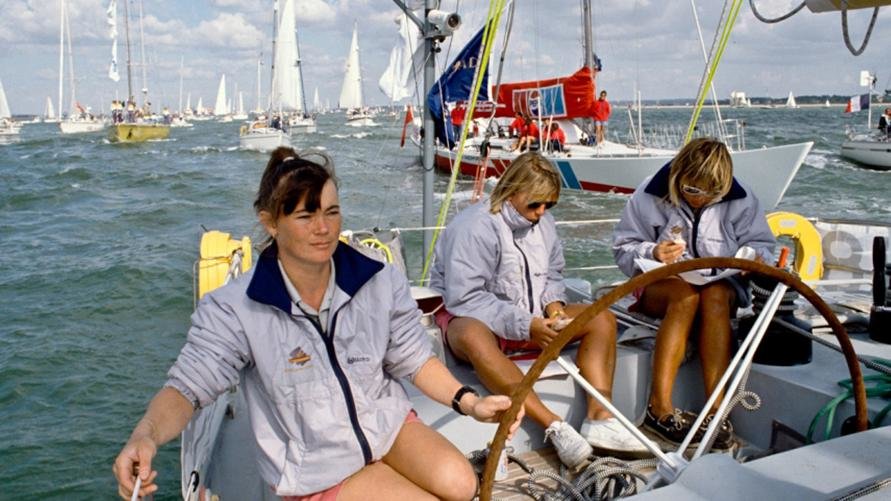 Tracy Edwards at the helm of the 'Maiden' with two of her crew members behind. In 1989, she made history by becoming the first woman to skipper an all-female team at the Whitbread Round the World Race, earning her the Yachtsman of the Year Trophy.
Posted Sunday, July 26, 2020 8:00 am

In 1989, when Tracy Edwards made it known that she was entering the 32,000-mile Whitbread Round the World Race with an all-female yacht crew, she was ridiculed and dismissed as a dreamer. Few even gave her a chance of finishing the first leg of the six-leg race around the globe. But the determined 26-year old and her team of 12 women defied all expectations. Not only did they complete the ocean-going tournament, but twice in the dangerous southern seas they placed first in their division class. Following that remarkable feat, Tracy became the first woman to receive the Yachtsman of the Year Trophy and her boat, ‘Maiden’, was inscribed in the pages of seafaring history. Changing the perception of women in ocean racing, Tracy went on to write a book, ‘Maiden’, and a documentary of the same name was also made about the crew’s adventure; both are available for sale on our website. Sports History Magazine asked Tracy to look back and share her inspiring story with us.

You grew up in a small town in England and then moved to Wales after your father passed away. Tell us a little about your early teenage years.  After my father died when I was ten my life fell apart. My Mother married an abusive alcoholic and we did not get on. We fought constantly and I was bullied at school so in the end I just ran away to Greece. I was angry and aggressive and, I would imagine, deeply unpleasant!

At 16, you found yourself working as a stewardess on a yacht in Greece. Was that your first introduction to life on the water?  My father was a sailor and he had taken my brother and I to the Isle of Wight on his friend’s boat when we were very young. We both hated it and I vowed never to go anywhere near the sea ever again! I must have forgotten that when I got onto my first yacht in Greece.

A chance encounter brought you in touch with King Hussein of Jordan, who later helped sponsor your race. Tell us about that fortuitous meeting.  I was in Newport, Rhode Island in 1985 looking for work when I was given a day’s work as a Stewardess on a charter yacht called Excaliber. We had to sail to Martha’s Vineyard to pick up the mysterious guests and it turned out to be King Hussein and Queen Noor. WE got on really well (King Hussein was a Collector of People!) and we stayed in touch over the years.

How did the idea of launching the first all-female yacht racing crew come about?  I ended up in the 1985/86 Whitbread Round the World Race on the only boat that would take me - Atlantic Privateer - as a cook and one of only 3 girls in a fleet of 260 men! I decided then that this had to change and I had to change it by proving that women could do the race.

What did folks say when they heard you were trying to raise money to enter the Whitbread Round the World Yacht Race with an all-female team?  There was much laughter and derision! But, that really just made us more determined. What really surprised me was the aggressive feel to the reaction. I see it now on Social Media when people attack each other.

Where did you find your crew and why did they believe in you, given that you never skippered through rough seas?  It was difficult as there were very few ocean racing female sailors. This is how we ended up with 9 nationalities in the 12 crew members. They found me when they heard about Maiden! I think we all just believed in each other and we did train for a year before we left.

You entered the 'Maiden' in the 1989 Whitbread race, which was 32,000 miles long and comprised of several legs with long stretches of nothing but ocean. How did the crew of 12 women get along?  This question has always mystified me as men were rarely asked it but we always were. I have always got on well with other women (and me for that matter) and I know that people may not believe this but after I had made the decision to let my 1st Mate go, we never had an argument on the boat after that. We formed an incredibly close bond and always had each other’s back.

What was the most challenging part of the race and were there any moments when you feared for your life?  The most challenging parts of the whole race are the Southern Ocean legs. It is almost impossible to describe how tough it is. Constant freezing temperatures, huge seas that throw you around like dolls, sleep deprivation, hunger and constant stress. We didn’t really feel fear during the worst few days when we nearly sank going round Cape Horn as you are so focused on survival but the fear kicks in afterwards when you think what could have happened.

You skippered a couple of other ocean vessel competitions. One of them ended up with the sponsor abandoning their financial commitment, which sent you into personal bankruptcy. What happened there?  I managed a race in Qatar and they didn’t pay us. This is not unusual.

In 2014, someone discovered that the original 'Maiden' was left to rot in a marina somewhere in the Indian ocean. You then raised money to salvage it. Where is it now and how is it being used? Well, now we are sailing Maiden around the world again raising funds for my charity, The Maiden Factor Foundation. When we can resume the tour after Covid we will be sailing a further 150,000 miles over three years, visiting over 60 destinations in over 30 countries. We work with and support Communities who enable girls into education and empower and support them to remain through their teenage years.

What are the members of the original crew doing today?  They are scattered around the world in places like the UK, New Zealand, and the United States. Most have stayed close to sailing, whether pursuing it professionally as racers, business managers, or as a form of recreation.

What's next for you on life's calendar?  The Maiden Factor Foundation is my life. We cannot have equality for women if where we are born dictates whether we go to school or not. It has to begin at grass roots level. I fear that events have overtaken the rights of women and girls and I cannot stop until we have equality for women and girls which gives us justice for everyone, everywhere.