The Ladies of the Triple Crown 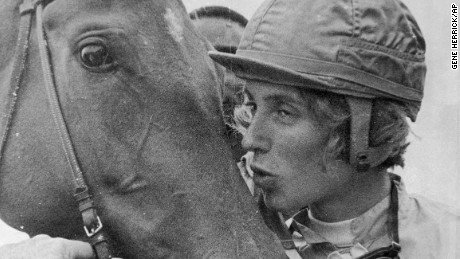 In 1970, Diane Crump became the first woman to ride the Kentucky Derby. Just a year earlier, opposition to female jockeys was so fierce that she required a police escort at Florida's Hialeah Park when she made the historic debut as the first woman professional rider.
Posted Sunday, April 26, 2020 8:00 am

The Lady is a Champ! Speed, power and grace are not the exclusive domains of male thoroughbreds at the Triple Crown.

All-in-all, females have run with the best of the males and are no strangers to the winner’s circle, and that includes the lady jockeys and the breeders and owners.

In a heartbreaking scene that is still remembered today, Eight Belles collapsed with broken legs shortly after clearing the finish line and was euthanized immediately on the spot.

Since 1903, 5 ladies have also clinched the Preakness and 3 had managed to outrun the gents at Belmont. At Europe’s most prestigious racing event, the Prix de l’Arc de Triomphe, fillies and mares took first place in five straight years between 1979 and 1983.

Unlike humans, the gap in physical strength between male and female horses is narrow, though only 40 fillies have ever been entered into the Kentucky Derby. At age 2, males and females are similar in physical development but at age 3, colts spurt ahead while fillies only catch up later.

However, only 3-year olds are allowed to compete at the top three marquee runs, a tradition that originated back in England. That stage in a horse’s life was regarded as the optimal racing age for the thrills of grand stand viewing and wagering.

But a more probable reason for seeing more guys than gals in the field is money.

Females have their own unofficial “Filly Triple Crown” consisting of the Kentucky Oaks, Black-Eyed Susan Stakes and the Acorn Stakes. With purses already running well into the six figures, owners prefer to enter their promising fillies at the lady competitions instead of going up against tough colts in the more competitive stakes.

Money figures again in their post-racing careers. Mares only foal once a year, while stallions can breed regularly. Smarty Jones claimed the Kentucky Derby and Preakness in 2004 and upon retirement, commanded stud fees of $100,000. American Pharoah, winner of the 2015 Triple Crown and Breeders’ Cup, doubled that amount to a princely sum of $200,000.

In 1982, owners and breeders hoped to strike genealogical gold by mating Genuine Risk with 1973 Triple Crown legend, Secretariat. The chestnut-colored mare not only claimed Churchill Downs in 1980, but she placed second at the other two crowns.

Their union would have produced the first offspring in history of two Kentucky Derby winners. Unfortunately, Genuine Risk gave birth to a stillborn and subsequent breeding efforts with Secretariat failed. Over the next 17 years, she only delivered two living colts, neither of which became a racer.

On the saddle, female jockeys have succeeded in carving out their own stakes as well. In 1970, Diane Crump became the first woman jockey to compete at the Kentucky Derby, piloting Fathom and placing 15th in a field of 17 competitors.

Just a year earlier, opposition to female jockeys was so fierce that she required a police escort at Florida's Hialeah Park when she made the historic debut as the first woman professional rider.

A generation after Crump, Julie Krone broke ground as the first non-male jockey to win a Triple Crown run, capturing Belmont in 1993 aboard Colonial Affair. Twenty years on, Rosie Napravnik became the first ever female to participate in all three heats.

But in the male-dominated business world of thoroughbreds, it was a woman who managed the most accomplished horse in American history. Penny Chenery, who died in 2017 at the age of 95, was the leading figure behind Secretariat, the legendary horse who captured the imagination of racing fans when he broke the longest dry spell at the time, 25 years, to become Triple Crown champion.

His record finish at each of those three races still stands today. After finding fame and glory with Secretariat, Chenery, a Columbia Business School graduate, went on to preside over the Thoroughbred Owners & Breeders Association and join the Executive Committee of the American Horse Council, the trade group in Washington, DC.

Chenery held the highest executive position among women in horse racing but she wasn’t the only influential female in the testosterone-filled world of owners, trainers and jockeys.

High society ladies such as Allaire du Pont of the family of chemical manufacturers that bears her name, and Martha Gerry whose family was connected to Standard Oil and the Vanderbilt railroad empire, were active owners and breeders.

In 1983, Penny, Allaire and Martha were the first women admitted to the Jockey Club, the prestigious 19th century body entrusted with the registry of all thoroughbreds in the U.S., Canada and Puerto Rico.

Female owners of race horses were already common by the 1940’s but in terms of conquering the jewels in the crown, only 4 of the 12 Triple Crown champions were associated with women.

Fanny Hertz, wife of taxi and rental-car mogul John Hertz, was the first of that cadre when she won the three contests in 1943 with Count Fleet. Her colt swept Belmont in 25 lengths, a record margin that held until Secretariat blazed through the finish line in 31 lengths.

After Chenery’s victory with Secretariat in 1973, Karen Taylor and Sally Hill stepped into the winner’s circle with Seattle Slew. In partnership and jointly with their husbands, the two paid $17,500 for a yearling that became the only undefeated horse in 1977 to claim the Kentucky, Maryland and New York events.

A year later in 1978, Patrice Wolfson lifted her three trophies with Affirmed, a chestnut horse bred at a Florida farm owned by her Wall Street financier husband, Louis Wolfson. Affirmed was the last Triple Crowner before American Pharoah (2015) and Justify (2018) took center stage.

Whether the legacies they left were under, above, or off the saddle, the ladies of thoroughbred racing have made substantial contributions to the sport. The National Museum of Racing & Hall of Fame already has a handful of female inductees, but no doubt more will join in the future.