A City, a College, and a Soccer Dynasty 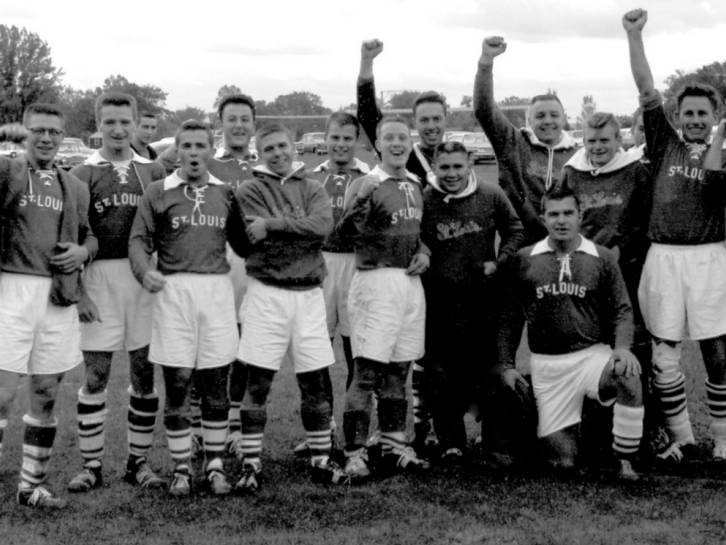 St. Louis University (SLU) ruled college soccer from the late 1950s through the early1970s, winning ten Division I titles, the most of any other school in that category. Fueled by home grown talent that came out of an immigrant population, the Billikens produced

a championship run that ended as the game started migrating from a localized sport to the national arena.

SLU began their soccer drive in 1959, the same year the NCAA sanctioned the sport as an interscholastic athletic activity. Eight colleges made the playoffs and the Bilks stormed through the tournament with at least a 3-point spread in every match.

In a day wrought with wind and rain, they took home the NCAA’s first soccer title after beating the University of Bridgeport 5-2 at Connecticut’s Memorial Stadium.

The following year they defeated the Maryland Terrapins 3-2 and the year after that, they were runner-up against the West-Chester Golden Rams. SLU triumphed again in 1962 and in 1963 when the number of college teams doubled.

Clearly, there was something special about the boys from St. Louis.

The Billikens’ first coach was Bob Guelker, an SLU alumnus who launched the school’s soccer program on a $200 shoestring budget. Over a period of 8 years, Guelker amassed an enviable record of 95-10-5, including a perfect 14-0 season in 1965. Under his stewardship, St. Louis clinched 5 championships.

In general, mid-20th century American soccer languished in the shadows, hardly drawing more than a yawn from most sports fans. But following the 1966 World Cup in England, Americans who watched the tournament on television started taking notice. Two years later, the game came to light with the formation of the North American Soccer League (NASL).

However, in St. Louis, soccer was always a popular athletic recreation, driven by the passion of immigrants and organized by local church leaders. As it turned out, both were influential for the development of the sport at SLU.

Situated on the banks of the Mississippi river, St. Louis hosted the first Olympics in the U.S. as part of the World’s Fair in 1904. In the soccer event, Canadians took gold but two clubs from St. Louis walked off with silver and bronze: Christian Brothers College and St Rose Parish, respectively.

At the opening rounds of the 1950 World Cup that was held in Brazil, the U.S. squad defeated powerhouse England 1-0 in one of the greatest upsets in Cup history. The news sent shock waves in North America and around the world. Five players on the American roster hailed from St. Louis and of those, four came from the same Hill neighborhood.

One of the players on the American team was Harry Keogh, the man who would go on to assume Gueker’s coaching job after the former left for Southern Illinois University. Keogh continued SLU’s rich tradition on the soccer pitch, adding another 5 trophies to the display case before his tenure ended in 1982.

St. Louis was no stranger to sports like baseball, basketball or football. But for areas that housed first and second-generation Americans, soccer was king. Largely Catholic and raised by working class immigrant families, the young men who took to the field with the round ball played a rough, aggressive and competitive game.

The archdiocese of St Louis, populated with Irish and Italian priests, created the most organized soccer league in the country. Monsignor Louis F. Meyer, known as the "Soccer Priest", remarked that in the seminary “we were ordained with the bible in one hand and with a pair of soccer shoes in the other”.

It was neighborhood versus neighborhood, parish versus parish, and north side versus south side. At stake were bragging rights for the best team in the city. Local employers also formed their own squads. Kutis Funeral Home sponsored a club of weekend cleat warriors that won 6 national amateur titles, helping to put St. Louis soccer on the map.

The hotbed of home-grown talent was a natural feeder for SLU, a commuter school that took advantage of the area’s soccer stars without offering scholarships. Student players supplied their own shoes and were treated to 50 cents a day for meals. Under Bob Guelker and Harry Keough, the Billikens grew into a dynasty that set the bar for collegiate soccer.

But inevitably, the sport emerged from the shadows. More schools were entering the program, recruiting talent from around the country and especially from St. Louis. The field had become more competitive.

The Billikens lost the quarter-finals in 1966 and posted a 5-3-1 record in 1967, though they still made the Final. Playing Michigan State for first place, SLU faced a team that fielded eight of their own native St. Louisans. Inclement weather forced the game to be canceled with a 0-0 draw.

SLU was still producing results even though its traditional farm system from the local community was now generating players for the diaspora. The Billikens defeated the University of San Francisco in 1969 and overtook UCLA’s heavy foreign contingency in ’70, ’72, and ’73.

Professionally, the sport was getting more media attention. In September of 1973, Sports Illustrated featured the first soccer player on its cover with the heading “Soccer Goes American”.

Two years later, the New York Cosmos signed up Pele, the world’s greatest player. Rather than join a European club, the Brazilian striker opted to play in North America and expand the frontiers of soccer in the U.S. Pele was followed by Italy’s Giorgio Chinaglia, West Germany’s Franz Beckenbauer, and Brazil’s Carlos Alberto.

But for the SLU men’s soccer team, 1973 was the end of the championship road. It was also the year when Jerry Yeagley founded the Indiana Hoosiers varsity soccer program, which is currently ranked second behind SLU with the most national victories (8).

St. Louis was one of Yeagley’s fertile recruiting grounds and it’s not a surprise that he went on to claim 6 titles to become the winningest coach in Division I men’s soccer.

The Billikens haven’t hoisted the trophy in 2 generations, but their legacy and contribution to the sport, along with that of the city of St. Louis and its parishes, remains