How The NCAA Overtook Its Rival, The NIT

A prestigious calendar event devolves into a ‘consolation’ tournament 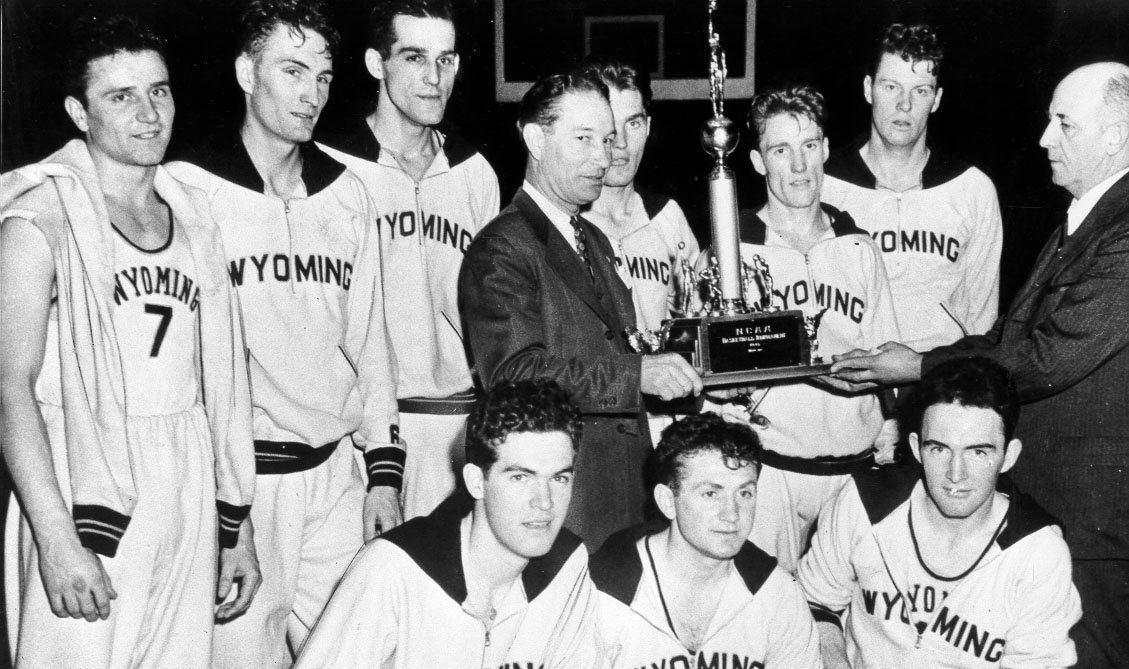 The Wyoming Cowboys being presented with the 1943 NCAA Championship trophy. Two days later, they would defeat St. John's in the first NCAA-NIT faceoff for the "mythical national championship".
Posted Sunday, March 24, 2019 8:00 am

Hosting its games at New York City’s prestigious Madison Square Garden (MSG), the National Invitation Tournament (NIT) was historically a more glamorous basketball event than the NCAA’s post-season tourney known today as 'March Madness'. Though, by the 1970’s, that hierarchy would flip and the NIT would drop to second class status.

Founded in 1938 by the Metropolitan Basketball Writers Association, the NIT held its championships at “The Garden”, the Mecca of college basketball in the 1930’s and 1940’s and the country’s premier venue for showcasing and recruiting basketball talent.

The 18,000+ seats at MSG filled up with nightly double and triple-headers that generated windfall gate receipts for the arena and for the teams. The NIT’s success inspired the National Association of Basketball Coaches (NABC) to launch their own post-season contest in the American heartland.

Though many of the seats were given away and the tournament lost $2,500, the NABC felt confident that their collegiate championship had great potential to become a preeminent sporting attraction.

The second year saw the Indiana Hoosiers prevail over the Kansas Jayhawks 60-42. No longer in the red, the series now showed a profit of $9,500 and the NABC handed over the administration of the games to the NCAA. The battle lines between the NCAA and the NIT were drawn.

But next to the NIT, the NCAA still fell short on attendance and earnings. In New York, schools were compensated for their expenses and given a large percentage of the tournament profits. Meanwhile, the NCAA could barely meet the costs of its invitees.

The winner of the NIT was also generally regarded as the “true” national champion. Local schools like St. John’s, NYU, LIU and City College of NY (CCNY) had produced many of the top players, coaches and teams in the early decades of college basketball.

But that test came in 1943 when the NCAA moved its East Regional and the Final to MSG. A year earlier, an official close to the Red Cross had also suggested that the NIT and NCAA go head-to-head for a national championship. The Red Cross at the time was deeply involved in charity games to raise funds for the war effort.

On April 1, 1943, 18,000 fans packed MSG to watch the NCAA winner, Wyoming, defeat its NIT counterpart, St. John’s. The NCAA would win two more of these faceoffs and reign supreme in three of the Red Cross “mythical national championships”.

Money and prestige kept the NCAA in New York until revelations emerged of game-fixing activities and mob influence. In 1951, authorities uncovered a point-shaving scandal that went back years and which involved mostly, but not exclusively, New York area schools.

The NIT’s reputation was badly damaged and the NCAA decided to abandon ‘Gotham’, forever stripping New York of hosting an NCAA Final. The following year, the collegiate association also doubled its field from 8 to 16 teams and implemented a new policy that widened the invitations to include not just automatic champions, but at-large bids and “also-rans” (conference losers).

Representing an increasing number of university athletic departments, the NCAA grew in influence and was able to dictate stricter terms to its participants and independents. It also ran negative campaigns disparaging the big-city, off-campus, privately-run model of the NIT.

By the early 1960’s, the NCAA had outmaneuvered its rival for first dibs in invitations. The NIT was left powerless and even if teams refused to abide by the arrangements and opted for the NIT, they risked being sanctioned or reprimanded by the NCAA.

Relegated to the NIT after being denied a post-season berth at the national collegiate championship, North Carolina State University’s David Thompson referred to the NIT in 1975 as “a loser’s tournament”. The label stuck and over time, it became euphemistically branded as the ‘consolation’ tournament.

Even court battles couldn’t hold back the NCAA juggernaut, which was increasingly fueled by the popularity of ‘March Madness’ and lucrative prime-time television contracts that the NIT lacked. By 2005, the decades-old battle between the two tournament associations was over when the NCAA settled all litigation and took over the NIT.