Pebble Beach At 100, A Real Estate Play As Much As A Golf Playground

The majestic public golf course that hugs the California coastline and costs $525 a round is celebrating its 100th year this summer.

Pebble Beach At 100, A Real Estate Play As Much As A Golf Playground 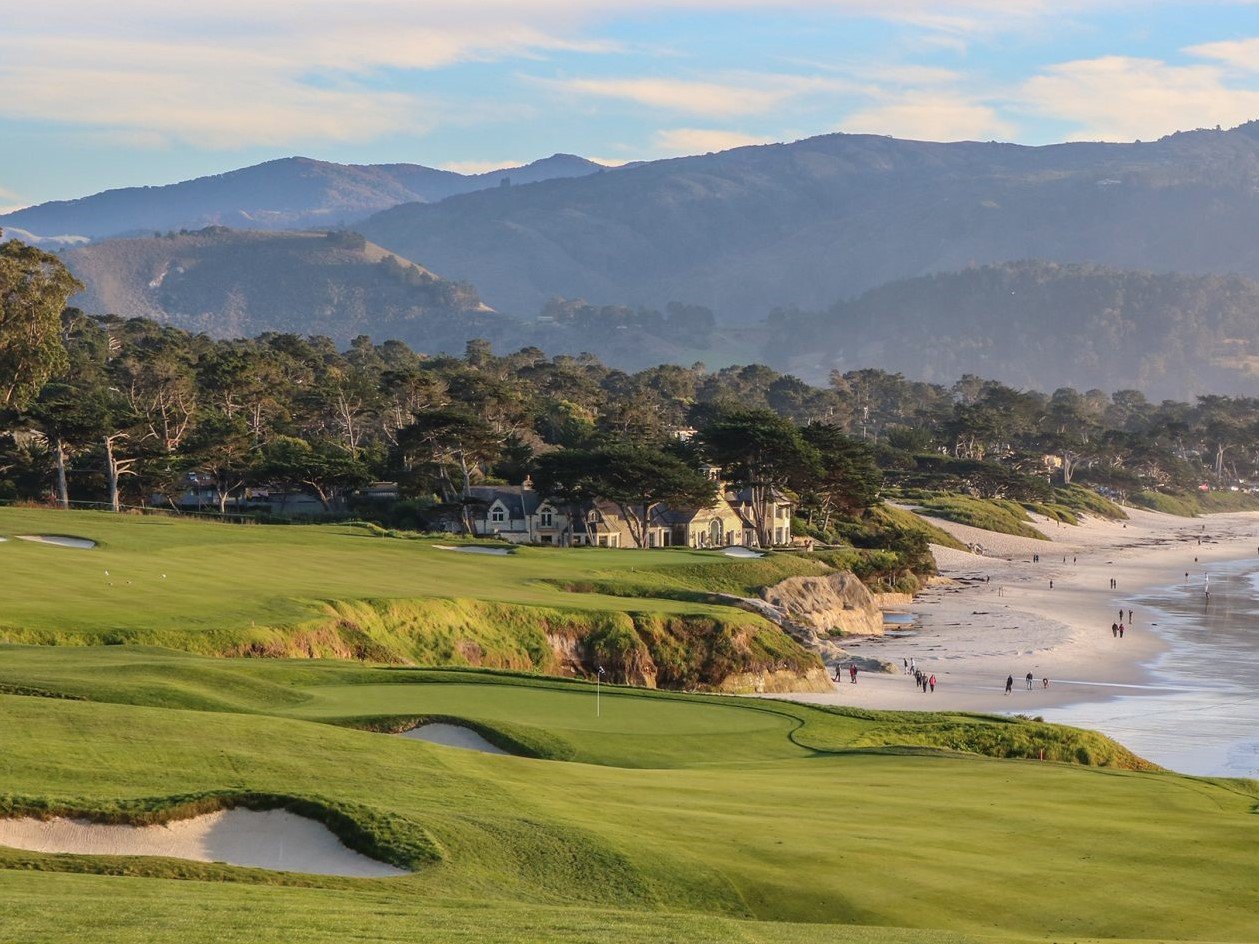 A view of the 9th hole at Pebble Beach. Celebrating its 100th anniversary this summer, the famed golf links has witnessed as much corporate drama in its history as it has golf.
Posted Sunday, June 23, 2019 8:00 am

The majestic public golf course that hugs the California coastline and costs $525 a round is celebrating its 100th year this summer. With stunning ocean and mountain vistas coming off the pinched fairways, Pebble Beach Golf Links could easily fold into a national park. But the history of this trophy property hasn’t always been as tranquil as the views. Until it was rescued by golf preservationists in 1999, Pebble Beach went through a series of eclectic owners with more real estate profit in mind than golf.

It’s not hard to imagine how real estate investors would be fired up walking the spellbinding cliffs of Pebble Beach and eyeing its surroundings. For decades, cadres of Hollywood glitterati, politicians, business executives and sports celebrities rubbed shoulders and swung golf clubs along this rugged coastline.

“I fell in love with Pebble Beach the moment I set foot there to prepare for the 1961 U.S. Amateur”, recalls Jack Nicklaus. Besides his Amateur title, the all-time golf champion won three Pro-Ams and the first U.S. Open held on the course in 1972. Twenty-five years later, Nicklaus would redesign his favorite hole at the site, the par 3, #5.

It was a group of railroad barons who first purchased the Monterrey stretch of land in 1880 for $35,000. With the hope of attracting San Francisco’s elite by train to an oceanside resort, they built a golf course next to one of their hotels, though it featured more dirt than grass.

Under resort manager and land salesman Sam Morse, the golf course was reworked to a figure-eight configuration that followed natural contours and with the maximum number of holes along the water. Morse went on to buy the property in 1919 for $1.3 million and the Pebble Beach Golf Links officially opened.

The autocratic Morse knew that golf was a big attraction, but it was still a real-estate play for him. In the company’s 1920 annual report, Morse wrote “The links were constructed primarily to exploit the real estate”. By the late 1920’s, resort profits of $1 million were dwarfed by land sales of $4 million. After Pebble Beach succeeded in drawing the National Amateur Championship in 1929, the secret was out and it became a premier golf destination.

The Great Depression crushed the resort and the land sales, but a sand mine operation further up the coast at Spanish Bay, part of Morse’s holdings, kept the owner out of the red. After Morse died in 1969, the properties passed on to the mining operator, Chicago-based Wedron Silica Company, which was more interested in extracting sand than developing and maintaining golf courses.

Next came Hollywood. Flush with cash from their blockbuster film “Star Wars”, Twentieth Century-Fox purchased the Pebble Beach Corporation in 1979 for $72 million. The new owner had no particular vision for the golf grounds and was just looking for an investment to park its cash. Less than two years on, billionaire oilman Marvin Davis took over the studio, stripped it of its assets and kept Pebble Beach which was now valued at $150 million.

Davis added The Inn at Spanish Bay and its accompanying golf course, but he was still derided for neglecting the existing facilities and setting up the next big flip. By the end of the decade, multiple offers placed the value of Pebble Beach at over $700 million. Then, in 1990, Japanese investor Minoru Isutani arrived as part of the wave of Japanese money that poured into the U.S. and raised eyebrows. A shadowy businessman who got his start selling door-to-door frozen potatoes and encyclopedias, Isutani rose to own golf courses in Japan and ride the real estate boom of the 1980’s.

Isutani acquired Pebble Beach for $841 million. To realize a return on his inflated investment, he planned to sell memberships at exorbitant fees. The strategy failed when the California Coastal Commission, a watchdog agency in charge of regulating land use, voted down his proposal on the basis that it would privatize a public golf course. By the end of 1991, Pebble Beach and its owners hit financial straits and even the 1992 U.S. Open that was to take place on the site was in peril.

Already sensitive to their deteriorating image in the U.S., several Japanese corporate titans arranged a backroom deal to buy out Pebble Beach for $574 million, restoring the financial health of the famed playground. With the blessing and relief of the USGA, which oversees the U.S. Open and also helped force the sale, Sumitomo Credit and Teiheiyo Club, Inc. became the new owners. The hapless Isutani walked away with a $267 million loss from his ill-fated venture.

By 1999, a diverse group of business, sports and entertainment executives were eyeing Pebble Beach with a mission towards golf preservation over financial gain. Led by Peter Ueberroth, former baseball commissioner, and Richard Ferris, former CEO of United Airlines, the two worked their rolodexes to raise $820 million from over 100 individual investors and take the property off the auction block, permanently.

A closed partnership since then, Pebble Beach would finally see more drama on the golf course than in the board room.

Other Articles Enjoyed: The Golf Caddie, From Handler To Hall of Famer, The Great Golf Marathon, Pro Golf Breaks Out