How to ruin a world series fix 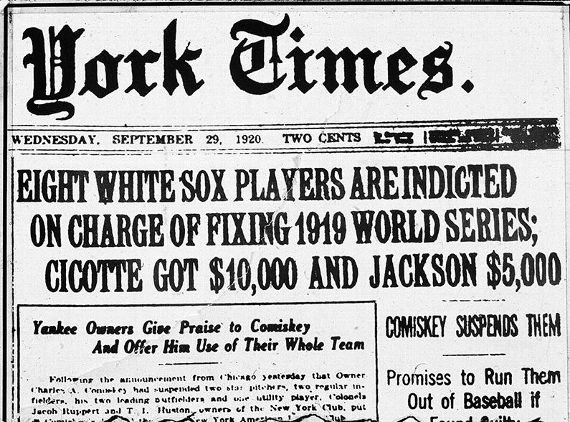 Towards the end of the 1920 baseball season, eight White Sox players and a group of gamblers were implicated in fixing the 1919 World Series. Their scam went awry even before the scandal broke out and they never collected the full amount of their expectations.
Posted Sunday, November 17, 2019 8:00 am

In the afternoon of October 1st, 1919, Chicago White Sox pitcher Eddie Cicotte took the mound at the opening game of the World Series. The Sox had recently clinched the American League championship and they were now favored to win the Fall Classic against the Cincinnati Reds.

In his second pitch at the bottom of the first inning, Cicotte proceeded to bean the lead-off hitter in the back. The errant throw was a deliberate signal to mob bosses that the fix was on.

At the close of that best-of-9 World Series, the Cincinnati Reds walked away with a 5-3 victory over the Chicago White Sox. The episode became known as the Black Sox Scandal, a notorious blow to the supposedly clean and wholesome sport that was America’s favorite pastime.

After months of follow-up investigations and grand jury testimonies, eight members of the White Sox team and five gamblers were implicated in a scheme to throw the 1919 World Series. Though all players were eventually acquitted at the trial, they were subsequently banned from the sport.

Among the disgraced names were star players such as “Shoeless” Joe Jackson, who still holds the third highest career batting average in MLB, Chick Gandil and Buck Weaver, both accomplished infielders who were World Series champions in 1917, and Eddie Cicotte, the knuckleball specialist who was one of the premier hurlers of his day.

Under normal circumstances, these talented athletes would have likely been inducted into the Baseball Hall of Fame, but their names would forever be associated with corruption around the game.

MLB is Rattled by a 3rd League

In the era of the ‘reserve clause’, long before the players’ union existed, ballplayers who were unhappily tied to their contracts became vulnerable targets for shady gamblers. Betting on games was not uncommon and fixing games was not unheard of.

During the 1919 regular season, rumors circulated that the 1918 World Series between the Boston Red Sox and the Chicago Cubs was fixed and that certain players were paid $10,000 to dump the games.

The two leading stars on the White Sox roster, Joe Jackson and Buck Weaver, made only $6,000 a year. The White Sox were also a fractured, disenchanted bunch and the little camaraderie that players shared was their collective hatred of owner Charles Comiskey, whom they regarded as a miserly tyrant that wouldn’t even pay for the cleaning expenses of their uniforms.

Though, Comiskey was no worst than the other baseball executives who kept their focus on gate receipts and exploited their players to deliver the best games to the paying public.

Towards the end of the 1919 regular season, White Sox first baseman Chick Gandil started having discussions with a gambling contact about fixing the 1919 World Series. He then tried to recruit willing members into the conspiracy.

Eddie Cicotte fell into the lure, needing the money to support his family and a new farm he had recently bought. Along with others who were intrigued by the idea, they all met that Fall at the Ansonia Hotel in New York City during one of the team’s trips.

The Greatest Fan to Occupy the White House

The group decided on a conditional upfront lumpsum payment of $80,000, and if the situation got complicated they would still be able to take the series in the back end.

The precise details of the infamous Black Sox affair remain opaque, but events got more tangled than anticipated. Word got out about the fix and multiple betting syndicates with dozens of intermediaries were now jumping into the fray, lining their own bets and bidding up offers from $80,000 to $100,000.

Arnold Rothstein, the underworld king of sports gambling, would allegedly have $270,000 riding on the series itself. Too many hustlers were now on the scheme, which fell into disarray as gamblers and ballplayers were no longer in sync and the camps began to “double-cross each other”.

By the end of the series, only a fraction of the original amount promised to the players would be delivered. The only player who actually did see an upfront payment was Cicotte, the starting pitcher.

Cicotte received $10,000 the night before the first game, but the others were now told they would be paid $20,000 after each game they lose (5 games for $100,000). As the series opened, G1 ended with the Sox losing 9-1 but no money was delivered. G2 saw Chicago lose again 4-2 with only half of the promised cash produced.

Angry and frustrated at the moneymen, the Sox conspirators then misled their interlocutors to believe they would lose G3, but they scripted their own designs and defeated the Reds 3-0.

The gamblers were now notified that the series fix would be off unless the original financial arrangement was kept. $20,000 was then hastily delivered before G4, which the Sox then rigged with a 2-0 loss. They then dropped G5, but once again found themselves stiffed by their financial connections.

The rogue athletes then changed their tactics and went on to take G6 and G7. At this point, some players and their families were threatened with danger if they failed to comply with their handlers’ expectations.

One theory why the pre-arranged money bags weren’t being honored is that cash was being skimmed by intermediaries. Abe Attell, a former boxing champ and part-time associate of Arnold Rothstein, was tasked with delivering the payments but he ended up betting much of it himself.

Attell was one of the gamblers who was later charged with planning to fix the World Series. Rothstein, as an alleged bankroller behind the scenes, was not actively involved in the conspiracy and he managed to avoid the indictments.

Even before the series began there was already a noticeable buzz around betting irregularities as the odds against Cincinnati were seen dropping. But after the Reds walked away with the championship title, public suspicions began to appear in the press.

Towards the end of 1919, The New York World  ran a scathing story about the state of baseball in America and recommended that federal judge Kenesaw Landis head a special investigation into the matter.

Unexpectedly, reports of another fix involving an insignificant 1920 summer header between the Chicago Cubs and Philadelphia Phillies unleashed an all-out subpoena call to baseball personalities around the country.

Cicotte was first to confess to the grand jury about the 1919 World Series fix, which had become a revelation following other unconnected investigations. With heartfelt regret, most of the White Sox players involved in the scam ended up admitting to receiving money but denied rigging the series with the intent to “defraud the public or bring the game into ill-repute”.

Nevertheless, the following day, after their trial acquittal on August 22, 1921, they were permanently banned from wearing the baseball uniform again. It was Kennesaw Landis, the newly-appointed Commissioner of Baseball, who sent them into exile.

For the next 25 years, Landis would exercise broad powers to restore the public’s trust in the game’s integrity. One of his hard-lined controversial decisions was to deny repeated reinstatement requests from players like Buck Weaver who allegedly knew about the scheme but failed to report it.

For the past 100 years, Major League Baseball remained relatively free of game-fixing scandals.