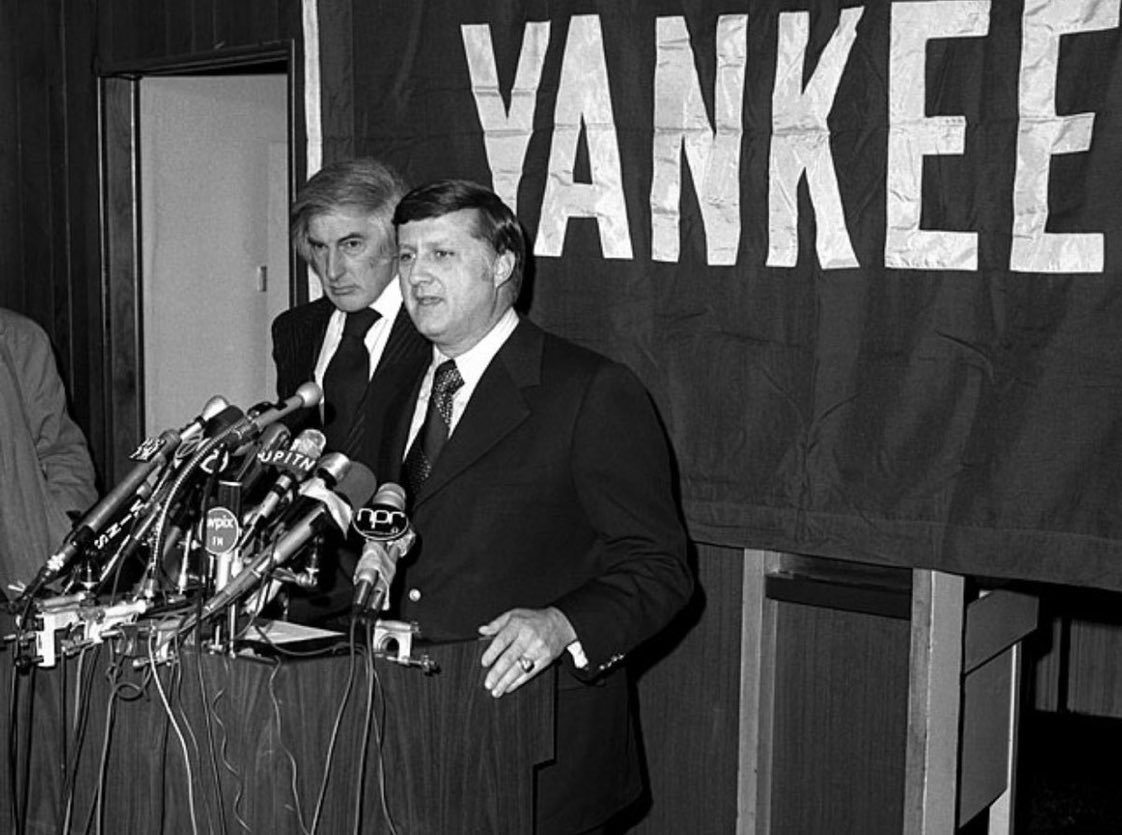 George Steinbrenner and Michael Burke (standing behind) announcing their purchase of the New York Yankees for $10 million on January 4th, 1973. The following year, Burke would be out the door as senior executive of the team and Steinbrenner would begin his imperious ownership of the club, turning the Yankees brand into today's $5 billion sports property.
Posted Sunday, July 19, 2020 8:00 am

It’s a jaw-dropping investment normally associated with the long-term vision and financial wizardry of a Warren Buffet.

In 1973, George Steinbrenner led a group of investors to purchase the New York Yankees for $10 million. Today, the Bronx franchise is worth $5.0 billion, more than any other sports team on the planet except for the Dallas Cowboys.

Like most ‘home run’ investments, the payoff was the result of timing, luck, and the shrewdness of the man behind the critical decisions.

Fifty years ago, the Yankees were a battered brand and a shadow of their former selves. The Mets were drawing more than twice as many stadium goers as their cross-town rivals and in the 8 seasons since CBS bought the ball club in 1964, the team finished no higher than 3rd in the league.

Nevertheless, the Yankees were still a brand with a rich history and deep roots in the nation’s biggest media market. Their new owner, a mid-Western shipbuilder with a flair for playing hard-ball business, would leverage the brand and squeeze every drop of the Yankees’ juice when it came to broadcasting rights and endorsement deals.

The pin-striped Yanks always held a special place on the podium of major league baseball. Their New York beginnings go back to 1903 when Frank Farrell and William Devery bought a Baltimore team for $18,000 and settled them in the Big Apple as the New York Highlanders.

Twelve years later, they sold their club, now renamed the Yankees, for $1.25 million. It was under the new owner, New York brew-master Jacob Ruppert, that the Yankees started winning titles and building a storied legacy.

In 1919, Ruppert made one of the most consequential hiring decisions in baseball history when he assumed Babe Ruth’s remaining 2-year contract with the Red Sox. The franchise won its first AL pennant in 1921 and its first World Series in 1923.

Over the next 42 years, the Yankees rose to become baseball’s reviled but respected aristocrats, clinching a World Series or a pennant on average every 1 ½ years. At the end of WWII, the team was sold to a triumvirate of investors for $2.8 million and by the mid-1960s, they fell into the hands of CBS for $13.2 million.

It was at this point that the Yankees’ winning trajectory came to a grinding halt. In 1965, the “Bronx Bombers” posted their first losing season in 40 years and the descendants of Ruth, Gehrig, and DiMaggio settled into a decade-long slump. No longer a sensible holding for CBS, the television network was now looking to unload their underperforming asset.

Steinbrenner’s personal stake in the Yankees was just $168,000 when the deal was first struck, or less than 2% of the total purchase price. By the time he died in 2010, the brash and bold businessman had wrested a majority control of the organization to hand his family heirs one of the greatest property assets in all of sports.

While his aggressive style left a trail of irate associates and enemies across the baseball landscape, the Ohio native ended up delivering 7 World Series trophies and 11 pennants to the city of New York.

The $10 million price tag for the Yankees was a bargain even for the time. New expansion teams such as the Seattle Pilots and San Diego Padres were formed at a similar cost despite the fact that neither carried the demographics of New York, nor the cache of the Yankees’ name.

The Cleveland Indians, the team Steinbrenner had unsuccessfully tried to buy earlier, went for $10.8 million. Years later, it became apparent that the effective cost of the Yankees was even lower at $8.8 million, since the transaction included two parking garages worth $1.2 million, both of which were soon flipped back to the network.

For CBS, the chemistry of the 12-man syndicate was the right fit, especially since the partnership included Michael Burke, the Yankees’ President under CBS. A year earlier, Burke had convinced the city of New York to finance the refurbishment of Yankee Stadium at the threat of moving the franchise across the river to New Jersey.

It was Burke as an insider who got William Paley, Chairman of CBS, to accept the basement price even though the Yankees were getting higher offers.

At the press conference announcing the takeover, Steinbrenner declared that he would remain an absentee owner. But a year later, his brute business tactics would be exposed. Burke was out the door as senior executive of the team, spelling the beginning of the hands-on “Boss” and his legacy of the C-suite revolving door.

Steinbrenner’s timing coincided with the advent of free agency. Looking to bring back the Yankees’ magic, he went on an expensive shopping spree, acquiring the likes of pitcher Catfish Hunter for a record $3.5 million, the highest ever paid for a baseball player at the time, and then home run slugger Reggie Jackson for $3 million.

Three years after CBS relinquished the team, the Yankees won 3 consecutive pennants and 2 World Series (1977, 1978). Notwithstanding the dysfunctional relationships raging inside the Yankee clubhouse, which got plenty of local and national headlines, the fans were back in the Bronx and the gate receipts were churning.

But the Yankees were still breaking even at best for most of those early years. The following decade brought in bigger money with a $50 million renegotiated radio deal (1987) and a $500 million television broadcasting arrangement (1988), both of which were eye-popping figures in the baseball world.

In 1997, the hard-charging man at the helm inked a $93 million licensing agreement with Adidas, infuriating the rest of the league owners since all licensing deals were supposed to go through MLB with an equal distribution of the proceeds. Wielding the Yankees logo like a warrior’s mallet, Steinbrenner ended up with most of the revenues at the objection of the league.

Then came the creation of the YES Network at the turn of the millennium, a regional sports broadcasting enterprise that aired Yankee games and other sports properties, becoming more valuable than the team itself on a standalone basis.

Later on, it was the Legends Hospitality Management, a concession venture with Dallas Cowboys owner, Jerry Jones, to supply stadiums and arenas with food, beverage, and merchandise retail.

In the end, Steinbrenner wasn’t the only professional sports team owner to expand into local broadcasting and merchandising, but what he accomplished with a $10 million investment in the Yankees brand was nothing short of a business rocket ship that traveled the farthest and the longest of any other sports team.

IF YOU ENJOY  OUR  CONTENT, PLEASE CONSIDER A VOLUNTARY DONATION TO SUPPORT OUR WRITING & JOURNALISTIC EFFORTS.