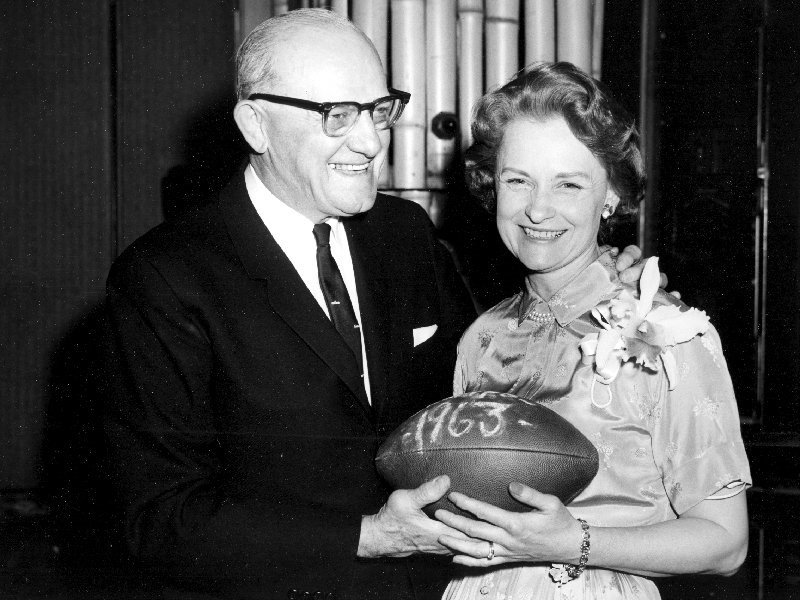 Virginia McCaskey, heir to the Chicago Bears, with her father George Halas who was team owner and founder.
Posted Sunday, January 13, 2019 8:00 am
By the Pro Football Hall of Fame

Virginia Halas McCaskey didn’t get her birthday wish following the Chicago Bears’ dramatic loss at the wild card game. But the grand dame of football who celebrated her 96th birthday on Saturday still has a rich heritage in her rear-view mirror.

Mrs. McCaskey is of course the principal heir of the Chicago Bears, having inherited the franchise from her father, the team’s owner and founder George Halas. Possibly the oldest professional sports team still controlled by the same family, the Bears and the Halas legacy date back almost a century.

In an exclusive one-on-one interview with the Pro Football Hall of Fame (interview), Virginia touches on growing up in Chicago in the early years when her father was an ordinary dad trying to support his family and the Bears were far from being the brand they are today.

Though too young to remember Red Grange’s exploits on the field, Virginia, along with her mother and younger brother, followed Grange on his barnstorming tour across the country. The family traveled by train east to New York and then south to Florida, at which point her mother decided she “had enough” and came back home.

A three-time All American from the University of Illinois, Grange signed up with George Halas in 1925 to a grueling 19-game,17-city, 67-day tour. His star power presence helped legitimize professional football in an era when fans rallied primarily around college football.

Following a successful tour, Grange and Halas staved off a likely demise of the financially-strapped Bears team and possibly the NFL itself. Years later, Grange would return and lead Chicago to two consecutive NFL championships, in 1932 and 1933.

The Great Depression imposed additional financial hardships during the Bears’ formative years. Virginia remembers when her father was often away from home, managing different projects to make ends meet for the family. In 1933, he stepped into the coach’s shoes when he could no longer afford to keep a head coach.

The elder operated the club with a notion that pro football was not a career, but a stepping stone to something else in a man’s life. Virginia recalls how her maternal grandmother used to invite players who had no family in Chicago for Thanksgiving dinner. They formed close friendships that continue today among their descendants.

The nonagenarian matriarch with dozens of grand kids and great-grand kids has attended 5 of the Bears’ 9 title games since she was born. She assumed the corporate helm in 1983 when her father passed away. Her brother George “Mugs” Halas, Jr. was originally slated to take over though he died in 1979 from a heart attack.

But in her words, Virginia always saw herself as a “mom more than a boss” and that’s how she preferred it. Two of her sons were team Presidents and her husband, Ed McCaskey, was also active as chairman until he became deceased in 2003.

Two years after Virginia took charge of the executive suite, the Bears clinched Super Bowl XX, their first and last to date. That season, Chicago’s formidable defense carried the team to a 15-1 stellar record, losing only a single game to the Miami Dolphins.

One of her firm decisions following the Super Bowl was to disband the Honey Bears, the team’s cheerleading squad. Arguing that such field performance was sexist and degrading to women, Virginia ended their affiliation which was put in place by her father in 1976.

The Bears reached the playoffs through most of the 1980’s, but then hit a slump in the 1990’s. By the end of the decade, the influential lady of football fired her son Michael and elevated Ted Phillips to the position of President & CEO. He was the first top level executive outside the Halas-McCaskey family.

Throughout the years, the highs and the lows, Virginia never contemplated selling the Bears. She is quoted saying that the team “will remain in the family until the second coming”.

Approaching a centenary of Bears and pro football, the NFL and their fans have a rich connection to the past through Virginia McCaskey. Happy 96th birthday to the grand dame!

Located in Canton, Ohio, the Pro Football Hall of Fame honors exceptional figures who contributed to the history and excellence of professional football.

Other articles enjoyed: The First Super Bowl, Less Than Super, Nature's Fury On The Grid Iron, 70 Years of NFL Relocations