Japan re-emerges on the world stage 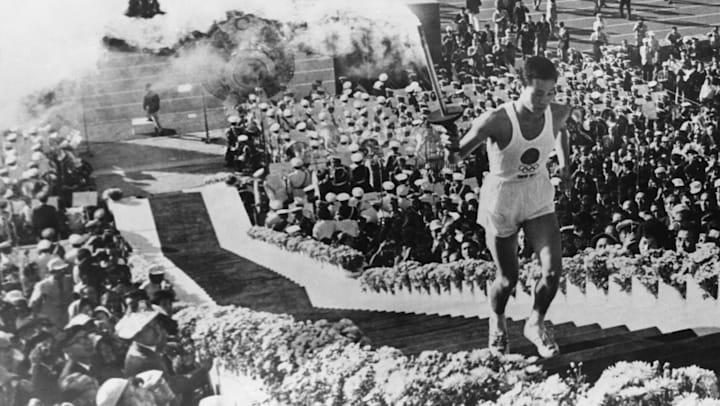 Tokyo torchbearer Yoshinori Sakai makes his way to the cauldron to light the Olympic flame. The 1964 Games saw Japan re-emerge into the world community.
Posted Sunday, June 20, 2021 8:00 am

Nearly 2 decades following the end of World War II and a dozen years after the Americans ended their occupation of Japan, the island nation was back in global focus. But this time, it was a peaceful country that was welcoming the world to the Games of the XVIII Olympiad.

Just days after the U.S. dropped 2 atomic bombs on the cities of Hiroshima and Nagasaki to force an end to the war, Emperor Hirohito delivered a public radio speech to his people announcing Japan’s surrender. The same man would now open the Olympic Games on October 10, 1964 in front of 85,000 spectators at Tokyo’s National Stadium.

Loaded with symbolism, the Olympic flame was lit by 19-year-old Yoshinori Sakai, a non-competing student athlete who was born in Hiroshima on the same day the atomic bomb fell on the city. Running into the stadium and making his way towards the cauldron while carrying the Olympic torch, Sakai embodied the spirit of Japan’s post-war renewal and reconstruction.

It was the first time the quadrennial event was staged in an Asian city and the first time the tournaments were telecast live around the world. An estimated 600-800 million viewers tuned in from all 5 continents to witness over 5,000 athletes compete in 19 different sports.

Recognizing the significance of the moment, the Games were captured and immortalized in a film called “The Tokyo Olympiad”, a critically-acclaimed cinematic production that later became a staple of school screenings and public showings across Japan.

Japan was originally slated to host the Olympics in 1940, but the country’s military belligerence in China and the outbreak of WWII forced the event’s cancellation. Similar to Germany after the war, the Pacific nation was punished by being shut out from the 1948 athletic competitions in London.

Eager to showcase their industrial and technological accomplishments since the bleak days of 1945, Japanese officials introduced the world to The Shinkanzen, or the ‘bullet train’, whose completion was timed with the start of the Olympics. Service on the world’s most advanced railway began just days earlier with a 320-mile, 4-hour trip from Tokyo to Osaka.

The Parade of Nations saw Nigeria march under a new independent flag, while South Africa was absent for the first time since 1904, having been excluded by the International Olympic Committee for their apartheid policies. The country wouldn’t return to competition until the 1992 Barcelona Games.

Germany entered the tournaments as the United Team of Germany, their 3rd and last appearance together before breaking up into West Germany and East Germany for the next 6 Olympiads. Wearing navy-blue blazers and sporting cowboy hats, the American delegation was 346-athlete strong with 267 men and 79 women. Bearing the flag at the head of the procession was Parry O’Brien, a shot put champion who clinched gold and silver at the 1952, 1956, and 1960 Olympics.

In the gym and on the field, there were no shortages of new records and Olympic ‘firsts’. Judo and Volleyball, both popular sports in Japan, were introduced to the Games for the first time. The host nation claimed gold in 3 of the 4 Judo categories (lightweight, middleweight, heavyweight) and silver in the Open category.

Nicknamed the “Oriental Witches”, the Japanese female volleyball team stunned the West with their rugged athleticism, dispelling preconceived notions that Japanese women were universally delicate and demure. Seen leaping, diving, and even bleeding during their arduous training sessions, they defeated the heavily favored Soviets to win gold.

Masae Kasai, Captain of the “Witches” squad, went on to help coach the Chinese volleyball team in later years, paving the way for that country’s dominance in the sport during the 1980s.

On the track, Ethiopian runner Abebe Bikila became the first person to win the Olympic marathon twice. Four years earlier, he took the top prize running barefoot on the streets of Rome, clocking the 26.2-mile distance in 2:15:16. He broke it in Tokyo clearing the finish line and setting a new world record in 2:12:11.

From the USSR, gymnast Larisa Latynina took home two gold, one silver, and two bronze medals in the Team, Floor Exercise, All-around, Vault, Uneven Bars, and Balance Beam. It was the third and final Olympiad for the Russian prodigy who would lead the world with 18 Olympic medals for the next 48 years.

However, it was Latynina’s rival, Czech floor artist Vera Caslavska, who was crowned queen with 3 gold medals in the All-around, Vault, and Balance Beam competitions. She would later add another 4 top accolades to her portfolio at the 1968 Mexico City Olympics to cap off an illustrious gymnastics career.

In the swimming pool, 15-year-old Sharon Stouder of California captured 3 gold: the 100m butterfly, 4x100m freestyle and 4x100m medley, plus a silver in the 100m freestyle. Her performance was only exceeded by that of fellow male swimmer, Don Schollander.

Unbeknownst to two American champions, the Tokyo Games were also the beginning of their professional athletic careers. Track & Field star Robert Hayes nabbed 2 gold medals in the 100m dash and 4x100m relay before spending 11 seasons with the Dallas Cowboys where he won Super Bowl VI as a wide receiver.

Joe Frazier, a boxer who landed gold fighting with a broken thumb in the Heavyweight division, turned pro the following year. He went on to clinch the WBC and WBA Heavyweight titles in 1970 and then defended them successfully against another triumphant Olympian, Muhammad Ali.

Overall, the U.S. emerged from the Tokyo Games with the most gold medals at 36 (90 total), followed by the USSR at 30 (96 total), and Japan at 16 (29 total). Japanese athletes would not match the same level of success until the 2004 Olympics in Athens.

For the host nation, the grandeur and importance of the 1964 Olympics were a watershed moment in post-war Japan, which would witness urban development, economic growth, and a newly-ignited passion for sports.

Other Articles Enjoyed  When Carter Recruited Ali to Boycott the Olympics, The Most Violent Match in Olympic History,  One Man and a Weightlifting Revolution