Remembering the 1970 Boys from Brazil 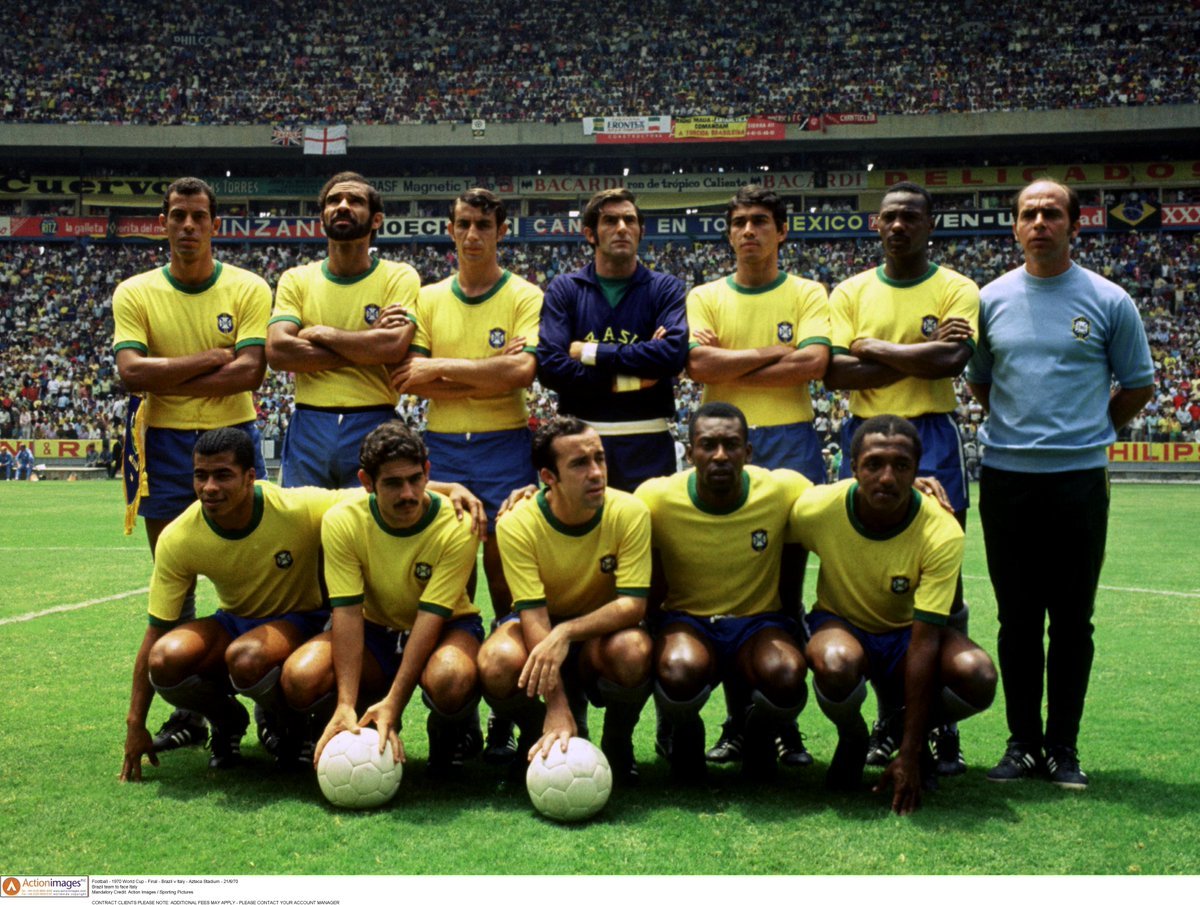 The 1970 Brazil national team. Regarded as the greatest squad ever assembled in international soccer, they went undefeated at the qualifiers and at the 1970 World Cup. Kneeling second from right is the iconic Pele who accounted for more than half the team's goals at the Cup, either directly or by assists.
Posted Sunday, June 21, 2020 8:00 am

In the land where soccer holds a special place between heaven and earth and the Gods are worshipped for their ball-handling skills, Brazilians were flying high in the sky following their victory at the 1970 World Cup. Fielding the greatest squad ever assembled on the international stage, the South American powerhouse delivered a feast for the eyes when they choreographed an undefeated run to win their 3rd Jules Rimet Trophy. A half-century on, the squad’s dazzling display of soccer elegance is still remembered as one of the greatest performances in Cup history.

They hailed from all corners of Brazil with colorful nicknames like Jairzinho, Rivelino, Tostao, and the undisputed king, Pele. Captained by 25-year old Carlos Alberto, the national team was determined to reverse the misfortune they suffered at the 1966 World Cup in England when they were dispatched in the opening rounds. It was a humbling experience for the master footballers whose flair and creativity on the pitch succumbed to the more physical style of play practiced by their European counterparts. In the three months leading up to the 1970 Cup in Mexico, the team concentrated on two essential training exercises: physical strength to take on the Europeans, and stamina to conquer the oxygen-poor, mile-high Estadio Azteca in Mexico City.

Pulling the strings on the offense was Pele with 81 caps. Just six months earlier, the Brazilian legend had scored the 1,000th goal of his career playing for his home team, Santos. Introduced to the world at the 1958 Cup in Sweden, the precocious 17-year old managed 5 goals in his international debut: 3 in the semi-finals to put away France, and 2 in the final to vanquish the host. In Mexico, he would account for more than half of Brazil’s 19 goals, either directly or through assists. The only other member of the 1970 squad who ran the field with Pele in Sweden was Mario Zagallo, now coach of the national team. Both had shared the forward line when Brazil raised their 1st trophy in Sweden and their 2nd trophy in Chile (1962). Coming together for a third time, the revered veterans were now representing their country in Mexico as coach and player.

It was the first time in the Cup’s 60-year history that the competition was held outside Europe. It was also the first time the event was broadcast globally on television. Cross-border free agency was rare and none of the members of the Brazilian squad played professionally overseas. Pele was no exception, though not for lack of interest by European recruiters. Several foreign clubs had come calling for his talents and Gianni Agnelli, owner of Fiat and Milan’s Juventus FC, even offered Pele a share in the auto giant in exchange for joining his franchise. But Pele was a ‘hands-off’ asset, officially and legally declared a national treasure by the Brazilian government. For that privilege, he was also the highest paid athlete in the world for a period of time.

Less famous, but still highly celebrated for their exploits on the pitch were the rest of the home-grown players. Some started their professional careers when they were just 15 years old, playing in the country’s premier league for teams like Santos, Cruzeiro, Botafogo, Sao Paolo, and Corinthians. Developed at a young age and unleashed to the Brazilian fanbase, they played a myriad of styles but focused on combination tactics and quick instincts. Tricks, dummy moves, and back plays were signature hallmarks of Brazilian soccer. Like bees buzzing around a hornet’s nest, they moved in and out and around the goal area, creating countless plays and opportunities until they found the net.

In Mexico, the diminutive and intelligent Tostao who later went on to become a medical doctor, was a formidable left-footed playmaker who ended up scoring 2 goals for Brazil. Jairzinho, the right winger from Botafogo, landed a shot in each game for a total of 7 goals. Rivelino, the mustachioed sensation who had perfected the “flip flop” move that would be copied by future generations, contributed 3 to the tally. Gerson, the laser-passing midfielder said to be the brains behind the team, and Carlos Alberto, Pele’s teammate at Santos and one of the greatest defenders of all time, each added a point in the final to help bring home the trophy.

The magic started at the opener against Czechoslovakia when Rivelino launched a powerful free kick that bent into the goal and was dubbed the ‘Atomic Kick’ by Mexican fans. Pele added to the thrill when he chipped a ball from 70 yards away over the head of the goalkeeper, missing the net by mere inches and sending gasps across the stadium. Facing England as their biggest test in the tournament, Jairzinho found the only goal of the match at the 59th minute but Pele delivered the mouthwatering play in the first half. Taking an aerial cross from the other side of the post, he leaped like a fish snapping out of water to head the ball into the corner, but was denied with a spectacular save by keeper Gordon Banks.

In the knockout stage, Brazil faced Peru in the quarter-finals. The latter had achieved the unachievable during the qualifiers when they beat mighty Argentina for a berth at the Cup. In Brazil fashion, the yellow jerseys outplayed their neighboring kin around the goal, disorienting the keeper with a flicked pass over his head and another run-around play that slotted the ball into an empty net. But the most spellbinding moment came at the semi-finals against Uruguay when Pele, rushing head on towards an on-coming goalie, dummied the pass from Tostao and then circled around the keeper to try to make the score. His shot went wide, but the mesmerizing display would remain frozen in World Cup lore.

At the final, it was the forward, free-flowing strategy of Brazil versus the defensive-minded, counter-attack football of Italy. Pele started it off with a header into the Italian net following a perfect cross from Rivelino. Fittingly, it was Brazil’s 100th goal at the World Cup since the nation started playing in 1930. The Europeans equalized before half-time, but the South Americans came back in the 65th minute with a 20-yard diagonal missile from Gerson. It was followed up with a header pass from Pele, to Jairzinho, and into the net. Minutes before the clock ran out, Pele took a ball from the left flank, stood over it for a split second, and then almost casually rolled into the path of a charging Alberto who smashed it into the goal.

As if the team’s captain was handed the honor of placing the last goal of the last match of the Cup, Brazil capped off the tournament with an unforgettable 4-1 finish over Italy. Not only had the new world champions won every single game in Mexico, but they also went undefeated during the qualifiers, giving the 1970 boys from Brazil a unique place in the top podium of international soccer.