In 1931, German race car champion Rudi Caracciola was asked to deliver a custom-built vehicle to a special client. 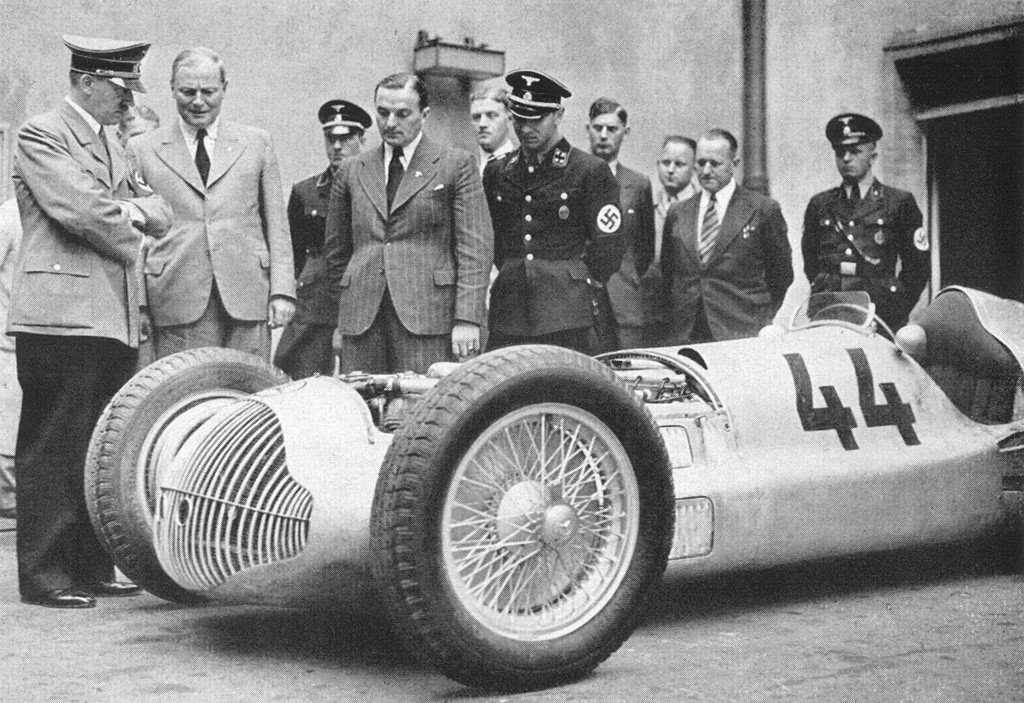 Adolf Hitler (far left) inspecting one of the 'Silver Arrows' developed by Mercedes and Auto Union. With government subsidies, the race cars were used to showcase Nazi propaganda as they dominated the Grand Prix circuits in the 1930s.
Posted Sunday, February 21, 2021 8:00 am

In 1931, German race car champion Rudi Caracciola was asked to deliver a custom-built vehicle to a special client. It was a 7.7 liter, black convertible Mercedes with bulletproof windows, steel-plated side panels, and a glove compartment fitted with a hidden pocket for a revolver.

The request for the delivery came from Wilhelm Kissel, CEO of Daimler-Benz, and the special client was Adolf Hitler.

Hitler was a car enthusiast and even had a portrait of Henry Ford hung in his office at the Nazi Party national headquarters in Munich. The fascist leader was still 2 years away from the Chancellorship and 8 years from unleashing war on Europe, but his head was already swirling with ideas of German automotive nationalism.

For years, Munich’s Mercedes dealership supplied discounted vehicles for Hitler’s cross-country political campaigns. Daimler-Benz, the parent company that produced the cars, advertised in Nazi newspapers and its board members helped raise funds for the party.

For the industrial concern, that relationship paid off when the Nazis seized power in 1933.

One of the Fuhrer’s first major public speeches after taking office was at the opening of the prestigious Berlin Motor Show. The Nazi leader announced his intention to cut taxes and regulations on the country’s automotive industry, build a nationwide highway system, and dominate international motorsport.

Reeling from the Great Depression, Germany was weighed down by bank failures, corporate bankruptcies, massive unemployment and political instability. Car and truck sales were half what they were 5 years earlier and Hitler’s goal of crushing labor unions and reviving a military-based economy was welcome news for the auto companies.

International racing was one area where the new Germany could showcase its superior engineering and boost car sales.

For most of the 1920s and early 1930s, victories at the European Grand Prix races belonged primarily to French (Bugatti) and Italian (Alpha Romeo) constructors. With a few exceptions, German cars and drivers lagged at the elite racing podiums.

But in 1931, Rudi Caracciola, a rising star behind the wheel, won the German GP and then the Italian open road Mille Miglia, both in a Mercedes SSK. Designed by Ferdinand Porsche before he went on to found his own company, the SSK entered the tracks in 1928 and was a supercharged, agile racing vehicle that reached top speeds of 120 mph.

As the Nazification of German life started to take hold, auto racing was no exception. Adolf Huhnlein, a roughneck associate of Hitler since the failed Beer Hall Putsch of 1923, was put in charge of the National Socialist Motor Corps (NSKK), the country’s motor clubs association.

The NSKK trained legions of men in motor skills, eventually forming the core of the Wermacht’s mechanized army. All race car drivers had to become members of the NSKK.

German racing teams did not enter the leading Grand Prix events of 1932 and 1933. For 1934, Daimler-Benz requested 1 million marks from the Reich for a racing subsidy, but received only half. The government grant was also shared with Auto Union, since Hitler believed that 2 competing racing enterprises will further Germany’s international standing.

Mercedes ditched the old SSK cars and develop the revolutionary W25, a lighter machine that kicked up to 500 hp. Auto Union released the P-Wagen, a vehicle designed by Porsche who now joined Auto Union. With their sleek, aluminum cast bodies, both cars resembled silver bullets on wheels and were dubbed the ‘Silver Arrows’.

The shiny tubular speedsters were unveiled to 80,000 mesmerized spectators at the 1934 French GP. Aerodynamic and futuristic, they took the international racing world by storm and made the competition appear like antiquated clunkers. Eager onlookers were cordoned off at a distance to avoid revealing the secret works under the hood.

More German victories followed and for the next 4 years, the Silver Arrows would outmatch their French and Italian counterparts at many of the premier Grand Prix events.

Rosemeyer even gained notoriety across the Atlantic when he took the checkered flag in a Silver Arrow at the 1937 Vanderbilt Cup in Long-Island, New York. On the victory mast at Roosevelt Raceway, the swastika flag fluttered in the breeze.

Off the race track, German cars returned to the showroom. Production figures grew by double digits every year, exports rose, and profits were back. At the same time, the implements of war were also rolling out of the Daimler-Benz factories such as military trucks and armored vehicles.

Mercedes’ W25 was succeeded by the W125, an 8-cylinder 600 hp racing beast. Auto Union answered with a new generation of the P-Wagen. In 1937, both were retrofitted for a land speed duel between two of Germany’s most celebrated drivers, Caracciola and Rosemeyer.

Taking the wheel of a closed seater shaped like a spaceship, Caracciola recorded 268 mph on a one-mile stretch, a new world record. Rosemeyer followed with a P-Wagen, but lost control and was killed in a crash.

Despite Rosemeyer’s death, the propaganda appeal of a German car breaking world land records was not lost to Hitler and his cohorts. In general, with NSKK oversight, the Third Reich’s participation at the Grand Prix was accompanied by all the Nazi pomp and glory.

The auto companies, whose racing coffers were filled with government support, found it best not to interfere.

By the end of 1935, Germany’s new racial laws reached motor racing as well. Auto pilot Adolf Rosenberger was instrumental in founding Porsche GmbH and creating Auto Union, but as a Jew he was denied a license to compete.

Rene Dreyfus, an accomplished French driver whose father was Jewish, was refused a place with the Mercedes team. Both Rosenberg and Dreyfus fled Europe for the U.S.

The Silver Arrows kept winning Grand Prix races into the summer of 1939. In the 6 years since Hitler rose to power, the Nazis came to monopolize speed and prestige on the automotive race track, but it would all come crashing down with the outbreak of WWII.

Other Articles Enjoyed: Ford Takes on Ferrai, NASCAR Lands on the Map,  Deadliest Race on the Planet