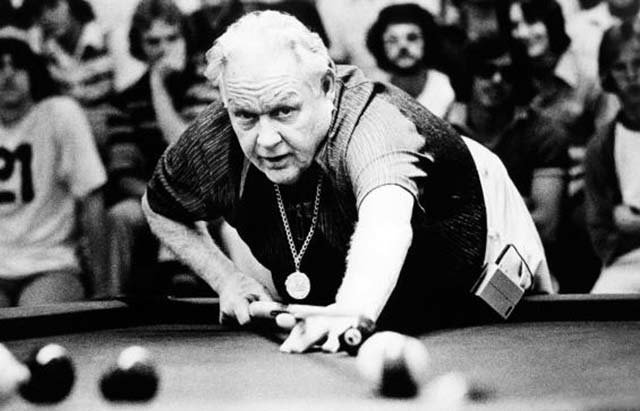 Minnesota Fats cuing for a shot. An irrepressible showman, he was pocket billiards' greatest hustler.
Posted Sunday, January 27, 2019 8:00 am

Twenty million Americans tuned in to ABC’s Wide World of Sports on Valentine’s Day, 1978 to watch a champ and a hustler duke it out.

Dressed in a tuxedo and holding the mic, renowned sports announcer Howard Cosell made the ringside introductions and delivered the play-by-play. The event wasn’t a boxing match, but a billiards competition between Willie Mosconi and Minnesota Fats.

White-haired and in their mid-60’s, the old-timers racked it up at New York City’s Waldorf-Astoria Hotel in front of the largest TV viewership ever for a cue game.

Mosconi and Fats were vestiges of pool’s glory days in the 1940’s and 50’s. Both came up during the depression and played in an era of smoke-filled parlors and basements that were home to rogues and gamblers.

In their day, only a few establishments offered elegance and ambiance for discerning players. Philadelphia’s Allinger’s was one of those plush venues that was known to draw top talent, including Mosconi and Fats. Allinger’s even provided ‘rack girls’, or young women who would reset the balls after each game.

Mosconi grew up in that town and learned his craft at a young age. His father ran a pool hall but locked up the cue sticks so his son will pursue other interests. But young Wille found a way to hone his skills by using a broomstick to shoot potatoes on the pool table.

Around the same time, Rudolf Wanderone Jr. roamed his upper West Side neighborhood in Manhattan, looking for pool action in bars and saloons and earning the nickname New York Fats. Later on, he managed a gaming hall in southeast Washington, DC, cued balls and talked big in the Mid-West, and hustled cash from sailors in Norfolk, Virginia.

An irrepressible showman with a flair for windbag stories, Fats was more of a trickster and entertainer than a great champion of the art.

Always carrying wads of hundred dollar bills rolled in his chest pocket, Fats never won a major pool tournament. But his sideshow verbal antics nonetheless made him one of the most recognizable and colorful figures in the circuit.

Mosconi couldn’t have been any more different. Dapperish and all-business, he was synonymous with the table sport itself. He won the World Straight Pool Championship 15 times, the most of any other player.

At an exhibition game in Springfield, Illinois in 1954, Mosconi officially sunk 526 straight balls, a record that still holds today.

The two mixed like oil and water. A consummate professional, Mosconi tried to elevate the recreation of pool above its sordid image and he disdained Fats for perpetuating its negative stereotype.

Mosconi’s game was straight pool (using all 6 pockets), while Fats preferred the one pocket (just a single designated pocket for each player).

For his part, Fats’ feud with Mosconi stemmed from the 1961 film “The Hustler”. Mosconi was the billiards consultant on the movie set, which starred Paul Newman as ‘Fast Eddie’ Felson and Jackie Gleason as Minnesota Fats.

After the film was nominated for nine Academy Awards and won two, Best Art Direction and Best Cinematography, New York Fats rebranded himself as Minnesota Fats, arguing that Gleason’s screen persona was fashioned after him.

But Mosconi always refuted that claim, pointing out that the character was taken from the original novel “The Hustler”, written by American author Walter Tevis. Mosconi joked that Fats had never even been to Minnesota.

In front of national TV, the celebrity duos were now squaring off in a 5-set tournament showdown. At stake was honor, legacy and a $15,000 cash prize for the winner.

It was artistry versus bravado, discipline versus theater.

In his characteristic style, Fats tried to distract his opponent by drawing laughs from the audience with his comical quips and banters. At one point, Cosell edged him back to his seat, petted his girth, and urged him to be a “good boy”.

Mosconi died in 1993 and Fats followed three years later. Leaving a rich legacy, their rivalry and different styles only served to enhance the popularity of pocket billiards in America.