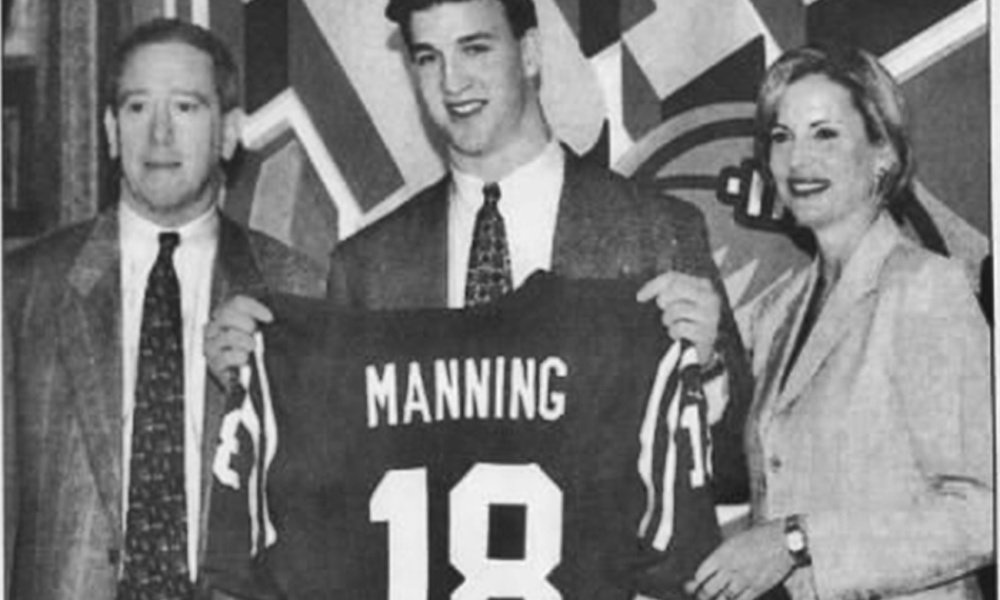 Peyton Manning at his NFL induction ceremony in 1998. Drafted by the Indianapolis Colts as the first overall pick, Manning would transform the city's sports culture and deliver their first Super Bowl ever in 2006.
Posted Sunday, October 13, 2019 8:00 am

In 2017, Tom Brady broke Peyton Manning’s record as the oldest quarterback to win a Super Bowl. In 2019, the New England Patriot surpassed him again, this time as the 2nd ranked leader in passing yards for the regular season. But Peyton Manning is certainly not falling short of record achievements and the Louisiana native who spent his NFL career with the Indiana Colts and then the Denver Broncos will always have something unique over his pursuers: he transformed a deeply-rooted basketball state into an enduring football fandom.

His contribution to Indiana’s football culture was profound. The heralded quarterback from the University of Tennessee joined the Indianapolis Colts in 1998 and left fourteen years later as an iconic sports hero. During his tenure with the Colts, Indianapolis switched from a basketball-entrenched community to a football-loving city. Indiana’s sports narrative had always centered around the game of basketball. A 1954 state championship game between two Indiana high schools was even an inspiration for the 1986 movie “Hoosiers”, which became a national box-office success. Loosely based on a true story, the film centers around a small rural high school team that clinched the state championship after defeating a much larger school. A sports tale from the American heartland, “Hoosiers” was selected by The Library of Congress for preservation to its National Film Registry.

Legendary coach Bobby Knight lit up college basketball when he led the Indiana Hoosiers to three NCAA titles in 1976, 1981 and 1987. The 1976 squad is still the last NCAA men’s basketball team to go undefeated when they posted a 32-0 season and took down the Michigan Wolverines 86-68 at the Final. While the Boston Celtics’ Larry Bird was one of Indiana’s most popular basketball sons, it was Reggie Miller’s arrival to the Indiana Pacers in 1987 that elevated the state’s passion for hoops to the professional ranks. Quickly becoming the face of the franchise, Miller helped the Pacers become solid playoff contenders, culminating in an NBA Finals appearance in 2000, though they succumbed to the Los Angeles Lakers 4-2 in the end. The Pacers had locked 3 championship titles in the early 1970s when they played in the ABA, but 2000 was the closest the franchise would come to hoisting a national trophy after the NBA-ABA merger (1976).

The historical roots that grounded the basketball scene in the Hoosier state came crashing down at the turn of the new millennium. Bobby Knight was fired in 2000 for unbecoming behavior towards players and students. From 1995-2001, the Hoosiers also failed to clinch the Sweet Sixteen after years of being regular fixtures at the NCAA tournament. 2004 saw Pacers forward Ron Artest ensnare his team in one of the ugliest fracas moments in the annals of the NBA, an episode that became known as the “Malice in the Palace”. Following a physical altercation among players and fans in a game against the Detroit Pistons, Artest was suspended for the rest of the season and missed 86 games, the most of any player in league history for an on-court incident. The time was ripe for the Hoosier State to find a star in a different sport and it came in the form of Peyton Manning and the Indianapolis Colts.

The New Orleans native breathed life into Indianapolis. Drafted in 1998 with the first overall pick, Manning struggled in his rookie year as the team went 3-13. But the following season witnessed a turnaround as the young quarterback helped flip the chart to 13-3. From 2000-2010, the Colts put on one the NFL’s most dominant stretches, placing second behind the New England Patriots and winning on average 11½ games per season. Manning was a Pro-Bowler for most of that decade, collecting prestigious accolades multiple times, such as the NFL MVP (5x), First Team All-Pro (5x), Passing Leader (3x), and Passing Touchdowns Leader (3x). Along with head coach Tony Dungy, Manning brought Indianapolis its first Super Bowl trophy in 2006. The Colts had clinched their first championship in 1970 when they were based in Baltimore, but after moving to the Midwest in 1984 even a Conference title proved to be elusive. Under a rainy sky on February 4, 2007 in Dolphin Stadium, Miami Gardens, Florida, the Colts faced off against the Chicago Bears, another hungry team that was suffering from a 2-decade title drought. Trailing 14-6 in the 1st quarter, the Colts reversed their misfortune and eventually won Super Bowl XLI 29-17. For his part, Manning took home the MVP award, completing 25 of 38 passes for 247 yards and a touchdown.

Evidence exists that the 14x Pro-Bowler turned Indianapolis into a football city. A study by the Sports Innovation Institute at IUPUI indicates that the Colts and the NFL rank significantly higher among local fans than any team or league associated with basketball. Even in aggregate, the state’s basketball votes- Pacers, Fever, IU, Butler, Purdue, Notre Dame- come short of the Colts football franchise. Manning became the first player to have his jersey retired by the Colts since they moved from Baltimore. In October, 2017, his contribution to the  city's stature as a football town was immortalized with a 9-foot, 6-inch bronze statue of himself outside Lucas Oil Stadium. His name was also added to the “Ring of Honor” encircling the complex. Beyond the game, Manning has been visibly active in local charity, donating to the Peyton Manning Children’s Hospital and receiving the Living Legend award by the Indiana Historical Society. Though he later went on to join the Denver Broncos and win Super Bowl 50 with that team, the greatest passer of his generation left Indiana with an indelible and undeniable football legacy.  This article was adopted and expanded from its original, written in November, 2017 by David Pierce of IUPUI.

Other Articles Enjoyed:  Celebrating Virginia McCaskey, A Case For Polynesians In The NFL, For Every Winning Streak