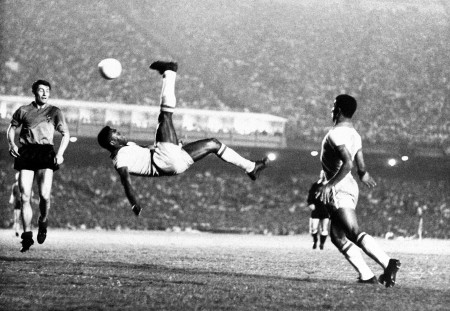 How do you keep a home-grown sports phenom from leaving his country for greener pastures? Turn him into a national treasure, legally.

In 1977, soccer’s greatest player of all time retired after amassing a record 1,281 career goals. Pelé reached global iconic status at a young age but unlike his compatriots on the field today, the dazzling ball handler limited his career to Brazil and never signed with a European club.

Pelé burst on the world scene at the 1958 World Cup, scoring 3 goals against France in the semis and netting 2 against Sweden at the final; he was only 17 at the time.

An especially sweet victory for Brazil, the country’s 1958 performance on the field shed the specter of its notorious loss at the World Cup eight years earlier.

In 1950, 200,000 spectators watched in disbelief as Brazil’s vaunted team succumbed to Uruguay 2-1 at their own Maracana Stadium in Rio de Janeiro. The match is still remembered today as the Maracanazo, or the “Maracana Blow”.

Locally, Pelé was already a sensation with Santos FC, the professional squad he joined as a 15-year old dribbling-shooting-scoring prodigy. He would remain on their roster for 19 years and win 10 league championships.

In between, the footballer helped lead the Brazilian national squad to various regional titles and three World Cup crowns- ’58, ’62, ’70.

Born Edson Arantes dos Nascimento, Pelé was a complete soccer sportsman, embodying speed, power and technique with an added flair for anticipating game situations. He started off as an attacking forward but later dropped back to playmaking formations where his creativity electrified the field.

Contrary to popular belief, the 5’7” Pelé did not invent the bicycle kick (photo above). It was first used by Leonidas da Silva, a star compatriot of an earlier era, who was also top scorer at the 1938 World Cup.

Soccer luminaries like Didi and Vava had already signed up in Europe and rumblings of Pelé leaving the country was a disheartening prospect for the millions of idolizing fans.

Real Madrid made an enticing offer and Fiat’s Giovanni Agnelli, owner of Juventus, even offered Pelé a share in the Fiat car company in exchange for joining the Italian franchise.

But in a bizarre interplay between politics and sports, Brazil’s President at the time, Janio Quadros, possibly trying to stave off his own waning popularity, pushed a bill through Congress declaring Pelé a national treasure. The 1961 act effectively made Pelé a hands-off sovereign asset for at least 10 years.

The star footballer didn’t miss out on compensation since for a time, he was the highest paid player in the world. Pelé traveled extensively and was his country’s top international goal scorer in tournaments and friendlies.

At a 1967 exhibition game in strife-torn Nigeria, the warring parties declared a 48-hour cease fire so all could watch the virtuoso perform with his team.

Past his prime in 1975, Pelé came out of semi-retirement to play for the New York Cosmos and help build American interest in the “Beautiful Game”, as he famously coined the sport.

With great fanfare, he closed out his career on October 1, 1977 in a packed Giants Stadium in New Jersey, switching sides at half time between the NY Cosmos and Santos FC.

A fitting exit for a soccer legend.