Maryland, Basketball Feeder of the 70s-80s

A hoops system from grade school to the pros 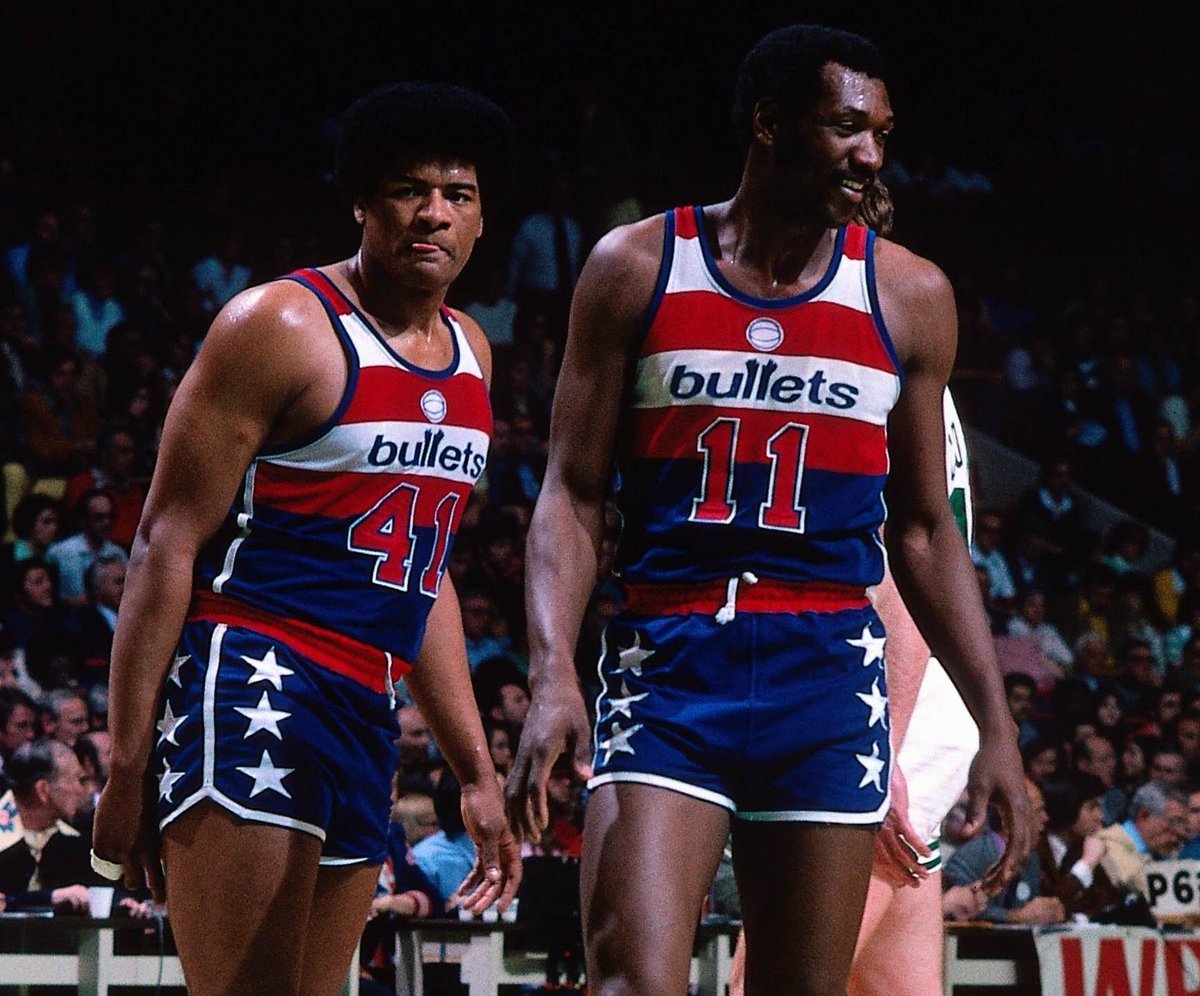 Wes Unseld (left) and Elvin Hayes of the Washington Bullets shown in 1978. From high school, to college, to the pros, Maryland's basketball scene was unequaled in talent during the 1970s and 80s.
Posted Sunday, May 9, 2021 8:00 am
By Jonathan Yates, sports writer and talk show host

For much of the 1970s and 1980s, basketball was dominated by Maryland’s Riva Road to River Road Corridor ("The Corridor"). Running from Washington, DC to Baltimore and encompassing portions of Montgomery, Anne Arundel, and Prince George’s counties, The Corridor housed a concentration of leading players and teams like no other region in the country.

From high schools Dunbar, DeMatha, and Bladensburg, to the University of Maryland (UMD) and Georgetown, to the NBA’s Baltimore/Washington Bullets, the area served up homegrown talent that won championships at all levels. Any roundball fan from The Corridor will claim it was just the natural order.

After all, the Bullets (forerunners of today’s Wizards) played in the championship series in 1971, 1975, 1978 and 1979. They posted their only national title ever in 1978, beating out the Seattle Supersonics 4-3 with Wes Unseld, a future Hall of Famer who started and ended his 13-year professional career with the Washington ball club.

The Bullets might have carried more trophies had they not overreacted to the 1975 loss against Golden State by trading away Kevin Porter, a promising point guard who earned the first of his 4 NBA assist titles with the Mid-Atlantic franchise.

In the early 1980s, Baltimore’s Dunbar High School produced the country’s most successful basketball team as immortalized in the book, "The Boys of Dunbar." Its top four stars- Muggsy Bogues, Reggie Williams, David Wingate, and Reggie Lewis- went on to play Division I before being drafted into the NBA. It was an unprecedented feeder rate from a single squad of a single high school.

Catholic schools that made an impact on the court included Cardinal Gibbons, Archbishop Spalding, DeMatha, Georgetown Prep, Gonzaga, Mt St Joe, and St Johns. Starting in grade school, the system worked to funnel young athletes all the way up to the pros. NBA luminaries such as Carmelo Anthony, Adrian Dantley and Rudy Gay were proven products.

The affluence of greater Washington, DC helped, since the Federal Government is the largest and most stable employer in the region. There was ample disposable income for sports camps, travel teams, and most importantly, scholarships. As a result, no public high school was able to compete and win in every sport against a private institution.

After the 1968 riots, Georgetown athletics reached out to DC by hiring John Thompson, an African-American high school coach from across town, who recruited minority students from surrounding communities. Other schools followed in an effort to bridge the socio-economic gaps that plagued many parts of Washington, DC and Baltimore.

When Georgetown won the NCAA championship in 1984, there were seven players who came up from The Corridor. Three were starters: Reggie Williams and David Wingate from Dunbar, and Michael Graham from Spingarn in Washington, DC.

The continuity was uncanny, since the North Carolina State squad that claimed the NCAA title the previous year featured three starters from Prince George’s County: Thurl Bailey from Bladensburg High at center, with Derrick Wittenberg and Sydney Lowe, both from DeMatha, as the backcourt.

The 1984 ACC championship held a similar story. The Duke team that was defeated by UMD in 1984 recruited both their guards from the DC area. UMD’s best performers, Len Bias and Adrian Branch, both hailed from local high schools and both became leading picks at the NBA draft.

Jumping off to the NBA.

Len Elmore, still UMD’s all-time leading rebounder, joined the Bullets as a first round pick in 1974. Kermit Washington from Coolidge High and American University, both located in DC, built a ten-year NBA career after being taken fifth in the first round by the Lakers in 1973. Marvin Webster from Edmonson High and Morgan College, both in Baltimore, was selected in the first round of 1975 by the Hawks.

The NBA feeder system kept going into the 1980s. Another rebounding dynamo from UMD, Buck Williams, went third in the 1981 draft and landed with the Nets. Thurl Bailey went seventh in 1983 with the Jazz. Patrick Ewing from Georgetown was number one in 1985 for the Knicks, as was David Robinson from Navy for the Spurs in 1987.

Two years later, 6'11 Danny Ferry from DeMatha by way of Duke was the second pick for the Clippers. Alonzo Mourning and Dikembe Mutombo, both Georgetown alums, were first round picks for the Hornets and Nuggets, respectively.

Coaches making it all happen.

Institutional greatness starts at the top and each program had a transformational coach. John Thompson turned around Georgetown, as did Lefty Driesell with UMD. Morgan Wooten created the legendary program at DeMatha, and the same was true for public school coaches Bob Wade at Dunbar and John Brady at Annapolis.

The coaching community and military bases that fed upward were also significant assets, since these programs exemplified discipline and performance. The youth associations from Crofton, Fort Meade, and Odenton fed into Arundel High, which was the best secondary school for sports during most of the 1970s.

Despite The Corridor’s pre-eminent status in basketball, the scourge of drugs that affected the whole country was never too far. Charles “Hawkeye” Whitney, graduating from DeMatha, was a top player at North Carolina State before being drafted in the first round by the Kansas City Kings in 1980. His professional career lasted just 3 years before devolving into a life of drugs and crime.

In college, the greatest tragedy to befall NCAA basketball was the death of Len Bias, a Maryland native who ruled the court at UMD and would have rivaled Michael Jordan in the NBA. Only two days after being selected by the Boston Celtics with the second overall pick in the 1986 draft, Bias died from a cocaine overdose.

Sending shock waves across the world of college sports, Bias’s untimely death led Congress to pass the Anti-Drug Abuse Act of 1986, also known as the “Len Bias Law”, as part of its nationwide initiative in the war on drugs.

While the Washington Wizards are hardly the storied team they were two generations ago with the likes of Wes Unseld, Elvin Hayes, and Earl Monroe, the area high schools continue to run the game successfully and colleges such as UMD, Georgetown and Virginia have established themselves as top-20 basketball programs.

Still, sports today are more advanced, more global, and more resource-rich than they were in the 1970s and 80s, and it’s difficult to imagine a small geographic strip once again dominating the game at all levels.

Jonathan Yates is host of "The Culture of Sport". He has written numerous articles in outlets such as Newsweek and Washington Post, and held interviews at NPR and CNBC.