Looking like a gangly mythical creature, Manute Bol was the tallest player to join the NBA. The 7-foot, 7-inch (2.31m) native of Sudan 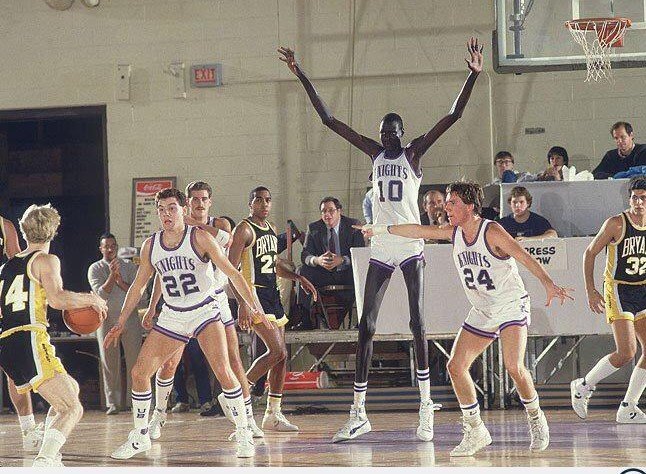 Looking like a gangly mythical creature, Manute Bol was the tallest player to join the NBA. The 7-foot, 7-inch (2.31m) native of Sudan is considered one of the best shot-blockers in the history of the game. But the amiable giant was also a committed humanitarian who risked his life and depleted his personal fortune to help refugees in a war-torn country.

Bol spent 10 years in the NBA (1985-’95) as a blocking specialist. With an 8’6” wingspan and a 10’5” vertical reach, the African marvel swatted balls like flies and denied shots from stars like Kareem Abdul-Jabbar, Julius Erving (Dr. J), and Larry Bird.

In his first year, Bol averaged 6 rebounds per game (rpg) and set a rookie record of 397 blocks (5 bpg). He snuffed an astounding 15 attempts in a single match against the Atlanta Hawks in January, 1986. Bol is the only NBA veteran to record more shots blocked than points scored.

Born into the Dinka tribe of southern Sudan, Bol’s genes carried the blueprints of some of the tallest people in the world. When he picked up a basketball for the first time as a teenager, he broke two front teeth on the rim coming down from a lay-up.

The family relied on herding cows for their livelihood, but young Manute left for Khartoum where luck and circumstance eventually landed him stateside.  An American coach saw him play in Sudan and in 1984, Bol found himself at the University of Bridgeport (UB), a Division II basketball program.

Popular on and off the court, the rail-thin exotic import turned heads everywhere he went and even drew fans from UB’s rivals. Game attendance tripled and the previously unheralded Purple Knights made the NCAA Northeast Finals.

When Bol announced his departure for the pros, UB’s coach was overcome by emotion and shed tears for the player who lit up campus for a single unforgettable season.

But there were questions whether Bol had the physical strength to do battle as a Center in the NBA. Weighing only 180 lbs. when he arrived to the U.S., Bol gained 20 lbs. at UB and was sent for additional strength training after being drafted by the Bullets.

He put in stints with the Washington Bullets, Golden State Warriors, Philadelphia 76ers, and Miami Heat. At one point, the Bullets paired him with 5’3” “Muggsy” Bogues, the shortest player in the NBA. The two ball handlers with a height differential greater than 2 feet made for a colorful show, but failed to win games.

Making money and enjoying the trappings of American culture, the “Dinka Dunker” had it made. But Bol’s heart longed for his family and the welfare of his country, now embroiled in a civil war. Reports began to surface of atrocities committed by the central government against his tribe and the people of southern Sudan.

On a visit back home in 1991, Bol took video footages of refugee camps and presented his findings to the State Department. He pleaded for intervention but the U.S. was too preoccupied with the aftermath of the first Gulf War.

Bol also warned government officials of Osama bin-Laden and the rise of Islamic extremism. It was in Sudan in the early 1990’s that bin-Laden and Al-Qaeda found sanctuary for their radical activities. But that chapter in America’s war on terror was still years away.

Sudan’s government later invited him to take part in peace negotiations and offered him a ministerial post. The offer was reneged after Bol, a devoted Christian, refused to convert to Islam. He was kept under house arrest for 3 years until 2002 and nearly died as his health deteriorated.

The long-limbed NBA veteran was left penniless after depleting his personal resources to help his country’s war victims. Back in the U.S., he turned to kitschy antics to continue his fundraising efforts and even did a celebrity boxing match with William Perry ("The Fridge”), a former 350 lb. fullback with the Chicago Bears.

Life turned for the worst in 2004 after a taxi he was riding in got into an accident, sending him to the hospital for 3 months. Bol’s former teammates raised $80,000 to cover his medical expenses.

The NBA’s first African player and a tireless advocate for human rights died on June 19, 2010 from kidney failure. Prominent sports figures and politicians attended his funeral service at the Washington National Cathedral where his body lay in a customized 8-foot coffin.

Manute Bol is buried in South Sudan, an independent country since 2011.