When 3 of America's most prominent black athletes endorsed Republicans 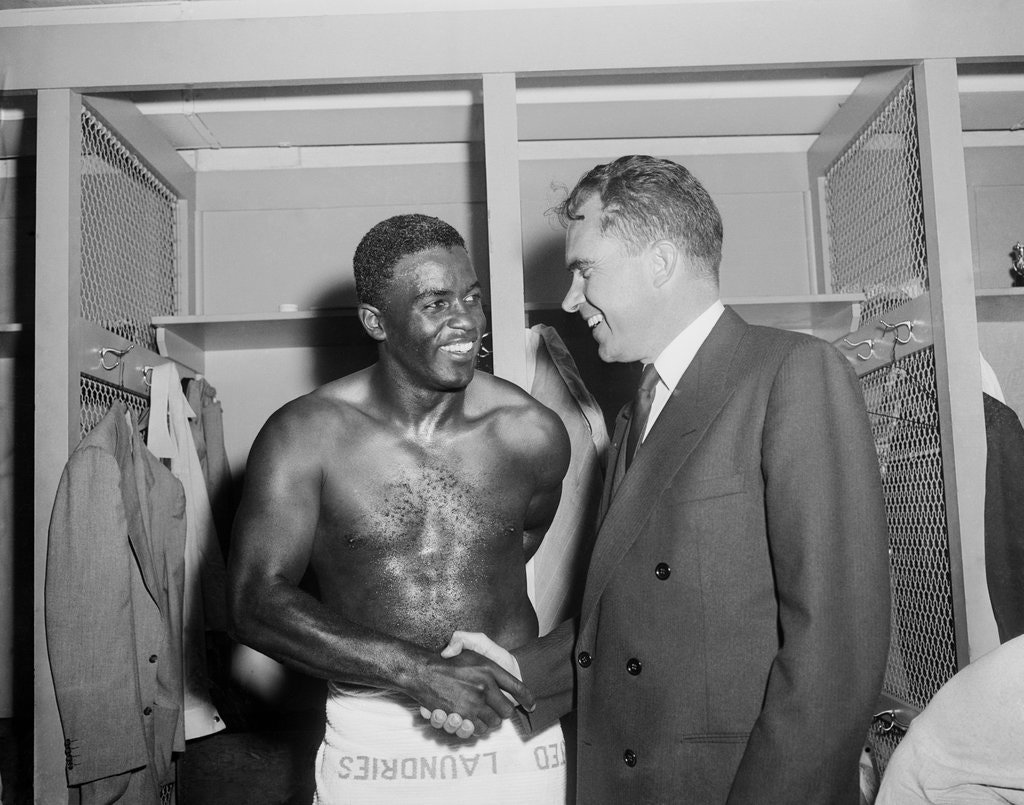 Jackie Robinson greeting California Senator and Vice-Presidential candidate Richard Nixon after winning Game 5 of the 1952 World Series. Robinson would endorse Nixon as the Republican candidate in the 1960 Presidential elections, but later abandon the party in favor of the Democrats.
Posted Saturday, February 26, 2022 8:00 am

Before the civil rights era of the 1960s, the Republican party of Abraham Lincoln still carried substantial weight with black voters. Three of the most prominent black athletes from the first half of the 20th century- Jesse Owens, Joe Louis, Jackie Robinson- even campaigned on behalf of Republican Presidential candidates.

Owens campaigned in 1936, Louis in 1940, and Robinson in 1960. They were tasked with galvanizing African-American support for a Republican White House, though on each occasion their political patrons failed to reach the Executive office.

In 1936, Jesse Owens emerged from the Berlin Olympics with 4 gold medals around his neck. As an African-American who was the most successful athlete of the games, he almost single-handedly dispelled Adolf Hitler’s myth of Aryan supremacy.

An overnight international sensation, the track & field legend returned home to a ticker-tape parade in New York City and was thronged by thousands of spectators who lined the streets of lower Manhattan.

Ben Chapman- The Most Bigoted Man in Baseball

But despite the roaring cheers and marching bands, Owens was still a black man living in a white, segregated America. The athlete hero who placed first at the 100m, 200m, 4x100m relay, and long jump events still had to ride the freight elevator at the Waldorf-Astoria Hotel to attend his own reception.

But what really seemed to trouble Owens was that Franklin Delano Roosevelt, the Democratic President at the time, never invited him to the White House, or even bothered to send him a congratulatory telegram.

When the incumbent party asked him to support them at the 1936 Presidential race, the renowned sports figure instead endorsed Alf Landon, the Republican nominee who was running against FDR.

On October 10, 1936, at a Republican rally held in Baltimore, the world’s fastest human took the stage alongside politicians railing against the New Deal, stating “…remember that the President did not send me a message of congratulations because people said, he was too busy…Governor Alfred M. Landon did send me a message and he was very nice to me.”

Landon ended up suffering a crushing defeat at the ballot, carrying only 2 states and gaining just 8 electoral votes against Roosevelt’s 523.

Owens needed money and he was paid to campaign for Landon. He had abandoned his amateur athletic career in the hopes of landing lucrative endorsements, but his dreams ran up against a harsh reality. There were few opportunities for black men, even famous ones.

For extra cash, he picked up odd entertainment jobs like challenging racehorses to a sprint. Explaining this decision, he said “…what was I supposed to do? I had four gold medals, but you can’t eat four gold medals”.

In the case of Joe Louis, the celebrated prize fighter who won the heavyweight title a year after Owens swept the Olympics, the motivation for endorsing a Republican candidate was more genuine and less financial.

At the 1940 elections, with FDR running for a third term in office, the fisticuffs champ lent his name behind the Republican nominee, Wendell Willkie.

Campaigning on the streets of Harlem and in the outer boroughs of New York City, the ringmaster repeated his talking points, “I am for Willkie because he stands for what is best for us colored people. Because this administration failed to pass the anti-lynching bill and because you all know that jobs are better than relief.”

A highly popular figure among both whites and blacks, Louis was also a focal point of anti-Nazi sentiment. Twice he boxed against Germany’s Max Schmeling in Yankee Stadium, losing the first bout in 1936 but then defeating him in 1938 to claim the world heavyweight title.

Before the attack on Pearl Harbor, the U.S. was still leaning towards an isolationist policy, but Willkie was advocating greater American involvement to support Britain’s war effort across the Atlantic.

Nevertheless, at the 1940 elections, FDR won an unprecedented third term in office, sweeping 38 of 48 states and carrying 449 electoral votes versus Willkie’s 82.

Louis fought his last match in 1951, losing to Rocky Marciano in an 8th round TKO at Madison Square Garden. Though still a beloved personality, he fell on hard times with unpaid tax bills and failed business ventures, and ended up relying on the charity of friends, including his old ring rival, Max Schmeling.

Around this time, another black celebrity athlete would come to endorse a Republican candidate.

In 1956, Jackie Robinson retired from the Brooklyn Dodgers with a legacy as the first black sportsman to join Major League Baseball. A 6-time All-Star, he played in 6 World Series and helped the Dodgers win the national championship in 1955.

Robinson was now looking to fill his retirement years. Though he staunchly supported measures to advance the social and economic status of black Americans, he also espoused conservative values.

In 1960, Democratic candidate John F. Kennedy was running against Richard Nixon, the Republican party’s choice to succeed the outgoing President, Dwight Eisenhauer.  Robinson decided to throw his lot with Nixon, believing that the Massachusetts Senator was weak on civil rights since he was courting southern Democrats, some of whom were segregationists.

Even though Kennedy helped release Martin Luther King from a Georgia jail when he was held on trumped-up charges, Nixon reminded the ex-ballplayer that it was just an opportunistic ‘grandstand play’.

Nevertheless, at election time, Robinson’s endorsement failed to carry the African-American block, since Nixon ended up with only a third of the black vote. In a close race, JFK went on to take the White House with 303 electoral delegates against Nixon’s 219.

When the civil rights era arrived in the 1960s, African-Americans started to swing permanently towards a Democratic base. Whereas 39% of blacks re-elected Republican President Dwight Eisenhauer in 1956, 94% backed the 1964 Democratic winner, Lyndon Johnson.

By then, Jackie Robinson had also distanced himself from Republicans after they nominated Barry Goldwater, an Arizona Senator who opposed the 1964 Civil Rights Act. At the 1968 elections, the former Dodger ditched Nixon in favor of the Democratic candidate, Hubert Humphrey.

While some black athletes like Joe Louis continued to endorse Republican office seekers, their mission became more difficult with time as the  political landscape continued to evolve.