The ‘Bird’ discusses his career, the people he has worked with, and the role of an announcer 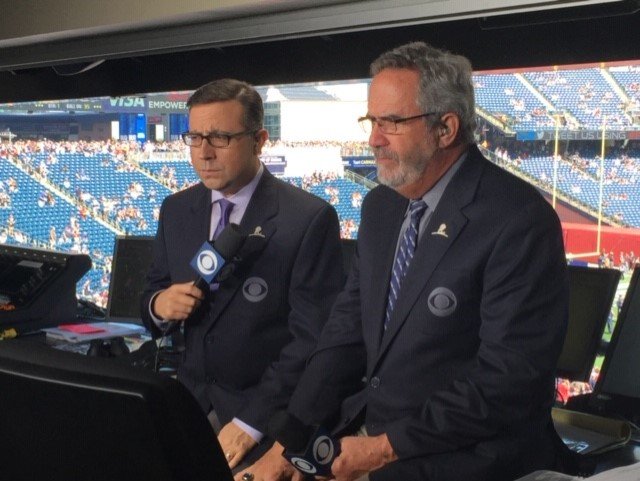 Ian Eagle (left) at the CBS broadcasting booth with Hall of Fame quarterback, Dan Fouts. Eagle has worked with dozens of renowned broadcasting partners over the course of his career, including 10 years with Fouts.
Posted Sunday, February 28, 2021 8:00 am

With over a quarter century of calling games on TV and radio, Ian Eagle is one of the most familiar figures in sports broadcasting today. His engaging play-by-play announcements and notable calls of dramatic moments on the football field and on the basketball court have earned him 4 New York Sports Emmy Awards. The ‘Bird’ has worked with dozens of renowned commentators over the course of his career, including 10 years with Hall of Fame quarterback Dan Fouts. Sports History Magazine spoke with Ian who agreed to share his story and  insights into sports broadcasting.

How did you first become interested in sports broadcasting?

I was 8 years old when my fascination with broadcasting began. I was watching and playing sports like any other normal kid, but I took particular interest in the announcers. I grew up in Forest Hills, NY and in the 1980's Marv Albert was broadcasting Knicks and Rangers game in addition to anchoring sports on WNBC-TV. He played a large role in my early dreams and most certainly in the style I initially developed. My parents were so encouraging when I shared with them my goal of being a sportscaster and told me 'then, that's what you'll do'. That is very empowering as a child when you believe something that most consider an 'out of the box' objective is actually attainable. They were also quite concerned when I was constantly doing a Marv Albert impression around the house even for non-sports related activities. Eventually, I stopped when they considered bringing in professional help.

Do you remember calling your first game on network TV?

My first network TV game was a college basketball broadcast for CBS on 2/7/98 (Vanderbilt @ Arkansas). All of CBS's staff announcers were at the Winter Olympics in Nagano and they needed a few fill-ins on play-by-play. It was All-Star weekend in the NBA, so I was available and flew down to Fayetteville to work alongside John Sundvold. It was a rather routine 10-point win for the Razorbacks but I made enough of an impression that CBS bosses asked me to broadcast the NCAA Tournament for them the following month. They eventually acquired the rights to the NFL and they signed me to work that package as well. I've been with them for the last 23 years and yet I can still smell the manure when I got off my prop plane in Arkansas on that Friday afternoon.

When did you pick up the nickname "Birdman"?

When I started doing talk shows on WFAN Radio in NY in 1992, the sports media critic from the Daily News Bob Raissman would refer to me as the 'Bird' in his column. Eventually when I was paired with Bill Raftery on Nets telecasts in 1995 he always called me 'Bird' on the air. So it's been either 'Bird' or 'Birdman' for nearly 30 years. Because my name is pronounced Eye-en, I think it's sometimes easier for people to just call me 'Bird'. The truth is I answer to a number of names.

What are some of your favorite sports moments that you called?

I've been fortunate to call a number of memorable sports moments over the last quarter of a century. I was the announcer for the World Feed (broadcast to English speaking countries across the globe) for the 1998 NBA Finals when Michael Jordan famously hit the game winner over Utah's Bryon Russell to give the Bulls their 6th NBA title. It was Jordan's last game as a Bull and the stunned silence in Salt Lake City is etched in my brain forever. I also was on the call for the 2010 NCAA Championship Game (once again the World Feed) when Duke held off Butler's last second push. If Gordon Heyward's half-court shot went down, I believe it would have been the greatest ending in NCAA Tournament history and the biggest upset. It was one of the most enjoyable games that I have ever called. I'm thoroughly enjoying calling Nets games right now with Kevin Durant, James Harden and Kyrie Irving playing a highly entertaining style of basketball. They've created a lot of buzz around the league and I'm excited to watch this journey unfold.

In your opinion, who were the greatest announcers of the 20th century?

I could reel off a list of announcers who changed the industry because there are plenty of them, but I'll stick with those who had a personal influence on me. I already mentioned Marv Albert, who in my opinion will go down as the greatest NBA announcer of all time. Bob Costas always brought an immense amount of talent and gravitas to every assignment he was given and to me, he's the preeminent host of his generation. Al Michaels has been the quintessential TV play by play announcer for 4 decades across a variety of sports. Dick Enberg exuded joy and a passion for whatever sport he was covering. Vin Scully, Chick Hearn, Mike Emrick all became synonymous with the sport they called. Another personal favorite is Vern Lundquist who always had a warmth and skill in connecting with the audience.

Fundamentally, what makes a great announcer?

I see myself as a storyteller. Every game that I broadcast has a story behind it and it's my job to help tell that story to viewers and listeners. The goal is to convey the drama of the event that I'm covering and humanize the athletes. My objective is to inform and entertain the audience and I bring that mentality to the microphone for every assignment I'm given. The methodology from broadcaster to broadcaster can vary, but ultimately you have to ask yourself during the game 'are you serving the viewer?'. Voice quality, vocabulary, instincts, a sense of humor, etc. all play a role in what makes a great announcer.

What would today's sports fans think of an old-school personality like Howard Cosell?

Howard brought a great deal of personality and opinions to the microphone in his day. That was a bit uncommon for on-air commentators at the time, but today it's a style that is employed on most networks. He would have still found his niche today because he knew how to stir the pot and always had a way with words. Twitter might have been a perfect platform for Cosell because he believed everybody wanted to hear his hot-takes at any hour of the day. The truth is he was an extremely gifted communicator and whip-smart and there's little doubt that he would be among the top commentators in the industry if he was a part of today's sports landscape.

What are the things that can go wrong when one is calling a game?

The key word is command. If you are not in command of the broadcast as a play-by-play announcer, it can easily go sideways. Accuracy is the first step; you are reporting what you see so it's imperative that you are precise in your commentary. In many ways you are acting as a traffic cop between what's happening in front of you and what's happening around you. The Producer and Director are shaping the look of the broadcast, graphics are appearing on the screen, replays are being shown, cutaways are used- if you can't process information quickly and speak extemporaneously, you're going to have problems doing this job. Working on a TV broadcast is a collaborative experience, so there is a lot of trust put in everyone on the crew to carry out their roles to the best of their abilities to avoid a domino effect of errors. Broadcasting the wrong information is when you lose credibility and fail your audience.

Who did you enjoy working with most in the broadcasting booth?

I've worked with 139 different partners over the course of my career and I take pride in trying to create chemistry with whomever I'm sitting next to. A number of those relationships turned into close friendships and usually fans can pick up on that during a broadcast. Bill Raftery was my first partner on Nets television and he's remained a very close friend for the last 27 years. He and I have always had an easy 'give and take' on and off the air and laughter is a consistent part of the dynamic. I worked in the booth with Hall of Famer Dan Fouts for 10 years and we really enjoyed one another's company, he's a terrific guy and was a fantastic partner. Former Duke All-American Jim Spanarkel and I have been paired together on hundreds of basketball broadcasts and we could finish each other's sentences like an old married couple. My current NFL on CBS partner is Charles Davis and he's a joy to work with, an exceptional team player. Honestly, I haven't had many bad experiences working with analysts and I look back on all of these partnerships with positive memories.

How has sports broadcasting changed since you started your career?

Information is so readily available today compared to when I started. When I started doing play by play in 1994, the resources were limited. Now you could sit for countless hours on the internet doing research and accumulating notes for the broadcast. When I'm juggling NFL, NBA and college basketball assignments preparing for events can be challenging. I still do all of my work by hand (that's how I best learn the information that I require) and it can be a laborious process. I think because all of that information is readily available, sports fans are more informed than ever before and as an announcer you have to go the extra mile to find something that is fresh and compelling. When I started, the most basic information (where a player attended college or hometown) seemed newsworthy for the viewer. Now it's a simple Google search for any fan, so announcers just can't scratch the surface anymore.

How do you see the profession evolving in the future?

I think there will always be a need for intelligent, cogent commentary but we may see the fans getting more options on big events. We've seen ESPN and Turner offering multiple channels on college football and basketball title games and it wouldn't surprise me to see more of that as we move into the future. There are different needs for different demographics and I could see networks catering more to that philosophy in the coming years. Nickelodeon produced its first NFL playoff broadcast in January (my son Noah was the play-by-play announcer for that game) and it was a big hit; there will be more resources put into tailoring coverage to specific audiences as long as it can be monetized.

What advice would you give to students who aspire to enter sports broadcasting?

You have to go out and do it. The only way to improve on-air is to be on-air in some capacity. Practicing in front of mirror can help, talking into your iPhone is an option, but ultimately you have to feel the pressure of doing it at a moment's notice. You also have to study how others do it. Watching games and studio shows and observing how professionals handle themselves can plant seeds in your head on how you would approach similar circumstances. I've been in this business professionally since 1990 but I'm always trying to figure out ways to improve and streamline my process. You're a student for life in this job and you have to truly immerse yourself in it in order to have an understanding of what it requires to be successful.