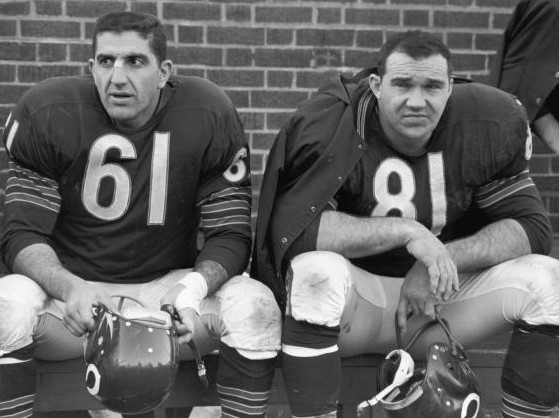 With pre-season football upon us, I yearn for the days, now buried deep in the scrapbook, when the beloved old man George Halas and the Bears would camp out at tiny Rensselaer College where Papa Bear and his kids would prepare for another year of regular season football.

No, there was no air conditioning. Players brought fans and hoped for the best. The conditions were tough and outright spartan. Today, any con housed at legendary Cook County Jail in Chicago would have filed suit charging inhumane treatment.

Oh, the memories I have packed away. A rogue defensive end Doug Atkins has to top the list. One year, it might have been '64 or '65, the future Hall of Famer and his squad were running the traditional Halas Mile. The Halas romp was actually a bit of a joke, since guys had to finish in only 10 minutes.

Anyway, Atkins just loved to drive Halas nuts. He'd frequently call the old man's apartment off fashionable Lake Shore Drive to complain about the offense. As a personal note, I've attended 67 consecutive Chicago Bears home openers and have determined that complaining about the Bears offense is as much a part of my windy city as a cooked alderman.

I can still see Doug loafing as he completed lap one while Halas barked at him to pick up the pace. Atkins didn't exactly turn on the jets on lap two. By the midway point of lap three, Halas was screaming at Atkins in three different languages. So, what does Doug do? He begins to jog to the locker room.

A furious Halas screamed, "Where the hell are you going ya big SOB?" Atkins never broke stride as he yelled back at the old man, "Go bleep yourself. I'm a football player not a track man!" There wasn't much George could say. Atkins was the most ferocious player on his roster.

A few years later, in 1969, I flew to Washington D.C. to see the Bears play their pre-season opener against the Redskins. The game had two engaging story lines. It was Vince Lombardi's first game as coach of the 'Skins’ and Gale Sayers, the greatest open field runner in NFL history, was making his first appearance since suffering a brutal knee injury the previous year.

I was 20 at the time and just in awe when WGN Sports Editor Jack Rosenberg asked me to spot the game for Bears announcers Lloyd Petit and Irv Kupcinet.

The weatherman didn’t do either club any favors. About an hour before game time, a driving rain storm turned RFK Stadium into Lake Erie. The muddy field convinced me Sayers wouldn't play. I was off base as Gale returned the opening kickoff about 70 yards.

This was round one of a five game exhibition slate, so why risk Gale? It was simply a different era. If Sayers were playing today and was on the field to return the opening kick, the G.M. would fire the coach before the kicker reached the tee.

More recently, Mitch Trubisky, the Bears sophomore quarterback, played 34 snaps during the warm up games. 34 snaps? Halas would have milked Trubisky. Even Mike Ditka would have had him take 40 to 50 more snaps.

Pre-season football games have become stoop tag tournaments. Players are treated like dandelions and as a result, athletes are still employing muscle memory when they block and tackle the first two weeks.

Gang, my take as an old-timer who’s seen it all? The league actually plays 14 instead of 16 games a season that qualify as "real".

Chet Coppock is frequently billed as “The Godfather Of Sports Talk Radio” and is a member of the Chicago Sports Hall of Fame.  Chet is the author and co-author of several books available for sale on our site.  His latest book ‘Your Dime, My Dance Floor: Chet Coppock In Pursuit of Chet Coppock’ can be obtained at Eckhartzpress.com or by emailing Chet at chet430@aol.com   His social media sites are www.chetcoppock.com and  www.dailycoppock.com

Other articles enjoyed:  When Rugby Lost Out to Football, The First Super Bowl: Less Than Super, 70 Years of NFL Relocations, Peyton Manning: The Man Who Changed Indiana