A decade before they were reincarnated into the Wizards, the Washington Bullets drafted the two tallest and shortest players in NBA history and paired them for a season- other than providing for a colorful sideshow, the synergies failed to raise the team's octane. 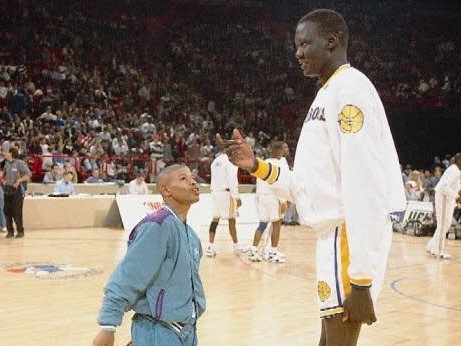 A decade before they were reincarnated into the Wizards, the Washington Bullets drafted the two tallest and shortest players in NBA history and paired them for a season.

Other than providing for a colorful sideshow, the synergies failed to raise the team's octane.

The 1970’s were the Bullets’ golden era- six division accolades, four conference titles, and the franchise’s first and only championship trophy in 1978.

But a few years after reaching glory, the team settled into a slump.  Searching for talent, the Bullets took a chance at the 1985 draft by picking up Manute Bol, a 7’7” (2.31 m) Sudanese native, the first African to join the NBA and the tallest ever at the time.

Standing like a gangly mythical figure, Bol was a blocking specialist with an 8’6” wingspan and a 10’5” vertical reach, higher than the basket hoop.

In his first season with Washington, Bol averaged six rebounds per game (rpg) and set a rookie record of 397 blocks (avg. 5 bpg). He snuffed an astounding 15 attempts in a single match against Atlanta.

At retirement, Bol would  be the only NBA veteran who blocked more shots than he scored.

Two years later, the Bullets gambled with another draft, 5’3” (1.60 m) point guard Tyrone “Muggsy” Bogues, the shortest player to ever land on an NBA roster.

His stature resembling a jockey more than a basketball athlete, Bogues was a speed artist who made his way through the world of giants by exceling in steals and assists. He was ACC career leader in those categories and a member of the U.S. team when they won gold at the 1986 FIBA World Championship.

For a single season in 1987/88, the unlikely yin-yang duo with the greatest teammate height difference in the annals of professional basketball, hit the court for curious possibilities.

Bol averaged 2.7 bpg and 3.6 rpg; Bogues came in at 5.1 assists and 1.6 steals per game.  Not withstanding Bogues’ first  year of playing, the  overall team performance was underwhelming. The Bullets ended up posting a 38-44 losing season and were knocked out in the first round of the playoffs.

Though the pair couldn’t produce championship fuel, gate receipts were reported to increase when Washington was on the road. Seeing shots swatted like flies and balls swiped like candy from the best on the court was an unprecedented fan experience.

At season's end, Bol and Bogues departed for other teams but not without  leaving behind  memories of their  unique vertical combination.