Slacking off in college, losing his job, and hitting rock bottom before climbing to stardom 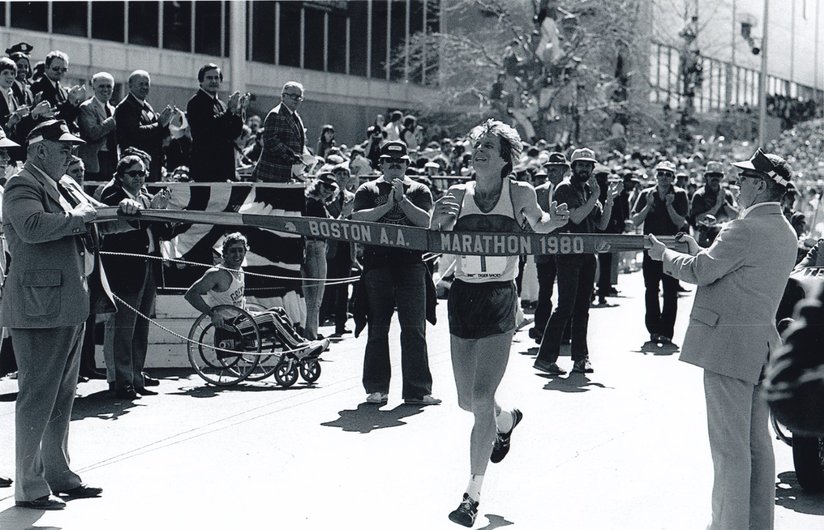 Bill Rodgers clears the finish line at the 1980 Boston Marathon. It was his 4th and last championship at the world's oldest marathon event. He also won the New York title 4 consecutive years between 1976-1980.
Posted Sunday, March 14, 2021 8:01 am

“I always needed someone to pull me along”, says Bill Rodgers about his early years. The veteran long-distance runner, who still holds the record for most victories at the New York and Boston Marathon races, was hardly the model of a champion athlete.

But his story growing up reflected the culture of the time as much as his own personal journey.

At 73, Rodgers is still running. He’s down to ½ marathons at this stage of his life, but the veteran street racer did more than his share of the 26.2-mile chase. By the time he turned 40, he ran 50 marathons around the world with noteworthy finishes.

To this day, Rodgers remains the only marathoner who has held simultaneous titles of three majors (1977)- Boston, New York, Fukuoka. After a decade of either not participating, or not finishing, he ran his final challenge at the 2009 Boston Marathon, completing the course in 4:06:49.

More symbolic than anything, the native New Englander managed to finish because he ran with a supportive group of friends. Friends is how Rodgers discovered the sport and found inspiration.

Born outside Hartford, Connecticut, he started running with his older brother, Charlie, and best friend, Jason. In high school, he joined the track & field team his sophomore year when the program was added to the sports curriculum.

“We ran on a grass field and just had fun”, recalls Rodgers with a wisp of nostalgia.

In contrast to today’s competitive high school landscape, Rodgers’ running world was an innocent frolic. “We didn’t run more than 3 miles and the coach didn’t want us to get hurt”, he remembers.

Still, the young man’s talents shined and in his senior year he placed 1st in the Connecticut State cross country competition and 6th at the New England Cross Country Championships.

At Wesleyan where he attended college, Rodgers teamed up with older classmates Amby Burfoot and Jeff Gallaway. Burfoot, who was also his roommate, won the 1968 Boston Marathon while still a senior in college.

In later life, he became editor-in-chief at Runner’s World magazine. Gallaway, an All-American at the time, went on to compete at the 1972 Olympics.

On campus, Rodgers smoked, studied sociology, and got involved with the Anti-Vietnam war movement. His diverse interests at a Division III liberal arts college were hardly the formula for developing a gifted athlete.

But Rodgers was anchored by the support structure he found with his coach and older teammates. “They taught me how to pace myself and build up”.

It was after college that Rodger came unraveled. The support, the motivation, and the team-focused drive was gone. Running at the time was not a lifetime activity, so he stopped his pounding routines and like most college graduates, took up life.

He did his selective service as an orderly at a Boston hospital, transporting patients in wheelchairs and stretchers.

It wasn’t long before the Wesleyan graduate began to slide and hit rock bottom. He was fired from his low-wage job, had his motorcycle stolen, and found himself broke and directionless.

Living in Boston, one day he saw his old college running buddies, Amby and Jeff, participate in the marathon. Watching Gallaway finish in the top 10 reignited his passion for the grueling road discipline. He joined the YMCA and started training again.

Rodgers is fond of saying that “when you run you change your life”. He raced his first Boston Marathon in 1973 but dropped out at Heartbreak Hill after failing to pace himself accordingly. It was a warm Spring day and he walked back home despondently. Rodgers would later discover that he excelled in cold weather marathons.

In 1974, he came in 14th, and in 1975 he swept the Boylston Street finish line, clocking 2:09:55, a new American record. That year, he fared poorly in New York but when the Big Apple race was moved from early September to the end of October for cooler temperatures, he won.

Trailing him in 2nd place at the 1976 New York Marathon was Frank Shorter, the man credited with triggering the running boom in America.

Shorter won gold in the marathon event at the 1972 Olympics, the first time since 1904 that an American claimed the top accolade. Shorter became an inspiration to millions of people, including Rodgers himself who was now competing neck-and-neck with the country’s most celebrated long-distance runner.

Rodgers made the 1976 Olympics team but placed 40th at the  race in Montreal due to a foot injury. Meanwhile, Shorter picked up the silver medal.

“Running lifts all boats”, Rodgers claims. His life was once again purposeful with a teaching job and a Master’s degree in Special Education on the way from Boston College.

Running kept him busy with invitations to compete around the world. While his travel and lodging expenses were paid, it was logistically difficult to fly overseas for a weekend race and be back in the classroom by Monday morning.

Endorsements also came in as he was winning more marathons. After his inaugural triumph in Boston, he was offered $3,000 by ASICS to wear their brand, an amount that increased to $13,000 the next year, and $40,000 the 3rd year.

But it was still difficult to make a steady living in the sport and by the end of the decade, Rodgers and his brother opened a running store, which they would manage successfully for the next 35 years.

All hopes for competing at the 1980 Olympics were dashed when the U.S. moved to boycott the games. Rodgers became one of 40 renowned athletes who pressed for change on behalf of runners that found themselves at the mercy of a quadrennial event, especially with no financial rewards.

Nike sponsored the first race with a $10,000 prize. Within a few years, New York and Boston were offering marathon purses.

Rodgers attributes his athletic success to a concept he calls “running within yourself”, a form of mental and physical self-awareness. He stresses that the marathon is not an easy undertaking, since “it takes 2 to 3 years to get into it”. He also views long-distance running as a unique sport, as it offers both competition and support from the same people.

Residing today west of Boston in the town of Boxborough, Rodgers still travels to local and regional marathons and stays in touch with old colleagues. He wasn’t present at the 2013 terrorist bombing and found out about the attack when one of the officials called him home.