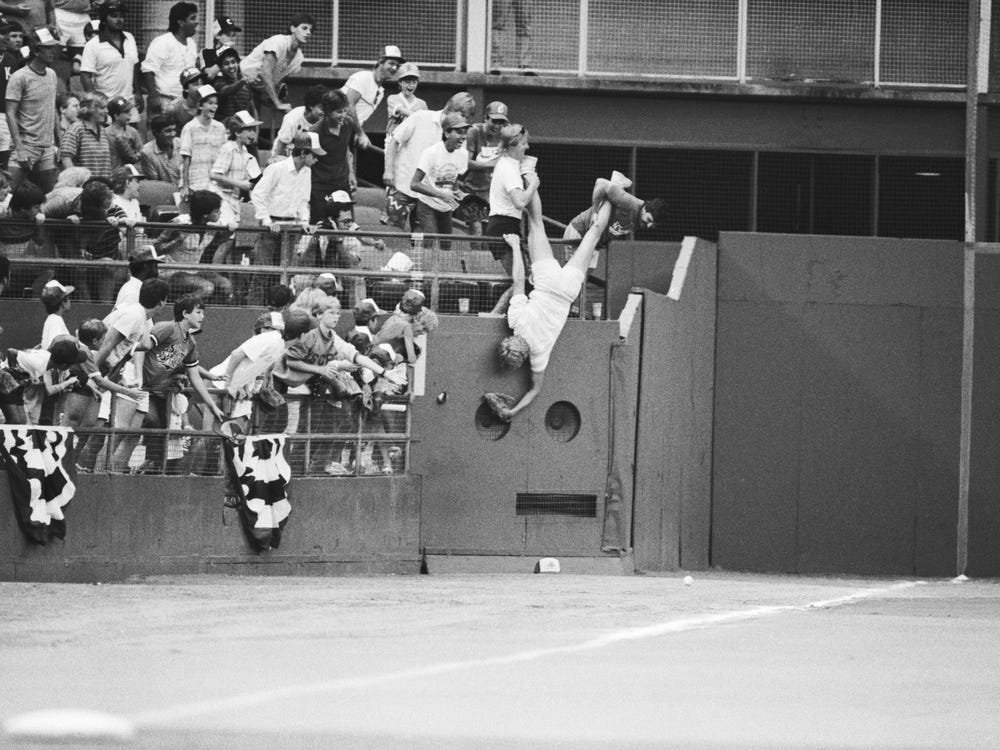 A fan is lowered upside down by his friends to retrieve a ball. Until "Reuben's Rule" was born, spectators risked being arrested for keeping a foul ball.
Posted Sunday, September 6, 2020 8:00 am

In 1998, the Philadelphia Phillies named 87-year old Robert Cotter “Fan of the Century” and presented him with an autographed baseball of the entire team.

It wasn’t that Cotter stood out as the club’s most passionate fan, but the Phillies were making amends for an incident that took place more than 75 years earlier when Cotter was just 11 years old.

On a summer day in July, 1922 the youngster was enjoying a Phillies game at the National League Park in Philadelphia when he caught a foul ball that sailed his way. Cotter pocketed the souvenir and refused to return it as was dutifully required at the time. As a result, the little tyke was hauled to the police station where he ended up spending a night in jail.

There was a time when baseballs were relatively costly and team owners were too miserly to give them away. Most spectators in the early part of the 20th century accepted that reality and when they got hold of balls in the stands they threw them back just as basketballs today are returned to the court when they land in the chairs.

But as the game evolved and stadiums increased in size to accommodate larger crowds, fans became less compliant with the ballpark norm. The romance of catching a foul ball and keeping it became part of the thrill at a baseball game, especially a ball that was struck by a renowned slugger.

In 1904, a rule change in baseball allowed teams to post security employees in the stands to retrieve foul balls that ended up in the bleachers.

Sending the hapless guards to reclaim the errant projectiles angered fans, but most franchise owners supported the measure as a way to protect their property. The only executive who spoke out against the practice was Chicago Cubs owner, Charles Wheeghman, who saw it simply as poor public relations.

In 1916, he publicly announced that Cubs fans were allowed to keep foul balls and admonished the other team owners by saying “it isn’t always good business to be pennywise.”

Fans and owners kept tugging back and forth on the issue. They came to a truce during WWI when they agreed that all foul balls were to be donated to servicemen who needed them for on-base recreation.

But after the war ended, the dispute resurfaced. With a mischievous innocence reminiscent of the “Little Rascals” television gang, Robert Cotter used to climb up a drain pipe and sneak under a gate at the National League Park to watch his home-team play.

On the day he caught the foul ball and tried to escape with it, Phillies owner William Baker and business manager William Shettsline decided to make an example of the little boy and charge him with larceny.

By the time Cotter’s mother arrived to the precinct to bail out her son, the courthouse was closed and the ragamuffin was placed in detention for the night.

However, on his arraignment the following day it wasn’t America’s juveniles who got the judicial whipping, but the team brass. Lambasting the Phillies owners and managers, Judge Charles Brown ruled in favor of Cotter, stating “Such an act on the part of a boy is merely proof that he is following his most natural impulses. It is a thing I would do myself.”

The story made the local press and even reached papers as far as Boston. Realizing the public relations nightmare that was unfolding in front of their eyes, it didn’t take long for the Phillies to change their foul ball policy and for other teams to follow.

While Robert Cotter’s account followed the tale of a baseball-loving kid, a year earlier it was an adult fan who poked a legal hole into the game’s contentious debate around foul balls.

In May, 1921, 31-year old Giants fan Reuben Berman was sitting in the box seats at the Polo Grounds in New York when he caught a ball that came his way. Instead of turning it over as demanded by an usher, he tossed it several rows back to another group of spectators.

Berman was subsequently removed from his seat, taken to the Giants office, chastised and threatened with arrest. He ended up being ejected from the stadium and put out on the street with his ticket refunded.

Team Secretary Fred Knowles then made it clear to reporters: “In the future I will not be so lenient and any person caught trying to steal a ball will be arrested and the complaint pushed”.

But it wasn’t the last the Giants heard from Berman. At the end of the summer, the stockbroker from Hartford, Connecticut came back with a $20,000 lawsuit, alleging humiliation, loss of reputation, and mental and bodily duress.

It took over a year for the Giants to respond to the filing but when they finally retorted with an explanation, the franchise argued that if Berman suffered any damages then it was due to his own personal misconduct. The case was tried and the plaintiff ended up collecting $100.

Soon after, the Giants changed their ballpark policy and  “Reuben’s Rule” that allows fans to keep foul balls after catching them was born.

Whether they know it or not, for the last 100 years in American baseball, every kid who showed up to the ball park with a glove and every adult who stretched out his arms to try and catch a flyball gift, owes a gratitude to Robert Cotter and Reuben Berman.

For team owners, it was a lesson learned generations ago that fans are customers who need to be indulged with sensible public relations practices.