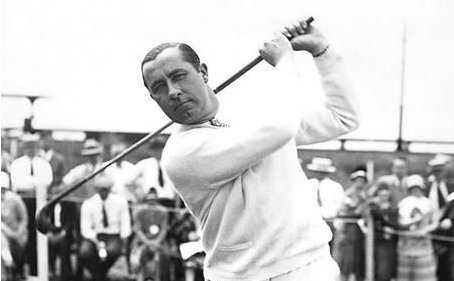 The retail tycoon proposed to establish an association of professional golfers and an annual tournament, setting the foundation for one of the world’s largest sports organizations and its premier event, the Professional Golf Association (PGA) Championship.

The business magnate imported golf equipment from Great Britain and sold them in his stores to the public and wholesale to the pros. His company was also locked in a retail battle with A.G. Spalding & Bros. for the sale of golf balls.

Inheriting his father’s acumen for marketing and merchandising, Lewis Rodman banked on the idea that an association of professional golfers would draw more recreational players to the game and hence, increase traffic at his stores.

Amateur championships had already been in play in the U.S. for over twenty years. Rhode Island’s Newport Country Club and New York’s St. Andrews Golf Club hosted the two most prestigious events.

But the pros, who at the time were held in low esteem by wealthy and privileged amateurs, weren’t organized and didn’t have their own national tournament. Wanamaker put up $2,580 in prize money and a silver trophy to get the inaugural competition teed-off.

The first PGA Championship took place on October 16, 1916 at the Siwanoy Country Club in Bronxville, N.Y. Jim Barnes emerged victorious in a field of 32 competitors, winning $500 in cash, a diamond studded gold medal, and the Wanamaker Trophy. More than a century on, the field would grow to 156 pros dueling for a $10.5 million purse.

Colorful, dashing, and exceptionally skilled at the game, Walter Hagen was the world’s first full-time tournament professional and arguably the first millionaire sportsman.

Born to a working-class family in upstate New York, Hagen was unabashed about his run-ins with elite private clubs. At the 1920 British Open, the American hired a chauffeured car, parked it in the driveway, and used it as his private dressing room and eating space since he was denied entry into the clubhouse.

Golf legend Arnold Palmer, himself of humble beginnings, remarked at a dinner once in honor of Hagen, “If not for you, Walter, this dinner tonight would be downstairs in the pro-shop, not in the ballroom”.

An admirer and competitor of Hagen, Gene Sarazen hailed from a family of poor Sicilian immigrants and would claim 7 majors, including 3 PGA’s. He worked the bags at the age of 10, becoming a self-taught pro and later on invented the modern sand wedge.

Commenting on Hagen, Sarazen said, “All the professionals…should say a silent thanks to Walter Hagen each time they stretch a check between their fingers…It was Hagen who made professional golf what it is.”

If Hagen and Sarazen dominated professional golf in the 1920’s, then Bobby Jones kept the flame lit for amateurs. A gifted athlete who co-founded the Masters, Jones won the U.S. Open 4 times, the British Open 3 times, but never played the PGA since he earned a living outside the sport.

By tradition, the PGA is still closed to amateur players and the Masters still reserves slots for non-pro champions. Both are a sign that golf has democratized from the early days, but has also kept its history.

Other articles Enjoyed:  The Caddy: From Handler to Hall of Famer, The Great Golf Marathon, Meltdowns At The Masters