The Spitball ban goes into effect, but 17 pitchers are still grandfathered 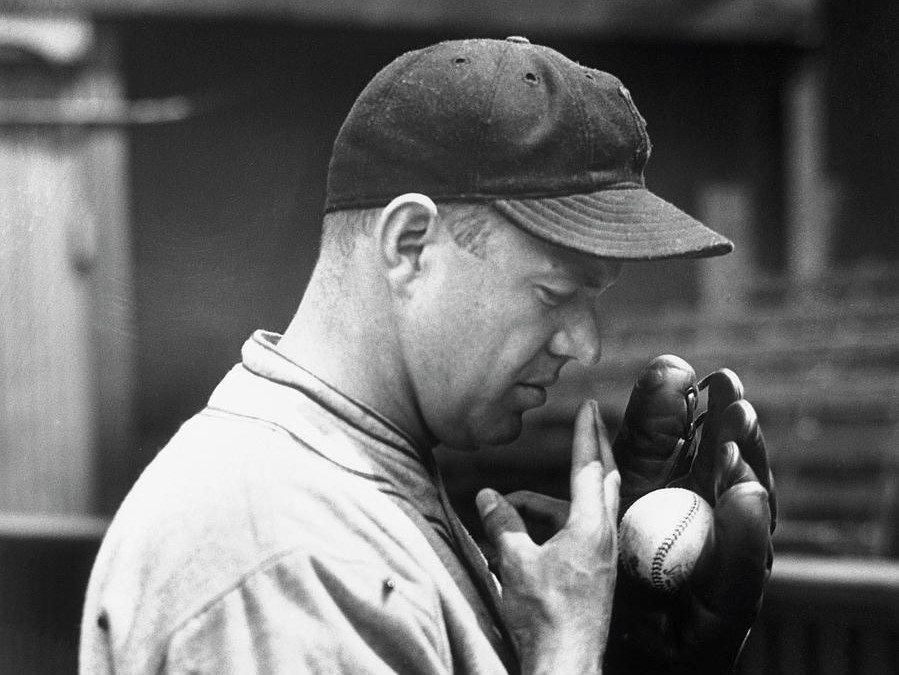 Burleigh Grimes wetting his fingers before launching a spitball pitch. 17 pitchers were grandfathered after the ban and Grimes was the last to hurl a legal spitball when he retired in 1934.
Posted Sunday, September 22, 2019 8:00 am

A little over one hundred years ago, Major League Baseball took steps to outlaw the controversial spitball. Some pitchers and owners thought they couldn’t win games without it, while others welcomed the decision as a way to sanitize the game and boost home runs in the Deadball Era.

The final resolution was a happy medium that banned the use of artificial substances to alter the flight of a ball, but still allowed a select number of veteran pitchers to continue throwing the spitball until their retirement.

On February 9, 1920, a group of major league baseball executives who made up the rules committee came together to ban not just the spitball, but any delivery off the mound in which the surface of the ball was changed.

Used by some hurlers in the 19th century, the spitball, as its name suggests, was a pitch in which a portion of the ball was dampened with saliva, gel, mud, or even scuffed, to change its behavior in the air. The spitball thrived after 1900 and was partly responsible for the low scoring games that were associated with the ‘Deadball Era’.

Thrown in the same motion as a fastball, the doctored projectile created an inequality of air friction, which if launched correctly, sunk the ball at the plate. The result was that batters topped the ball on the swing, generating more grounders than flyballs and leading to fewer home runs and lower game scores.

Pitchers developed their spitball techniques because it won matches. The only two American League hurlers to win 40 games in a single season were both spitballers: Jack Chesbro of the New York Highlanders (1904) and Ed Walsh of the Chicago White Sox (1908).

Stickball, Death of a Street Culture

But for baseball team owners, gate receipts at the ballpark was the main goal. They were looking for more excitement on the field to draw in the crowds. There were other reasons cited to discontinue the spitball: it was unsanitary, hard to control, difficult to field, stressful on a pitcher’s arm, and even too dangerous.

But these points were either minor, or simply rejected. The main argument for eliminating the freak deliveries was to inject more dynamism into a hit-and-run sport that was dominated by small ball tactics.

One of the events that was falsely attributed to the end of the spitball era was the death of Cleveland Indians’ shortstop, Ray Chapman.

The only baseball player in history to be killed while on the field, Chapman was beaned at the plate on August 16, 1920 in a game against the New York Yankees. Hit in the head by a pitch from Carl Mays, he was rushed to the hospital where he died hours later.

The official ban of the spitball had already been in place for six months and Chapman was most likely struck by a fastball. Witnesses described that he didn’t move to avoid the missile, which means that he probably couldn’t see the ball in the twilight of the late afternoon. A spitball would have also dropped to his shins or calves.

Nevertheless, the tragedy did lead MLB to establish a rule requiring umpires to replace dirty balls. The batting helmet wouldn’t be made a requirement until the late 1950s.

It was Babe Ruth and his 29 electrifying home runs in 1919 that enthralled fans and helped lead team owners to implement rule changes to increase game scores and out-of-the-park launches.

Another idea that was floated at the time but wasn’t adopted was punishing the intentional walk by advancing players that were already on-base. Team owners knew that fans hated the intentional walk, especially when players like Ruth were at the plate.

The decision to outlaw the spitball was led by Charles Griffith, owner and Manager of the Washington Nationals. Other members of the committee that supported the decision were Bill Veeck of the Chicago Cubs, Barney Dreyfus of the Pittsburgh Pirates, and Connie Mack of the Philadelphia Athletics.

Professional baseball then had 8 teams in each league and it was decided that the 1920 season would be the last year in which spitballers were permitted to hurl their crafty weapon.

The American League allowed each of its clubs to utilize just 2 designated spitball pitchers; the National League rejected the limit and kept it open for the 1920 season.

But some pitchers and managers were concerned about the new regulation that came down fast and hard and without a sunset clause.

Spitballer Burleigh Grimes of the Brooklyn Robins rightfully argued that he spent over a decade perfecting his wet throw and had little else in his pitching arsenal. Others contended that it would be difficult, if not impossible, for veteran spitballers to switch to the curveball since it uses different muscle motions they never developed.

Managers were equally worried about replacing talent that would suddenly be lost. Stan Coveleski, star pitcher of the Cleveland Indians squad that won the World Series in 1920, was a career spitballer who would have seen his future ruined.

In the Fall of 1920, six teams in the National League voted to recommend that certain pitchers be allowed to use the spitball for the remainder of their careers. The American League agreed to the proposal and the new rule went into effect in the Spring of 1921.

A total of seventeen pitchers were selected for exemption and grandfathered for the rest of their playing days, 8 from the NL and 9 from the AL.

Burleigh Grimes was the last of the career wet hurlers, throwing MLB’s last legal spitball in 1934 with the St. Louis Cardinals. Grimes’ retirement was preceded by that of Jack Quinn (1933) and Red Faber (1933). All three spitballers were World Series champs.

Since its ban almost a century ago, there have been isolated initiatives to reinstate the spitball when cheatings on the mound were discovered, or when the game’s offense was believed to have exploded in hits and home runs.

However, those proposals were always voted down by wide margins and the spitball remains a relic of baseball’s rich history.