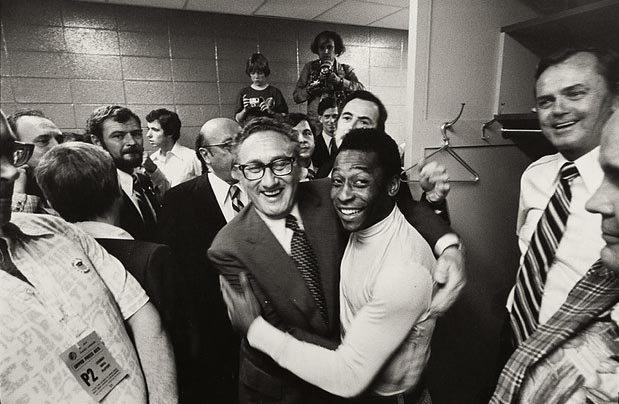 Legendary soccer star Pele and Secretary of State Henry Kissinger shown embracing at Giants Stadium in 1977. With glitz and politics, soccer landed in America in the mid-1970s, helping to plant the seeds for the future of the sport in the U.S.
Posted Sunday, September 20, 2020 8:00 am

In the early 1970s, the New York Cosmos were an unremarkable, semi-professional soccer club playing a game that most Americans never cared for. Within a few years, the team became the hottest ticket in town and soccer was no longer just a foreign sport.

The catalyst was the arrival of the world’s greatest soccer player to the United States, the last outpost for the globe’s most popular game. Sponsoring it all was Warner Communications, a media company headed by the visionary businessman, Steve Ross.

Before there was a Ted Turner, or a Rupert Murdoch, there was Steve Ross. A free-wheeling, lavish-spending media executive, Ross became enamored with soccer after being introduced to the game by 2 foreign-born executives.

The debonair native New Yorker had a history of cobbling together disparate businesses that ranged from funeral homes, to parking garages, to a flooring company. By 1971, he was at the helm of Warner Communications, a conglomerate that owned a film studio, 6 record labels, and a number of cable TV properties.

Ross was one of 8 individual investors who put up $35,000 each to launch the New York Cosmos, a soccer franchise that would play in the recently-created North American Soccer League (NASL).

The 1966 World Cup in England was the first of the quadrennial soccer tournaments to be broadcast live around the world and investors from this side of the Atlantic started to wonder why the game was still absent from the American landscape.

After Turkish-born brothers Ahmet and Nesuhi Ertugen sold their record label to Warner, they stayed on as executives and succeeded in pitching the idea of a professional soccer team to the big boss.

St. Louis University- A City, A College & A Soccer Dynasty

Inspired by the nameplates of MLB’s Mets and the NBA’s Knicks, whose appellations derived respectively from ‘Metropolitan’ and ‘Knickerbockers’, the New York soccer visionaries came up with the ‘Cosmos’, curated from ‘Cosmopolitan’.

The team started playing in 1971 at Yankee Stadium before moving to Hofstra Stadium in Long Island and then to Downing Stadium on Randall’s Island in the East River. A motley crew of foreigners, students and half-amateurs, the Cosmos made the playoffs in the first 3 years of their existence and even won the league championship in 1972.

But the game itself failed to catch on with Americans who were firmly locked in with the country’s traditional sports of baseball, football and basketball. NASL had no TV contracts and games were poorly attended.

Ross and his management knew they needed international stars on their roster to draw gate receipts and build a television audience. That opportunity came after 1974 when the world’s most famous soccer player became a free agent.

On June 10, 1975, the Cosmos held a press conference at Manhattan’s prestigious ‘21 Club’. Previously, the team never drew more than a few local reporters, but this time hundreds of national and international journalists packed the famed restaurant to cover the big announcement- the Cosmos had signed up 34-year old Pele to a contract in New York.

Rather than joining a European club, the 3-time World Cup champion opted to play in North America and expand the frontiers of soccer in the United States.

On his recruiting mission to try and bring over the Brazilian star, Cosmos General Manager, Clive Toye, stated to Pele that with Juventus, or Real Madrid, he would win just another championship. But with the Cosmos, he would win a nation.

It wasn’t easy nabbing the legendary footballer since he was legally designated a national treasure by the Brazilian government and as such, a hands-off asset to foreigners. But when his tenure expired with Santos, the Brazilian soccer team where he made his career, the 5’8 striker was now open for bidding.

Warner, which had by now acquired the Cosmos from its original investors, dispatched their legal team to Brazil to negotiate a contract with the ‘King’. Pele wanted $5 million over 2 years, which Warner refused. Talks continued and in the end the New York media company got more than just a goal-scorer; they got a brand.

By accepting Warner’s offer, Pele became the highest paid team athlete in the world. However, the parties hit a wall when the Brazilian government insisted that the dribbling master spend another year playing in Brazil.

At this point, Ross, whose Warner Communications was headquartered at New York City’s Rockefeller Plaza, reached out to Nelson Rockefeller, administrator of the historic landmark. More importantly, the scion of the billionaire family was also U.S. Vice-President with extensive political contacts.

Rockefeller had no interest in getting involved with the Pele negotiations, but he referred the matter to Henry Kissinger, Secretary of State. An avid soccer fan, Kissinger played goal keeper as a youngster. A year earlier, he attended the 1974 World Cup in West Germany when the host nation defeated the Netherlands 2-1.

Kissinger managed to convince the Brazilian foreign minister to release Pele to the U.S., suggesting that it would improve relations between the two countries. Before he decided to sign up with the Cosmos, Pele also received a cable from Kissinger in which the Secretary of State said, “Should you decide to sign a contract, I am sure your stay in the United States will substantially contribute to closer ties between Brazil and the United States in the field of sport”.

Five days after his glitzy unveiling at the ‘21 Club’, Pele made his debut in a friendly match against the Dallas Tornado. Over 21,000 spectators showed up at the dilapidated Downing Stadium, which normally saw soccer crowds of less than 5,000.

An estimated 10 million television viewers tuned in with CBS covering the first Cosmos game on network television. A year later, the Cosmos moved to Yankee Stadium and in 1977, Pele’s final season with the team, they moved to Giants Stadium, which became their permanent home.

But while the star-studded  team was attracting more than 40,000 fans for their home games, the initial euphoria of soccer’s arrival to the U.S. started to fizzle.

The number of Americans drawn to the sport was falling and a broadcasting deal with ABC was lost as  telecast games barely registered 2 million households. Financially, NASL was overspending and Warner, the Cosmos’ patron sponsor, was wrestling with its own business problems  by the early 1980s. Ross could no longer justify bankrolling the club.

NASL and the Cosmos folded in 1984. In their 14 years of existence, the Cosmos never made money for their owners, but the vision of Steve Ross and his management helped plant the seeds for the game in America.

A decade later, Major League Soccer would pick up on the ruins of NASL and overcoming its own start-up challenges, eventually carry the game to where it is today.