Two Brothers and the Battle for Athletic Footwear

One sibling launches Adidas, another Puma 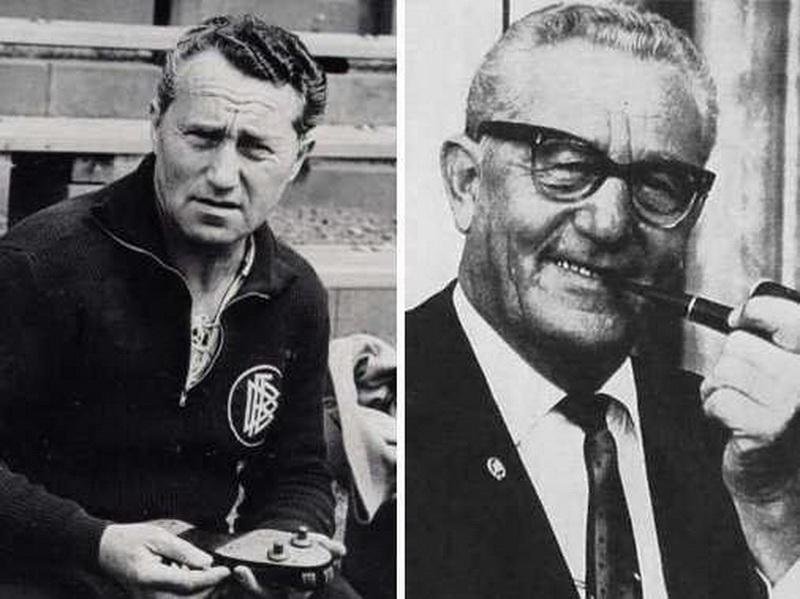 German brothers Adolf Dassler (left) and Rudolf Dassler (right). They built the Dassler shoe company before World War II but a bitter family split in 1948 led Adolf to create Adidas and Rudolf to launch Puma.
Posted Sunday, May 1, 2022 8:00 am

Three generations ago, German brothers Adolf and Rudolf Dassler parted ways in a bitter sibling quarrel. Their business was split, their family became divided, and soon enough even the town folks migrated to opposite sides of the camp.

This seemingly inconsequential feud in a provincial corner of Germany had enormous repercussions on what future athletes would wear on their feet. Adolf went on to found Adidas and his older brother Rudolf followed by launching Puma.

Today, Adidas and Puma are the second and third largest sportswear manufacturers in the world, respectively (Nike is first). Still headquartered in the same town, the two corporate behemoths are publicly traded on the Frankfurt Stock Exchange and the controlling interests of the old family factions are long gone.

This made-for-cinema generational story goes back to 1924 when the siblings formed the Dassler Brothers Sports Shoe Factory - Gebruder Dassler Sportschuhfabrik- in the small Bavarian enclave of Herzogenaurach.

Adolf as the design craftsman and Rudolf as the charismatic salesman, they started off in their mother’s laundry room before eventually rising to become their own global giants.

Herzogenaurach had traditionally been a textile town and Adolf and Rudolf’s father, Christoph, was the last in a line of Dassler weavers and dyers. He picked up stitching skills and became a cobbler when the local industry started to decline and a new one was on the rise. By 1922, Herzogenaurach, home to a population of just 3,500 people, boasted over 100 shoemakers.

As a young man, Adolf especially was active in a variety of sports that included track & field, soccer, boxing, and skiing. After learning the stitching trade from his father, he began thinking how specialized shoes for each sport might serve to improve athletic performance.

Do you shop on AMAZON? Support SPORTS HISTORY WEEKLY and CLICK HERE for ANY of your AMAZON shopping needs

By 1925, the Dasslers were making leather soccer shoes with nailed studs and track shoes with spikes. They outfitted prominent German runners like Lina Radke who won gold in the 800m competition for women at the 1928 Games in Amsterdam.

The big break for the two brothers came at the 1936 Summer Olympics in Berlin when Adolf approached American sprinter Jesse Owens, unpacked a suitcase filled with spikes, and persuaded him to run with a pair. Owens ended up winning 4 gold medals, while other athletes whom the company outfitted as well took home an additional 3 gold, 5 silver and a bronze.

Dassler became an overnight commercial success. Sales exploded to 200,000 pairs a year and would have continued growing if it weren’t for the outbreak of the second World War.

Adolf and Rudolf joined the Nazi party with the latter showing greater devotion to the cause. Their factory was converted to producing materiel for Germany’s war effort.

It’s during these war-time years and immediate post-war period when the relationship between the two brothers and their wives and families began to fissure. The exact cause is unknown, but speculations range from simple jealousy and personality conflicts to political disagreements and betrayals.

By 1948, the two broke off from each other and set up their own shops, one north of the Aurach river and the other south of it. Adolf named his new company ‘Adi-das’, a derivation of his first and last name. Rudolf initially tried ‘Ruda’ but then settled for ‘Puma’.

If competition fosters innovation and progress, then Adidas and Puma certainly came to define that pillar of capitalism. The personal rivalry between Adi and Rudi deepened, fueling a drive for footwear supremacy that eventually crossed borders and reached millions of people around the world.

Do you shop on AMAZON? Support SPORTS HISTORY WEEKLY and CLICK HERE for ANY of your AMAZON shopping needs

At home, the shoe drama and the family rupture gripped the small town of Herzogenaurach. Brand loyalty took root among the locals as they proudly displayed Adidas or Pumas on their feet.

Later on, their tribal leanings carried over to clothing and accessories. Some shopkeepers such as butchers and grocers displayed their preferred brand in their store windows and remarked that patrons favoring the company from the other side of the river should not visit their shop.

At the opening whistle of the 1970 World Cup final between Brazil and Italy, Pele was shown bending down to tie his shoelaces in a seemingly ordinary act. In fact, it was a prearranged marketing ploy with his shoe sponsor to draw the attention of millions of TV viewers to his Pumas.

In what is possibly the first case of a prominent Olympian receiving financial compensation to wear shoes, Rudolf paid Armin Hary, a German sprinter, to run in Pumas at the 100m final of the 1960 Summer Olympics. Hary had worn Adidas before but Adi refused to pay him. The German sportsman won the dash and became the first athlete to finish the 100m sprint in 10 seconds.

But when he stepped on the podium to receive his gold medal, he laced up in Adidas in hopes of cashing in from both companies. The surprising maneuver failed and left both corporate executives enraged.

Never reconciling in life, Adolf and Rudolf both died in the 1970s and are buried in the same churchyard in their home town, resting physically as far apart as possible. Their descendants took over their respective family businesses.

In 1986, Puma was floated on the Frankfurt stock exchange and three years later, Rudolf’s sons Armin and Gerd sold their majority interests in the firm. Adidas went public in 1995 and the last family member to work at the firm, Adolf’s grandson Frank, stayed on through 2017.

In 2009, Adidas and Puma employees staged a friendly soccer match to try and bury the hatchet for the first time since the family split. Despite the smiles and the goodwill handshakes, the ghosts of Adolf and Rudolf could never be purged and their rival spirits will always hover over the small town of Herzogenaurach.