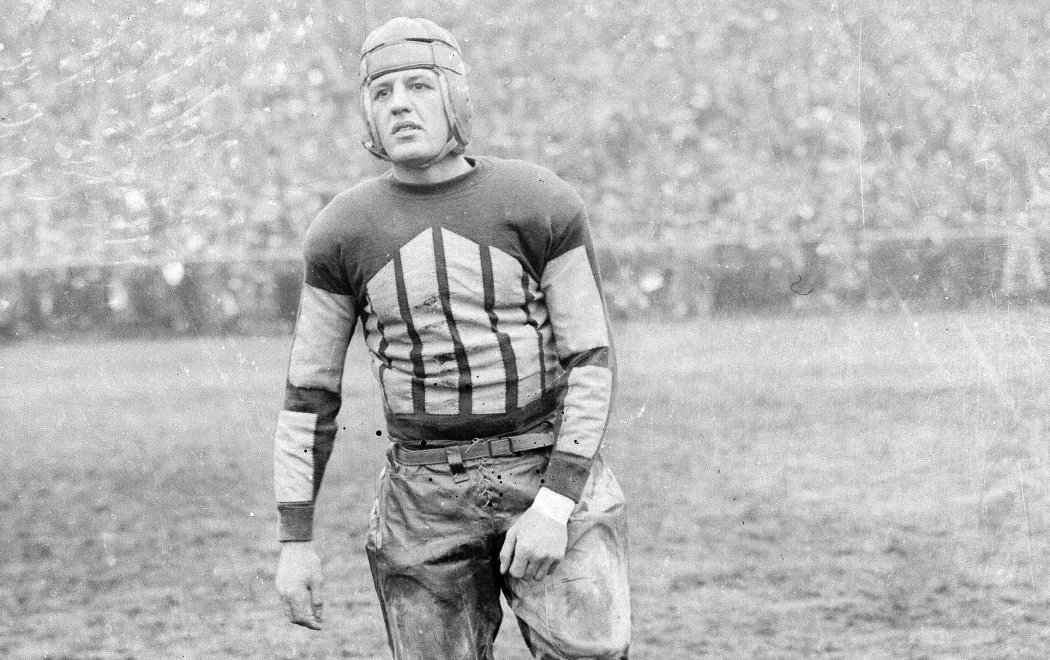 Harold "Red" Grange of the Chicago Bears shown in 1925. George Halas, owner of the Bears and one of the founders of the NFL, referred to Red as "The Eternal Flame of Professional Football".
Posted Sunday, December 15, 2019 8:00 am
By Chris Willis, Head of Research Library at NFL Films

Throughout 2019, the NFL celebrated a century of players, coaches, owners, front office executives, fans and announcers who have made the story of the NFL a true rags-to-riches tale like none other in American history. But how did the league, and in particular its players, achieve this? Who was the first superstar in the NFL that laid down the blueprint of today’s professional football athletes, some of whom are the most renowned sports figures in the world? That foundation was built nearly 100 years ago by a gridiron star named Red Grange.

Harold Edward Grange was born in 1903 amidst the mountains of central Pennsylvania to an athletic-minded mother and a lumberjack father. Nicknamed “Red” from an early age because of the auburn shade of his hair, the future football star lost his mother when he was just six years old. Because of this tragedy Red’s father moved his family to Wheaton, Illinois, a small town just 30 miles west of Chicago, to be closer to his brothers and sisters. Red grew up with his brother Garland in the shadow of their stocky, hardworking father, who eventually became police chief of Wheaton.

The shy and hardworking son of a police chief soon became a prodigy athlete at Wheaton High School. This success soon took him to the University of Illinois where he became an even bigger star because of his football exploits. Red became a three-time All-American halfback under the guidance of the legendary Bob Zuppke, but it was a game against the University of Michigan in 1924 that made him achieve legendary status during the Roaring Twenties. As a junior, Red blazed through the Wolverines defense for five touchdowns, four of which came in the first twelve minutes of the game; the Illini routed their opponents 39-14. The next day, every newspaper in the country ran articles and headlines describing Red’s remarkable feats on the field. The most famous sportswriter at the time, Grantland Rice, wrote a poem that described Red as a “Galloping Ghost” on the gridiron, thus popularizing one of the most famous nicknames in sports history. Red’s life would never be the same.

He quickly became associated with other well-known athletes of the Roaring Twenties, sharing headlines with Jack Dempsey (boxing), Bobby Jones (golf), Bill Tilden (tennis), and the country’s most famous sports figure- Babe Ruth (baseball). The rise of mass media at the time in newspapers, radio, and movie newsreels made Red an immediate recognizable star. Although he never craved the attention or the credit for his accomplishments, he consistently praised his teammates for his success, a trait that endeared him with everyone. But if there was one aspect of his celebrity status that he did embrace and take seriously, it was being a role model for America’s youth.

After his college career was over, Red did the most unpopular thing he could do at the time- he played professional football. After turning pro in the fall of 1925, a day following his last college game at the University of Illinois, Red joined the Chicago Bears who were owned by George Halas and Dutch Sternaman. Traveling the country on a barnstorming tour that had never been attempted before, Red played to massive crowds and set attendance records in large cities such as Chicago, Philadelphia, New York and Los Angeles. A pro football record crowd of 75,000 filled the L.A. Coliseum. The barnstorming tour of 1925-1926 did not “save the NFL,” as some experts might claim, but what it did do was give the young league- only in its 6th year of existence- much needed star power and publicity with Red in the ranks. Having pro football in the newspapers, radio, and movie houses across the country helped the league as never before. Although football was still decades away from becoming the most popular sport in America, the Red Grange tour showed what the game could be and what a superstar NFL player would be.

His model of a professional football athlete started in 1925 and would pave the way for future stars such as Sammy Baugh, Johnny Unitas, Jim Brown, Joe Namath, Walter Payton, Peyton Manning, and current stars such as Tom Brady, Cam Newton and Aaron Rodgers. After retiring from the NFL in 1935, Red once again created the mold of an accomplished NFL veteran, becoming a coach, a radio & TV announcer, and a member of the Pro Football Hall of Fame. In October of 1978, Red returned to his hometown of Wheaton for a weekend celebration titled the “Red Grange Homecoming.” During this weekend he spent time with the man who helped launch his NFL career over 50 years earlier, George Halas. The two men passed hours reminiscing about the “good old days” when they barnstormed across the country, exhibiting to thousands of new fans what the sport could be on a professional level. In 1978, the NFL surpassed baseball as the number one sport in America with 13 million fans paying to see NFL games and the Super Bowl being watched by over 78 million viewers.

As one of the founders of the NFL, George Halas always referred to Red Grange as the ‘Eternal Flame of Professional Football’. Today, the NFL’s 700-page Record & Fact Book does not mention his name in any of the records. The Chicago Bears Media Guide doesn’t mention Red in any of its records either. But if one were to write the history of the NFL, his name might be the first one to stand out. Harold “Red” Grange became the first star of the NFL as well as the current definition of what a superstar NFL player is in 2019. Although he often said he would be forgotten, the Galloping Ghost was wrong. Four generations since playing his last game, he is still remembered as the ‘Eternal Flame’ of the National Football League.

Chris Willis is the author of the recently published book, “Red Grange: The Life and Legacy of the NFL’s First Super Star”. The book is available for sale on our website.

Other Articles Enjoyed:  When Rugby Lost Out to Football, From the Gridiron to the White House, The Heisman Trophy as a Non-Predictor