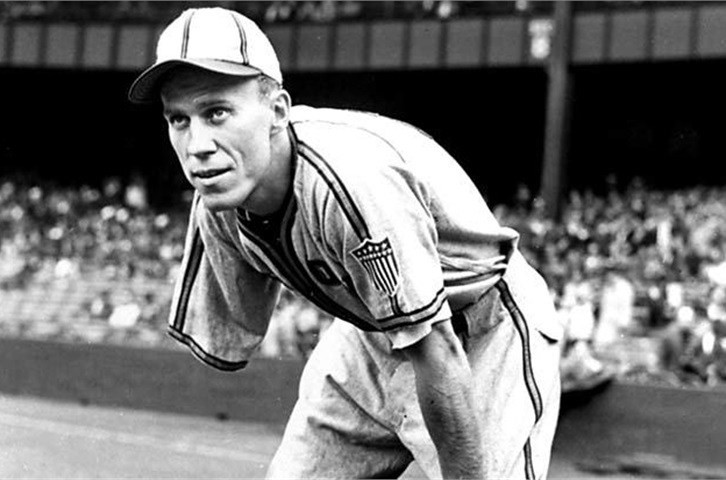 Sixteen years ago this week, one of baseball’s most inspirational figures died at the age of 87. Pete Gray spent less than 6 months in the majors and batted just .218, yet he played during a critical time in the nation’s history and he did it with one arm.

Gray debuted with the St. Louis Browns on April 17, 1945, five months before WWII ended. The U.S. had entered the war in December,1941 and along with the millions of Americans who were called up for the draft, baseball’s greats were no exception.

Celebrated sluggers like Joe DiMaggio, Ted Williams and Hank Greenberg were just a few of the hundreds of major leaguers who traded their team jerseys for military uniforms.

Not surprisingly, the professional game was sapped of its most talented players and teams filled their rosters with military rejects, quasi-pros, and hopeful amateurs.

One-armed Pete Gray joined the Browns after two seasons with the Memphis Chics, a minor league team in the Southern Association. The Chics finished last in 1943 but the Pennsylvania native himself excelled, playing 126 games and batting .289.

But after Philadelphia sports writers honored the handicapped sportsman with the ‘Most Courageous Athlete’ recognition, Gray humbly responded: “Boys, I can’t fight and so there is no courage about me. Courage belongs on the battlefield, not on the baseball diamond”.

In fact, Gray tried to enlist in the army after the attack on Pearl Harbor but was denied because he was an amputee. Later on, he visited hospitals and rehabilitation centers to boost morale among wounded veterans.

On the field, Gray’s style of play was as fascinating as it was inspirational. Having lost his right arm above the elbow in a childhood accident, the son of Lithuanian immigrants nonetheless followed his baseball dream and pushed away any sympathy.

Gray pursued the game with an aggressive and unbridled focus. In one of his minor league games he even broke his collar bone trying to steal third base in a head-first slide.

The baseball marvel learned to hit with rapid swings of his left arm and bunted by resting the knob of the bat against his side. In defense, Gray removed most of the padding from his glove and developed an effective outfielding technique.

After catching the ball, he would insert the mitt under his stub arm, squeeze the ball out along his chest, and then grab and throw; all with remarkable speed.

Gray’s second year with the Chicks was even better than his first. He stole 68 bases, knocked 5 homers and batted .333. At season’s end he was named the Southern Association’s MVP.

Scouts from the pros started coming around and the St. Louis Browns picked up his contract for $20,000, the largest sum paid for a Southern League player at the time.

The 6’1” 169 lb. disabled ballplayer finally got his break in MLB but emotions ran mixed once he hit the field.

The Browns won the AL pennant the previous year but struggled financially after drawing only half a million fans to their stadium. Among his teammates especially, Gray was seen as a sideshow intended to boost fan attendance and raise ticket sales at the gate.

After the war ended Gray was sent back to the minors where he spent a few more years before settling back home.  Conflicted and prone to gambling and alcohol, he struggled with his legacy as an exploited, one-armed ballplayer.

Nevertheless, asked once how he thought he would do if he hadn’t lost his limb, he replied “Maybe I wouldn’t have done as well. I probably wouldn’t have been as determined”.

An inspiration to thousands of maimed veterans and handicapped children, Gray died on June 30, 2002.