Basketball as the great transformer 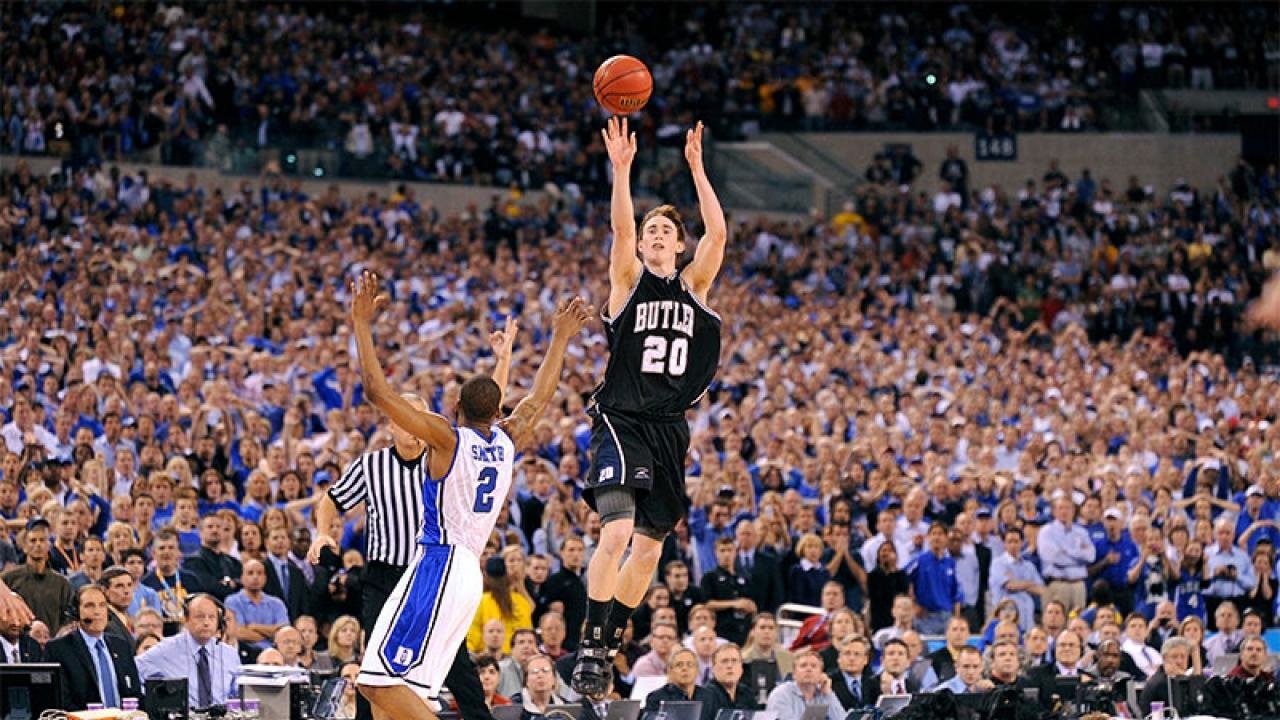 Butler's Gordon Hayward launching a shot against Duke at the 2010 NCAA championship. Butler lost the match, but as a small school its visibility at the tournament exploded and student applications soared by 41%.
Posted Sunday, July 11, 2021 8:00 am
By Jonathan Yates, sports writer and talk show host

Since 1963, when Loyola University Chicago defeated the University of Cincinnati at the NCAA national championship, basketball has always been the great transformer for small colleges.

Making their debut at the NCAA Tournament, the Loyola Ramblers were going up against the two-time defending champions, Cincinnati Bearcats. After trailing by 15 points in the second half, Loyola rallied to force an overtime and defeat their larger and more accomplished rivals, 60-58.

The winning basket was scored in the final second by Vic Rouse, a player who went on to earn a PhD and build an academic career for himself rather than play professionally. Nevertheless, he had helped beat Cinci, home of  legendary Oscar Robertson, a 3-time NCAA scoring leader.

Football is still dominated by the usual powers, as are other campus sports. But history suggests that only basketball can raise the stature of a commuter school into one that has the team and coaches cutting down the nets in front of millions of TV viewers.

From these victories, the entire school benefits very much in a holistic sense as its visibility soars, along with the number of applicants, quality of the recruits, donations from alumni, support from the community, and its overall q-rating for the media and public.

The level of play and quality of players from these lesser-known institutions have even helped the U.S. win gold medals in the Olympics. Jim Barnes, who started off at Cameron before transferring to Texas Western, was center on the 1964 U.S. Olympic squad, which won every game except one by double digit margins.

Others from similar schools who starred on Olympic teams included John Stockton from Gonzaga, Mark Aguire from DePaul, and both Bill Russel and KC Jones from the University of San Francisco.

Back then, had Team USA gone with a group of small college players featuring Bob Lanier (St Bonaventure), Artis Gilmore (Jacksonville University) and Marvin Barnes, Ernie DiGregorio, Kevin Stacom and Jimmy Walker, all from Providence College, we might have beaten the Soviets for the gold at the 1972 Olympics.

Going into the tournament, the Retrievers were rated No. 16 and the Cavaliers were seeded No. 1. It took just a single win against the highest rated school in the South Regional to put UMBC on the radar, even though it happened in the initial Round of 64. The following game they lost 50-43 against Kansas State and fell out of contention.

Nevertheless, a 2019 headline in the Richmond Times Dispatch summed it up nicely. "A year later, UMBC has become a household name after beating No. 1 UVA. Can the school capitalize?" UMBC’s twitter account had skyrocketed from 5,000 followers to 105,000. Applications increased by 10% along with the caliber of students.

Sister Jean would not have become a national figure with her bobblehead selling for $300 on eBay if it were not for Loyola University Chicago going to the Final Four in 2018. Losing to Michigan 69-57, it was the first time they made it that far since their memorable performance in 1963.

Over the years, schools that earned their bones with victories over more developed basketball programs include Gonzaga, Butler, Wofford, GMU, VCU, and others. Gonzaga basketball, though dating back to the 1907-08 season, only took off in 1995 when the 14th-seeded private college made the NCAA Tournament for the first time in its history.

Four years later, Gonzaga became a Cinderella tale after overtaking Minnesota, Stanford, and Florid, but losing out to Connecticut in the Regional Finals. Since then, the school has become a perennial March Madness participant and was even referenced in an April 2, 2021 article in the Wall Street Journal as possibly “the best college basketball team- ever” after producing an undefeated season.

Butler is another small private college that exploded to national prominence in the late 1990s with success on the court. A March 12, 2012 article by ESPN noted that Butler gained an estimated $1.2 billion in publicity value from its tournament runs in 2010 and 2011. Applications for the Indiana school surged by 41%.

Wallace Loh, the former President of the University of Maryland, stated that the athletic department is now the "front porch" of the school’s marketing brand. Clemson University President James Clement commented about winning in sports, "People are happier. People feel good. That allows me to recruit more students, raise more money…”

Looking to enhance their profile, small colleges also got smart with the rule changes in basketball. Since hoops has always been a big man’s game, the 3-point shot became a blessing for resource-limited institutions when it was first introduced by the NCAA in 1987.

Furthermore, high school players know that if they are not among the top recruits in the country destined for the NBA early, then they will spend more time sitting on the bench than running the ball in powerhouse schools. But a program like Butler’s, or one of similar size, offers greater opportunity to work into the starting lineup as a junior or senior.

As football brings in 70% of the revenue in college sports, that would seem to be the way to go for academic centers looking to raise their stature from athletics. But football requires a roster many times that of a basketball team, not to mention expensive equipment, costly travel, and a showcase stadium for game day.

It's also great to have a top recruit at every position, but having a couple of players who are serviceable rather than stars will not cripple a basketball team like it might in football. As such, it’s not a surprise that many of the smaller basketball schools don’t even bother fielding football teams.

For small colleges looking to build on their limited foundations, basketball, more than any other sport, has proven to be the golden road.

Jonathan Yates is host of "The Culture of Sport". He has written numerous articles in outlets such as Newsweek and Washington Post, and held interviews at NPR and CNBC.