Striving for athletic glory at 50 through 100+ 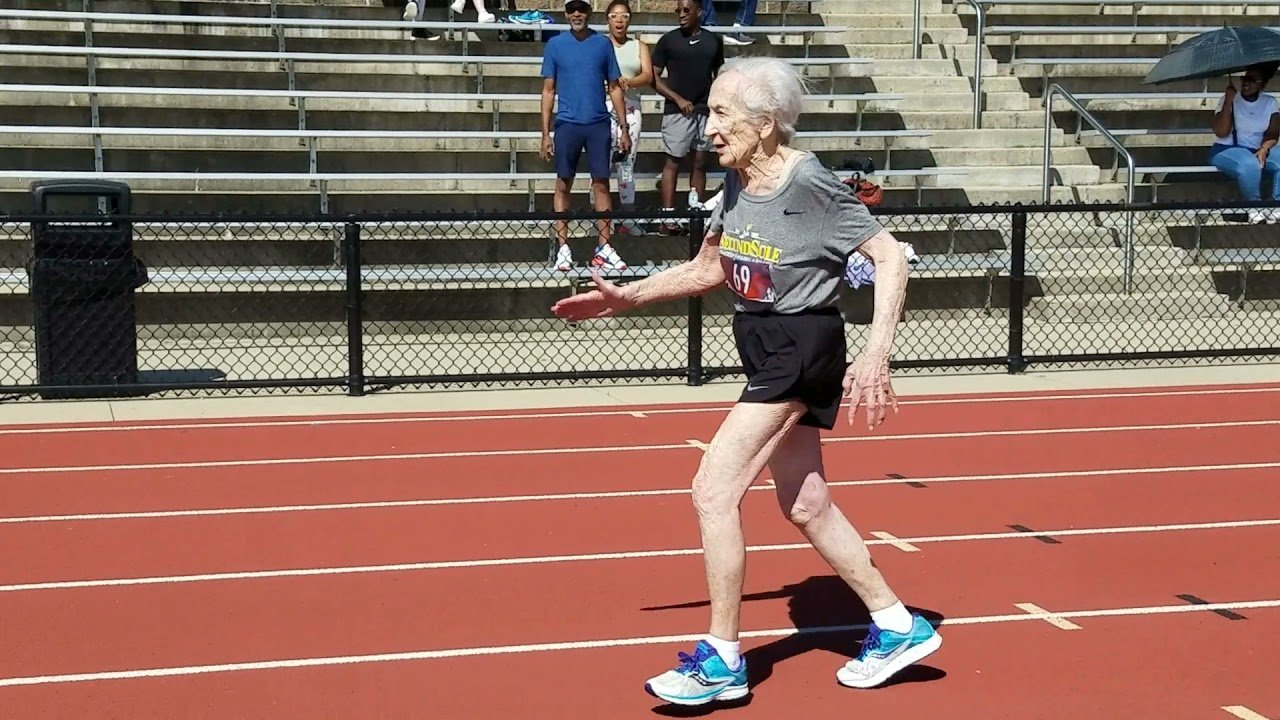 It’s never too late to win a gold medal.

Every two years, thousands of athletes gather at the National Senior Games (NSG) to compete and set new records. But they aren’t the young and brawny sports figures featured in every day media. They are baby boomers and beyond, striving for an active life and defying the ravages of time.

“If you adjust for age, there are people here who would easily be in the Olympics”, says Del Moon, Communications and Media Director at the NSG Association.

This past summer at the Michigan Senior Games, Diane Friedman, a 100-year-old Midwesterner, was the talk of the Track & Field circuit when she broke the world record in the 100m and 200m dash for her age group.

As a point of reference, the current record for women in general in the 100m and 200m sprints is 10.49 and 21.34 seconds, respectively, both set by Florence Griffith-Joyner at the Seoul Olympics in 1988.

Handicapping for age in a straight-line calculation, Diane beat Florence by a fraction of a second; the Olympian was 28 years old when she set the 100m mark. But in the 200m stretch, Diane came short and Florence won by 14 seconds.

As if Diane’s accomplishments weren’t impressive enough, she threw the javelin 6.25 meters for a new American distance. An avid participant in Track & Field events, she competed in her 70s, broke records in her 90s, and was featured twice in “Sports Illustrated" magazine.

Do you shop on Amazon? Support us at SPORTS HISTORY WEEKLY by clicking here and surfing for ANY of your Amazon products

Similar to the Olympics, the NSG are sanctioned qualifying events that offer individuals and teams a chance to win gold, silver and bronze. However, entrants must be at least 50 years old and the age group categories are divided into 5-year increments.

In 2017, the NSG celebrated its 30th anniversary in Birmingham, Alabama with over 10,000 sportsmen and women. Humana, the health insurance company, has been the biggest sponsor at the nationals. Locally, universities have donated their athletic facilities for the events.

The original Games were the brainchild of Warren Blaney, a Los Angeles businessman who staged the first ‘Senior Olympix’ in 1970. Over the next decade, the movement spread with the explosion of fitness in America and by 1987, the national tournaments were launched in St. Louis, Missouri.

At the inaugurals, some 2,500 athletes showed up to compete in 15 different sports. An estimated 100,000 spectators attended the opening ceremonies, which included actor and entertainer Bob Hope. Since then, the athletic extravaganza has been held biennially in different cities across the country.

89-year-old Ed True has been there since the beginning and he has seen the number of participants grow exponentially. A resident of the St. Louis area, he volunteers and competes in most of the field events, including the shotput and discus. Over the years, he racked up 28 medals, of which 19 were gold.

His most heartwarming memory was watching a blind woman run the track, tethered to a man who was guiding her along the way. Asked what advice he would give seniors who might consider joining, Ed replies “Don’t hesitate to try it, you’ll have good friendly competition and find it rewarding.”

Do you shop on Amazon? Suppport us at SPORTS HISTORY WEEKLY by clicking here and surfing for ANY of your Amazon products

From its inception, the mission of the NSG has been to promote healthy lifestyles for older adults through education, fitness and sport. “The biggest challenge for older people is getting out of that chair”, says Dr. Bruce Sherman, an exercise physiologist who also coached Diane Friedman.

Athletes still need to qualify in the State Senior Games and meet specific criteria in order to make the nationals. But Sherman suggests that before jumping in and selecting an event, seniors should seek clearance from their doctor. Bone and muscle strength, as well as sound balance and good eyesight, are key to avoiding injuries.

Even for seniors who lead active lives, training should be tailored to the individual’s physical condition. In the case of Diane Friedman, Sherman prescribed a cardiovascular and muscle-building regimen around the treadmill, elliptical, dumbbells, and medicine balls.

79-year-old Kate Fisken from Bethesda, Maryland was one of 15 athletes to receive Humana’s 2017 Game Changer Award, which recognizes athletes who exemplify healthy aging and inspiration for seniors. Kate picked up swimming as a therapeutic form of exercise after an accident left her with a spine injury. She usually places 4th, 5th and 6th at the national swimming events in the 75-79 age group.

In 2019, the NSG was held in Albuquerque, New Mexico. After the torch arrived to ignite the ceremonial cauldron, the evening was followed by “Noche de Fuego” song and dance festivities, a reminder that the Games also offer seniors an opportunity to travel, sample local culture, and engage socially.

The 2022 nationals are scheduled to take place next May in Fort Lauderdale. For the first time, organizers will present the NSG Cup, an award given to the state that wins the most medals per athlete. The idea is to create a level-playing field among states large and small for recognition and bragging rights at the Games.

The NSG has grown to become the largest qualified multi-sport event in the world. Drawing elite athletes who are 50 years old and above, it has shifted the paradigm of what it means to be a senior.