An Iconic Photo that Belies the Real Story

Was it a knockout punch, or a dive? 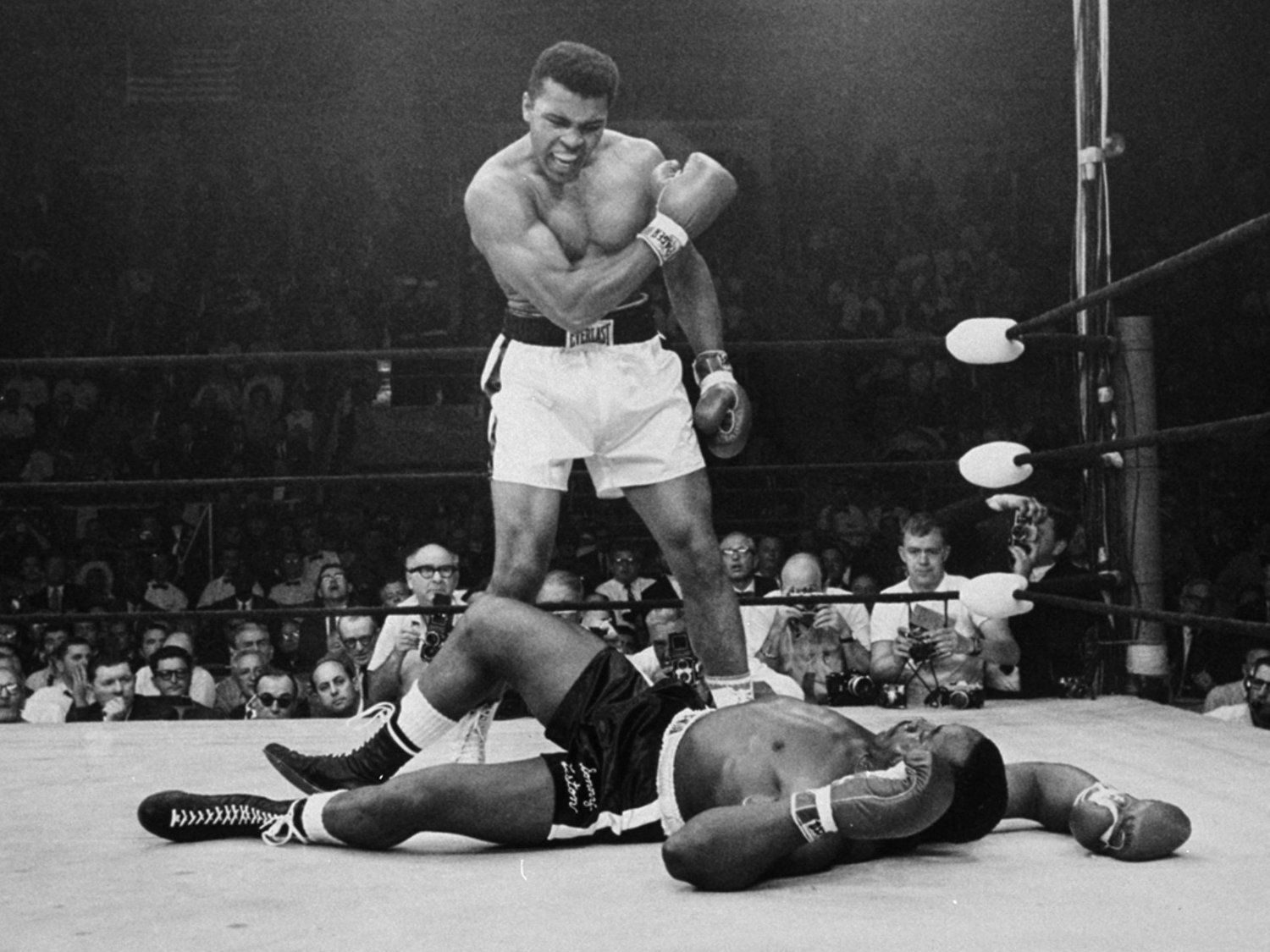 Muhammad Ali towering over a floored Sonny Liston at their second encounter for the heavyweight title (May/1965). Speculation remains that Liston took a dive on a "phantom punch".
Posted Sunday, January 23, 2022 8:00 am

On the night of May 25th, 1965, photographers John Rooney of the Associated Press and Neil Leifer of Sports illustrated snapped similar pictures of Muhammad Ali towering in triumph above a floored Sonny Liston.

The image of the victor standing over the vanquished would become one of sports’ most iconic snapshots, recognized universally as a quintessential Ali moment. But the picture belies the full story behind the fight, which is still wrapped in mystery and bizarre circumstances.

It was Muhammad Ali and Sonny Liston’s second encounter. Fifteen months earlier, the young and brash Cassius Clay defeated an older Liston to capture the world heavyweight title. A 7-to-1 underdog, Clay had dethroned boxing’s most fearsome pugilist and a second fight was in the making.

Clay was coming up after reaching prominence at the 1960 Summer Olympics in Rome where he won gold in the light heavyweight category. Just weeks after bringing home the medal, he stepped into the ring for his first professional fight and dispatched Tunney Hunsaker in a unanimous decision. By the time he got to Liston, he was undefeated at 20-0.

Liston was already a seasoned ring master who took out Floyd Patterson for the big title. Tough and intimidating, Liston packed a lethal punch at the end of an 84-inch wingspan, 6 inches longer than Ali’s. His massive fists also measured 15 inches in circumference, larger than a slow-pitch softball.

Do you shop on AMAZON? Support SPORTS HISTORY WEEKLY by clicking here for any of your AMAZON shopping needs

Behind Liston’s menacing physicality was also a rough upbringing and a mean-street lifestyle. Growing up under the whip of an abusive father, Liston turned to violent crime at an early age. His run-ins with the law landed him behind bars where he picked up boxing.

Throughout his life, the “Big Bear” remained an illiterate, unsympathetic figure and as he climbed up the fisticuff rungs, he also mixed it up with the mob. But when Liston made his way into the ring to meet Ali for the second time, it was Ali who got the ‘boos’ and Liston who drew the cheers.

After their first fight in Miami, Cassius Clay announced his name change to Muhammad Ali and became affiliated with the Nation of Islam, a radical black organization. Boxing fans and white America in general had nothing but contempt for Ali’s new persona.

Originally scheduled to take place at the Boston Garden, the fight was moved at the 11th hour to Lewiston, Maine, a small mill town located 2½ hours north of Boston. Massachusetts officials feared mob influence on the match and sought an injunction to block the event. Rumors also spread that Ali was on the hit list of the Nation of Islam after one of their leaders, Malcolm X, was assassinated earlier in the year.

The contention for the world heavyweight title was now set to unfold at St Dominic’s Arena, an indoor high school hockey rink that held fewer than 4,000 seats and was surrounded by a gravel parking lot. A boxing ring was hastily built to accommodate the event, which saw a sudden influx of outsiders.

The last time a heavyweight prize battle was fought in a small town was in 1923 in Shelby, Montana where Jack Dempsey defeated Tommy Gibbons. Officials there agreed to host the match with the hopes of kickstarting a tourism economy (though, it failed miserably).

The entire fight lasted less than 2 minutes. The bell rang a little after 10.40 pm and it was all over near the 1 minute and 40-second mark. It was during these moments and at this unlikely New England spot that John Rooney and Neil Leifer snapped one of sports’ most enduring photos.

Rooney’s black & white picture made the AP wire and was featured on front pages all over the country. Decades later, Leifer’s color shot would make the cover of the Sports Illustrated issue of the Century’s Greatest Sports Photos.

While the image suggests a harsh conclusion to a brutal fight, Ali is actually yelling at Liston, “Get up and fight, sucker!” Liston went down after Ali threw a chopping right to his head, but the punch was awkward and lacked power. As fans screamed and confusion ensued, Liston did get up after the photo was taken and the fight briefly resumed before being declared over for missing the count.

Ali’s swing became known as the “phantom punch” and it remains one of boxing’s most controversial episodes. Most attendees, including both regular fans and professionals associated with the sport, weren’t exactly sure what they saw since it happened so quickly. Was it a knockout blow, or did Liston take a dive?

Do you shop on AMAZON? Support SPORTS HISTORY WEEKLY by clicking here for any of your AMAZON shopping needs

Some believe that Liston was simply past his prime and couldn’t handle the punishment. But speculation remains rife that Liston threw the fight, with theories ranging from a mob fix to his own fear of the black Muslims.

After the fight, the Maine Boxing Commission seized Ali’s and Liston’s gloves for an investigation, but nothing conclusive emerged. The gloves eventually ended up with a series of collectors before being sold in 2015 at a New York auction house to an anonymous buyer for $956,000.

Five years after their notorious encounter, Ali’s mysterious punch was followed by Liston’s mysterious death when his lifeless body was found at his home in Las Vegas. The body too decomposed to generate conclusive tests, it was assumed that he died of lung congestion and heart failure, induced by heroin injection.

A sad end to a controversial figure, the one-time champ who is forever captured sprawled at the feet of Ali has only two words inscribed on his headstone: ‘A Man’.