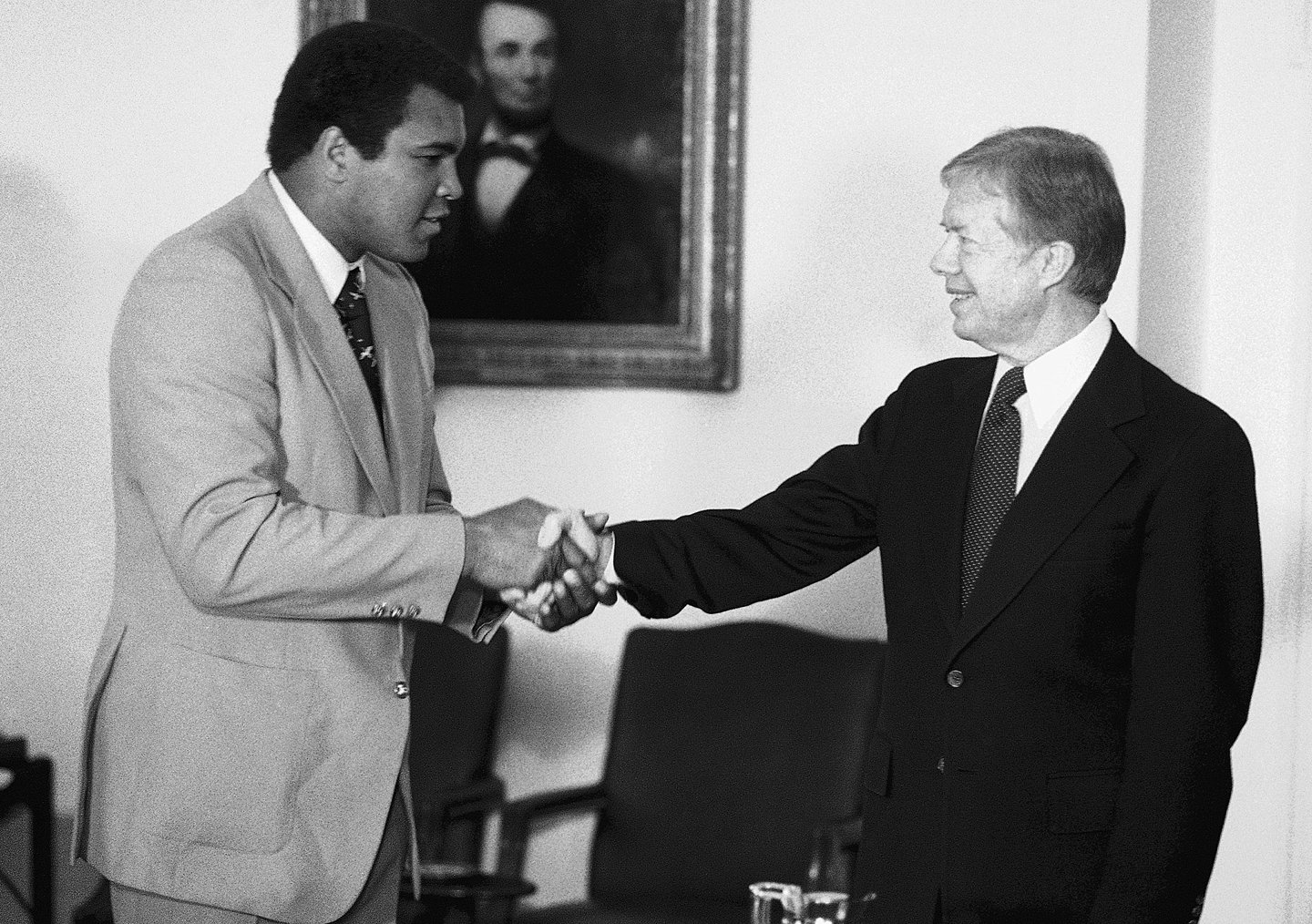 Muhammad Ali shaking hands with President Jimmy Carter at the White House on February 11, 1980. The boxing champ had just returned from a disastrous diplomatic mission in Africa to rally support for Carter's boycott of the Olympics. Within a year, both men would face the end of their respective careers.
AP
Posted Sunday, August 2, 2020 8:00 am

In 1980, the intersection of sports and politics came to a bizarre head. Faced with the Soviet invasion of Afghanistan in 1979, President Jimmy Carter was weighing his retaliatory options.

The choices were limited given the climate of the cold war, so the White House reluctantly went with boycotting the Summer Olympics that were scheduled to take place in Moscow.

In trying to build a coalition of willing nations to follow his lead, Carter turned to heavyweight boxing champion, Muhammad Ali, to rally African countries to his side. But in the end, Ali failed, Carter failed, and within months both men would see the end of their respective careers.

The 1980 Summer Olympics were the first games to be held in Eastern Europe. Six years earlier, the International Olympic Committee (IOC) selected Moscow over Los Angeles to host the Games of the XXII Olympiad, a tremendous vote of confidence for the world’s leading communist country.

146 nations would descend on the Grand Arena of the Central Lenin Stadium in Moscow for two weeks of a televised sports extravaganza. It was a chance for the USSR to showcase its athletic talents and societal achievements in a bipolar universe of two superpowers vying for global influence.

But then came the geopolitics. On December 27, 1979, the Soviet Union sent troops into Afghanistan to prop up a government that was under siege.

Russia’s move was a political miscalculation that drew condemnation from around the world, but there was no consensus on how to respond. On January 20, 1980, Carter publicly announced that unless the Soviets withdraw their troops from Afghanistan within 30 days, the Olympics should be moved to an alternative location, or multiple locations, or be canceled outright.

IOC President Lord Killanin dismissed the suggestion, noting that it was too late and “It’s Moscow or nothing”. Even inside the administration there was skepticism, with CIA Director Stansfield Turner arguing that the toothless ultimatum would do nothing to change Soviet behavior.

But polls showed that 55% of Americans did support boycotting the games. In Congress, the House of Representatives passed a non-binding resolution with a vote of 386-12 to cancel U.S. participation in the Olympics; the Senate passed a similar measure with an overwhelming majority of 88-4.

Nevertheless, at the United States Olympic Committee, where the crucial decision of not sending athletes to their competitions ultimately lay, there was resistance. Some feared for the future of the Olympics as an ongoing institution. Others, such as 4-time U.S. gold medalist Al Oerter, argued that athletic supremacy itself would be the fitting punishment.

Oerter noted that “The only way to compete against Moscow is to stuff it down their throats in their own backyard”.

Overseas, there wasn’t much unity either. American officials traveled to Geneva, Switzerland to try and galvanize support for a set of counter games, but only 12 of the 25 countries invited to the meeting showed up. At the outset, Canada and the UK were ready to follow suit but then they voted in new governments that were reluctant to join the campaign.

In the end, out of 146 countries that were to make the trip to Russia, only 66 sided with the U.S. by staying home. But before dispatching State Department personnel around the world to advance his cause, Carter recruited one of the most famous sports personalities on the planet, heavyweight champion Muhammad Ali.

Ali was a revered figure in the third world. Though past his peak and mostly retired from the ring, he still wore the heavyweight crown from the last match against Leon Spinks (1978).

His 1974 “Rumble in the Jungle” bout in Zaire (today’s Congo) against George Foreman and his 1975 “Thrilla in Manila” fight in the Philippines against Joe Frazier were still fresh in people’s memory. The faceoff with Foreman in Africa was watched by an estimated record audience of 1 billion TV viewers.

Adding to his resume was his gold medal from the 1960 Olympics in Rome when he topped the podium in the light-heavyweight category. The champ was now spending time on goodwill jaunts, which brought him into close contact with political leaders, celebrities, and a media that never got enough of the legendary glove master.

With his usual unrestrained wit, Ali dubbed himself the “black Henry Kissinger” when he took on the role of a diplomatic envoy. As a convert to Islam, Ali also saw the aggression against Muslim Afghanistan by a non-Muslim neighbor as an affront to his faith.

While in India during one of his charity trips overseas, the new sports emissary was given his itinerary, which would take him on a whirlwind tour of Tanzania, Kenya, Nigeria, Liberia, and Senegal.

The beloved black American who made it big in a white country was to echo Carter’s pitch to the world that sending athletes to Moscow was essentially a tacit approval of the Soviet occupation of Afghanistan. But almost from the beginning, the boxing heavyweight proved to be a diplomat lightweight.

Ali took punches in press conferences, which left him intellectually battered, confused, and unable to fight back. Without a firm grasp of the geopolitics involved, the questions left him dumbfounded and unconvinced of his own mission.

Starting in India, the Soviet ambassador kept Ali late into the night trying to convince him not to make the trip, though he still boarded the flight. On his first stop in Dar es Salaam, Tanzania, the President of that country refused to meet him and instead sent his minister of youth and culture.

Accused of being an American puppet, Ali reacted: “Nobody made me come here and I’m nobody’s Uncle Tom”. In Kenya, he said that Carter had sent him “around the world to take the whuppings of American policies”.

In Nigeria, radio broadcasts accused the Americans of hypocrisy since they didn’t support the 28 African nations that boycotted the 1976 Olympics. At the time, those countries were protesting New Zealand's inclusion at the Montreal games due to the kiwis' participation in sports programs with racially-segregated South Africa.

The former black nationalist who had a history of being a controversial figure back home had no answers for these talking points. Instead of being a steadfast diplomat on assignment, Ali was just being his unpredictable and unbridled self.

He turned the mission into a fact-finding trip by saying “You all had given me questions which are good and are making me look at this thing different.” Trying to shut down one press conference, the State Department came to realize that the damage was already done.

Time magazine called the entire episode “The most bizarre diplomatic mission in American history”. In the end, Kenya and Liberia supported the boycott, but Tanzania, Nigeria and Senegal made the trip to Moscow.

Four years after the 1980 Olympics, the Soviet Union retaliated by boycotting the Los Angeles games. Their military involvement in Afghanistan would only deepen and last for a decade.

Within months of his disastrous trip to Africa, Ali would lose his belt to Larry Holmes, spelling the near-end of his boxing career. At the same time, Carter would lose his 2nd bid for the White House, ending his political life.

A bizarre chapter in American history, 1980 in sports and politics left no champions, just a bitter legacy.