The Best of Frenemies

Rivals since college, Magic and Bird strike a lifelong friendship 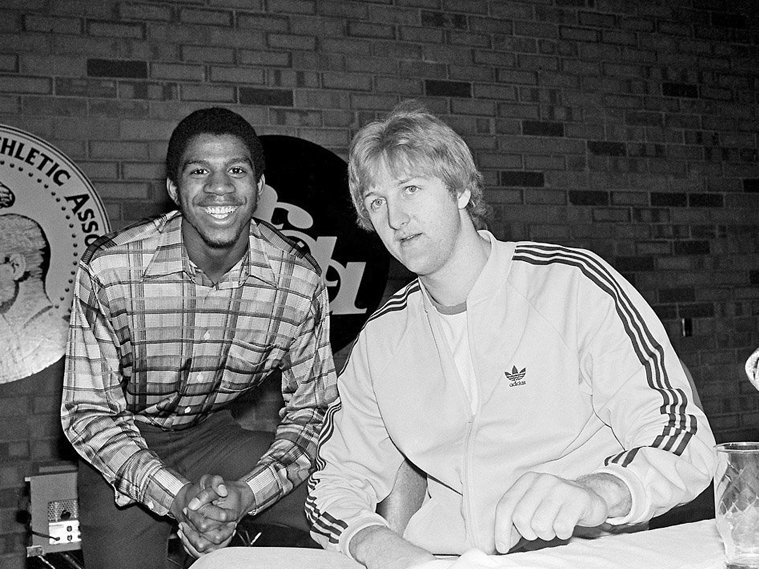 Magic Johnson (left) and Larry Bird with the press before the 1979 NCAA Finals. Their storied rivalry in the NBA would begin at that game, the most watched in the history of college basketball.
Posted Saturday, March 2, 2019 8:00 am

One of the most storied rivalries in sports history was even recreated on Broadway in a show called “Magic/Bird”.

Beginning in the late 1970’s, Magic Johnson and Larry Bird did legendary battles on the basketball court, electrifying the NCAA and revitalizing a beleaguered NBA.

Later on, the two would also forge a close friendship that only added to their lore.

Before they were enemies, they were All-American teammates for 5 days, thrust against teams from the Soviet Union, Cuba and Yugoslavia at the 1978 World Invitational Tournament.

Magic and Bird were second-stringers on a U.S. squad that favored Kentucky players. Few predicted they would soon explode as stars and rivals.

A dazzling African-American hoopster with an infectious smile and an outgoing personality, Earvin Johnson, Jr. got his “Magic” nickname from a local reporter who was enthralled by his dynamic skills.

His future nemesis couldn’t be any different except for displaying the same passion for winning on the court. A quiet white kid from rural Indiana, Bird was slow and flat-footed, but a tough competitor and an undeniable shooting wizard.

They were now facing each other at the 1979 NCAA championship, Magic as a sophomore point guard for Michigan State and Bird as a senior forward for Indiana State.

Neither team had ever been to the Finals and the showdown was set for what would become the most watched college game of all time. The duo had lit up ‘March Madness’, which turned into the hottest sports property for CBS.

At the Special Events Center in Salt Lake City, Utah, the Spartans defeated the Sycamores 75-64 for the national title. After leading his team to a perfect 33-0 season, Bird couldn’t produce his famed distance shots and ended up succumbing to Magic, who picked up the Most Outstanding Player award for the series.

Their feud had begun and it would carry over into the NBA.

With Bird already selected by the Boston Celtics and Magic joining the Los Angeles Lakers, it was now East versus West.

The Celtics and Lakers weren’t mutual strangers either, as the two coastal franchises confronted each other six times at the finals during their dynastic heydays of the 1960’s.

But times were different now. Boston was mired in a slump and LA hadn’t won a Conference title since 1973. Furthermore, a falling fan base and disenchantment with a league that was seen as drug-infused was eroding the reputation of professional basketball.

Emerging from a thriving college sports scene, Magic and Bird would reenergize the crumbling NBA.

The rookies went to work immediately. In their first year, Magic averaged 18 ppg, 7.7 rpg and 7.3 apg; Bird posted 21.3 ppg, 10.4 rpg and 4.5 apg. The kid from French Lick, Indiana helped lift his team’s total victories by 32 games over the prior season and was named Rookie of The Year.

Magic and the Lakers went all the way to clinch the title and in just 4 years, the young prodigy from Lansing, Michigan captured three coveted crowns: state high school, NCAA, and NBA.

Their basketball journeys intertwined, Magic and Bird became darlings of the sports media who exploited their rivalry to boost ratings. The two went head-to-head three times for the trophy- ‘84, ’85, ’87- playing for the same teams.

After winning the first championship with the Celtics, Bird felt vindicated from his loss in college. But Magic and the Lakers would claim the other two.

But race was never an issue for the two luminary athletes who just wanted to play basketball and win games. Growing up poor, both Bird and Magic overcame tremendous odds of avoiding the scourges of drugs and racism. They carried those disciplines into their adult lives.

In the summer of 1985, Converse featured Bird and Magic in a sneaker commercial that was shot outside the home of Bird’s mother in Indiana. Skeptical at first, they ended up bonding over lunch and forming a life-long friendship.

On and off the court, there was a yin-yang mystique about Bird and Magic. They came from different worlds and played a different game, but those aspects only served to enhance the sport’s appeal and make the game what it is today.

IF YOU ENJOY OUR CONTENT, PLEASE CONSIDER A VOLUNTARY DONATION TO SUPPORT OUR WRITING AND JOURNALISTIC EFFORTS.