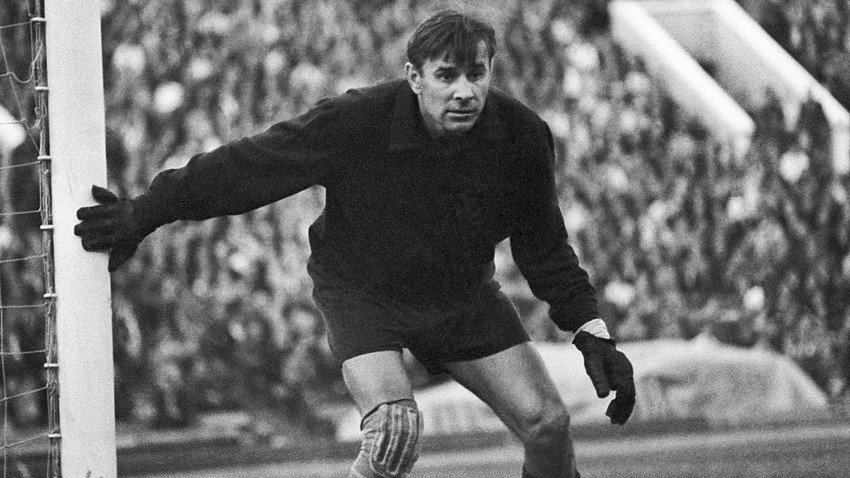 If Pele was soccer’s greatest striker of the 20th century, then Lev Yashin was its greatest goal tender.

An imposing athletic figure who guarded the net for over 20 years, Yashin didn’t just block shots, he revolutionized the goal keeper’s position and in the Russian psyche, he protected the ‘border’.

Nicknamed the “Black Spider” after the color of his uniform and his ability to stop incoming ball missiles from all angles, the sports icon saved over 150 penalty kicks and turned in 270 clean sheets, ahead of any other professional goalie.

BUY on Amazon- The Ball is Round: A Global History of Soccer

The Soviet stopper was so compulsive about defending the net that he remarked, “What kind of a goalkeeper is the one who is not tormented by the goal he has allowed…he must be tormented!”

Born in Moscow in 1929 to a family of industrial workers, the future soccer star labored as a youth in a bullet plant during WWII. He was spotted playing for a factory team and eventually made his way to Dynamo Moscow in 1950, staying with the club his entire career. His ascent coincided with the game’s golden era and the USSR’s supremacy in international sports.

Dynamo were the first Soviet soccer team to tour the West. In 1945, in a brief spirit of East-West camaraderie before the cold war set in, Dynamo was invited by Britain’s soccer authorities to play a series of friendlies against Chelsea, Cardiff, Arsenal and Rangers.

In packed stadiums in front of cheering crowds, the Russians came away with notable finishes, either tying or beating their hosts.

Do you shop on Amazon? Support us at SPORTS HISTORY WEEKLY by clicking for ANY of your purchase needs

Their celebrated goal keeper, Alexei “Tiger” Khomich, became mentor to Yashin who later replaced him at Dynamo. In post-war Soviet Russia, success in sports was inextricably tied to the ideals of the revolution and the strength of communism. But in the case of Yashin, the Black Spider would enjoy an even greater dimension of iconic-worship.

While strikers and midfielders were the natural heroes for most soccer-loving nations, the role of a goalie in the Russian imagination had special significance.

The keeper was seen by fans and romanticized by the country’s poets and artists as the ultimate protector and last line of defense, a metaphor to the country’s war-ravaged border history.

As a youngster, Yashin himself and his family were forced to flee their Moscow home when the German army was fast encroaching.

On the field, Yashin’s sense of anticipation and positional play between the posts was unmatched. He had explosive speed, vertical leap, and great courage, all of which he finessed with athletic elegance.

He was the first goalie to punch out cross shots rather than try to catch them and was also one of the pioneers of releasing the ball quickly to initiate a counter-attack, instead of just kicking down-field.

Most notably, the Russian stalwart displayed a penchant for leadership at a time when keepers stood around passively until called into action. The 6’2 goalie redefined his position by assuming a proactive role in the game, imposing authority on the defensive line and widening the team’s tactical potential.

Facing the legends of the day, he commanded respect from the likes of Brazil’s Pele, Portugal’s Eusebio and Hungary’s Ferenc Puskas.

Placing the ball past the Black Spider was even regarded as a badge of honor. English forward Tom Finney recalls how he used his weaker foot in a penalty at the 1958 World Cup knowing that the Russian had studied his shots before. “You can imagine how I felt, but I scored! I had outfoxed the great Yashin!”

The Moscow native was part of the Soviet soccer team that clinched gold at the 1956 Olympics in Melbourne, Australia. At the final, he walked off the pitch with a clean sheet after his squad defeated Yugoslavia 1-0 with a goal in the 48th minute.

On their trip back home, the Russians took a long celebratory train ride from Vladivostok across the vast stretches of their country, displaying their medals to proud adulating fans.

Four years later in 1960, the Soviets won the inaugural staging of what would later become the European Championship. At the semi-finals, Yashin saved a penalty shot against Czechoslovakia whom the Soviets ended up sweeping 3-0.

Facing Yugoslavia at the final, he rose to the occasion by blocking numerous goal opportunities, which contributed to his team’s 2-1 victory. In 1964, they reached the final again but lost to Spain 2-1.

Do you shop on Amazon? Support us at SPORTS HISTORY WEEKLY by clicking for for ANY of your purchase needs

For several years, Yashin’s illuminating performance on the field landed him on the short list of the Ballon d’Or, the prestigious award given to the best soccer player by a vote of journalists. He was 5th in line in 1956 and 1960, 4th in 1961, and then finally won in 1963.

To this day, he remains the only goalie who ever hoisted the trophy. From 1994-2006, FIFA also presented the ‘Yashin Award’ (renamed Golden Glove) to the best goalie in a World Cup tournament.

Despite his accomplishments in the box, soccer’s most coveted prize, the World Cup, eluded him. Yashin made three Cup appearances, reaching the quarterfinals in 1958 and 1962, and the semifinals in 1966 where he fell to Franz Beckenbauer and the Germans.

Nevertheless, the goal master was credited with completing 4 clean sheets out of the 12 games he played and to date, the 1966 tournament in England remains Russia’s best showing at a World Cup.

But stardom also had its setbacks and supporters at home weren’t sympathetic when their goalie let the enemy breach the border. In Chile in 1962, Yashin suffered two concussions and in one match against Colombia, allowed a couple of soft goals that included a direct corner kick into the net.

He was scapegoated for the team’s quarterfinal exit from the tournament, which sent him into the most bitter period of his soccer career.

Yashin was 41 when he stopped playing. He took up fishing and spent time with his family and friends, but poor health caught up with him. He suffered two heart attacks, two strokes, and in a cruel twist of fate, his leg was amputated after it developed a blood clot.

BUY on Amazon- How Soccer Explains the World: An Unlikely Theory of Globalization

In 1989, Dynamo Moscow hosted a special match to celebrate Yashin’s 60th birthday. Eusebio, Beckenbauer, and England’s World Cup champion, Bobby Charleton, were among the guests who came to play and honor their former adversary on the field.

As Yashin sat and watched with his wife at his side, there was a sense of closure for man and country. Five months later, Yashin died and the following year the Soviet Union collapsed.