As One Boxing Era Ends, Another Begins 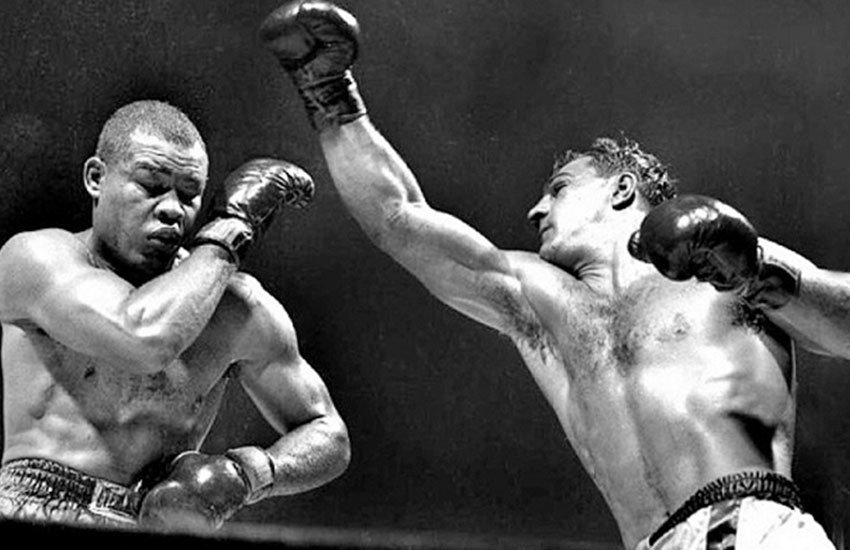 Joe Louis (left) and Rocky Marciano at the fight in Madison Square Garden that saw the end of one boxing legend and the beginning of another (October 26, 1951).
Posted Sunday, August 8, 2021 8:21 am

Along with an electrified crowd, they were all present at the highly-anticipated fight between former heavyweight champion, Joe Louis, and a rough-hewn pugilist named Rocky Marciano.

For some time, Al Weill, MSG’s matchmaker and Marciano’s shadow manager, resisted throwing his fighter in the ring with Joe Louis. A couple of years earlier, he was offered $3,000 for an exhibition match, but the notorious operator knew Marciano wasn’t ready.

Muhammad Ali- An Iconic Photo that Belies the Real Story

Weill was still reluctant to arrange a Louis-Marciano fight as a tune-up to help sharpen Louis for his title rematch with Ezzard Charles. But in the summer of 1951, when he noticed that Louis’ reflexes had slowed down at the Jimmy Bivins fight, he decided it was time.

The ring encounter was originally scheduled outdoors at the Polo Grounds, home of the New York Giants baseball team. But the Giants’ unexpected pennant run, highlighted by Bobby Thompson’s ‘Shot Heard Round the World’ 3-run homer, pushed the fight to October 26, 1951 at MSG.

Joe Louis was Rocky’s boyhood hero. The Italian-American kid from Brockton, Massachusetts was 14 years old when Louis knocked out Max Schmeling at Yankee Stadium on June 22, 1938, a fight that symbolized the rising tensions between the U.S. and Nazi Germany.

Floyd Patterson- A Good Guy in a Mean Sport

Born Rocco Francis Marchegiano to a working-class family, Rocky grew up in a time and place where gloved duels settled neighborhood scores. He was drafted into the army during WWII and while stationed in Britain, he missed the D-day invasion after being thrown in jail for roughing up two English civilians.

More of a barroom brawler than a tactical boxer, Marciano was a relentless fighter who packed a formidable punch and was gifted with exceptional stamina. His trainer, Charlie Goldman, nicknamed his thunderous punch the “Suzie Q”. The New York Times called it “…just about the deadliest left hook in the business”.

Marciano turned pro in 1948 and was undefeated at 37-0 when he took on the Brown Bomber. His largest purse until then was $9,900 on a controversial win against Roland La Starza a year and half earlier. He was now set to fight an American icon and when it was all over, he would walk away with $50,000 and a shot at the title.

A beloved figure, Louis appealed to white America at a time when racism was deeply rooted across the country. Skillful inside the ring, humble and self-effacing outside it, he was seen as an American patriot. When President Roosevelt invited him to the White House before the face-off against Schmeling, FDR said, “Joe, we need muscles like yours to beat Germany”.

Louis rose from the ghetto of Detroit to win the 1934 Golden Gloves and take the world heavyweight title in 1937 after an 8th round knockout of James Braddock. He defended his crown successfully for 26 consecutive fights and called it quits in March of 1949. But the champ found himself financially broke and he was back in the ring the following year.

The IRS was after Louis for $500,000 in back taxes and he had no choice but to come out of retirement. He fought Ezzard Charles on September 27, 1950 and lost his belt. The following summer, Charles succumbed to Jersey Joe Walcott, but Walcott only wanted a rematch against Charles. That set Louis and Marciano on a collision course for the ultimate title shot against the winner of that battle.

“This is the last guy on earth I want to fight”, said Marciano of his boxing idol. Rocky’s mother, Lena, was distressed as well when she heard that her son was pitted against a bigger and more experienced ring master. But there was no other path to the championship.

Louis was 66-2 when he stepped into the ring against Marciano, including 8 straight wins since his comeback loss to Charles. Standing 6’2” with a bald spot on his head, the 37-year-old legend had a 4-inch height advantage over his opponent who was 9 years his junior. Although Louis was a 6 1/2-to-5 favorite, the odds were the lowest of his career.

As the bell rang to open the fight, Marciano moved towards his adversary to work the inside. The 1st round ended with Rocky connecting an overhand right behind Louis’ left ear, which required an ice bag when both boxers retreated to their corners.

The next rounds saw Marciano renew his attacks, but his wild swings were pushing air and missing their targets. Louis was moving well and keeping his rival at bay with his long jabs. A series of punches then bloodied Rocky’s nose and opened cuts above both eyes.

But by the 6th round, fatigue was setting in as Louis’ legs seemed to abandon him and his reflexes were getting weaker and slower. A hard right, followed by a hook, and then another right in the chin sent Louis wobbling. A counter punch that caught Rocky’s right jaw was straight on but hardly fazed the Brockton slugger.

The final kill came in the 8th round. A left hook to Louis’ jaw sprawled him on the canvas. Rising over one knee, he came up on the count of seven to resume the fight. But a barrage of punches to the stomach and head forced him against the ropes. A straight right to the face then drove him back through the barriers, with only one leg still inside. It was all over.

Ali versus Inoki- When Ali Took on a Wrestler

Feeling sorrow for his boyhood hero, Marciano approached Louis after he was helped up and said, “I’m sorry, Joe, I’m sorry it had to be me.” The former heavyweight champ replied, “You don’t have to be sorry. You licked me fair and square.”

Spectators at MSG witnessed the end of one of the greatest boxing careers in the history of the sport. It was the last professional bout for a fisticuffs legend, who ended his fighting days with a record of 66-3, including 52 knockouts.

Marciano was hailed as the new uncrowned champion, but he would go on to wear that crown less than a year later after defeating Walcott with a knockout in the 13th round. Just 4 years later, the brawler from the streets of Brockton became the only heavyweight boxer to retire undefeated with a record of 49-0, including 43 knockouts.

Red Smith, one of the country’s most respected sports columnists and future Pulitzer Prize winner, wrote the following day about the Louis-Marciano fight in the New York Herald Tribune: “An old man’s dream ended. A young man’s vision of the future opened wide. Young men have vision, old men have dreams. But the place for old men to dream is beside the fire.”