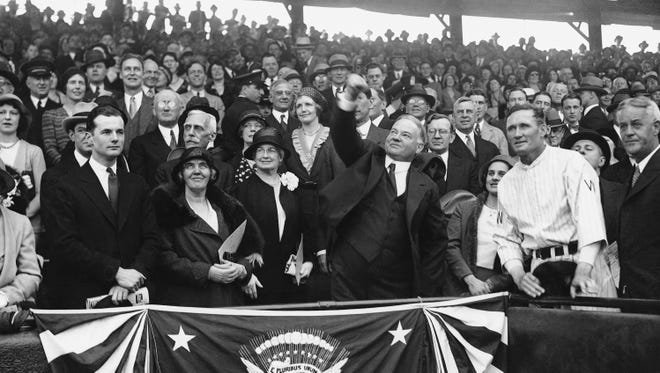 President Herbert Hoover throwing the ceremonial first pitch on April 14, 1931 in a game between the Washington Senators and Philadelphia Athletics. To his left is former pitcher and now Senators manager, Walter Johnson. A lover of baseball, Hoover attended more MLB games than any other American President.
Posted Sunday, October 11, 2020 8:00 am
By Hal Wert

For Herbert Hoover, the 31st President of the United States who served from 1929-1932, nothing compared to being at the ballpark. His record of sitting behind the diamond and rooting for a team is unmatched by any other elected executive who occupied the White House.

Blamed for the Great Depression of the 1930s, rightly or wrongly, the one-term President saw baseball as a metaphor for what he admired most in American life- a competitive arena that provided an opportunity for talent and ambition to succeed through hard work.

Hoover was elected President in 1928 in a landslide victory over Al Smith. The following spring, he hurled the ceremonial first pitch to open the baseball season. That inaugural day at Washington, DC’s Griffith Stadium saw the Philadelphia Athletics whip the Senators 14-3.

For the next 3 years, the man at 1600 Pennsylvania Avenue would launch the first ball to kick off the season for the home team. Perhaps it was the atmosphere at Griffith Stadium, the crack of the bat, the hawkers selling peanuts, or just the temporary escape from the ever-increasing demands of his office. But for whatever reason, Hoover’s nostalgic fondness for America’s game was reignited.

Brought up in a Quaker household and orphaned at the age of 9, the future Commander-in-Chief wasn’t much of a ball player but he loved the sport. His first taste of playing sandlot baseball in his hometown of West Branch, Iowa was short-lived since he was soon packed off to Oregon to live with his uncle.

As a sophomore at Stanford University, he made the team but after suffering a thumb injury he decided to become the team’s business manager. Revealing the beginnings of his unbridled ambitions, Hoover challenged a San Francisco professional ball club to a header, which was thankfully called off at darkness after the hapless college amateurs trailed 30-0.

Do you shop on Amazon? Support us at SPORTS HISTORY WEEKLY by clicking here and surfing for ANY of your Amazon products

In October of 1929, Hoover traveled to Philadelphia to watch the first game of the World Series between the Athletics and the Chicago Cubs. Will Rogers in his weekly syndicated column wrote: “That was a mighty fine thing of the President and Mrs. Hoover, going clear to Philadelphia to see a baseball game. Baseball is still and always will be our national game.”

Attending the 5th and final game, he received a telegram from Cubs fan Bud Garrett: “If you do any rooting today…please root for the Cubs as I have my last five spot on them.” Within days, the bottom fell out of the New York stock market and the nation plunged into the Great Depression.

Even amidst economic turbulence, Hoover’s name didn’t stray too far from baseball. In March of 1930, Babe Ruth signed an $80,000 contract with the New York Yankees, which made him the highest-paid player of all time. Asked by a reporter what he thought of making more than the President of the United States, the Babe cracked: “Why not? I had a better year than he did.”

In fact, and largely unknown to the public, Hoover donated a fifth of his salary to charity. With the economy front and center, the President still attended a game in July and was back in Philadelphia for Game 1 of the World Series. For the second year in a row, Connie Mack’s Athletics won the Fall Classic by defeating the St. Louis Cardinals 4-2.

The following year, with the Senators’ former star pitcher and now manager Walter Johnson by his side, Hoover threw out the first pitch. Once again, the World Series landed in Philadelphia and the President, eager to attend, arranged to see Game 3. He reasoned his presence might help to lift the spirits of those “suffering from a severe attack of jitters.”

The economy was flat and the mood of country was beyond jitters. It ranged from dour, to bitter, to desperate. The prohibition of alcohol, now in its 11th year of federal law, was also testing the country’s frustration. As Hoover was exiting the stadium, the crowd turned against him with a chorus of boos and a loud boisterous drumbeat chant, “WE WANT BEER, WE WANT BEER!”

Hoover lost the 1932 election to Franklin Roosevelt, who swept the popular vote on a wave of widespread business failures and high unemployment. He left office under a cloud, his reputation in tatters, and was held responsible for the Great Depression. It was some time before he realized that he owned it—an albatross around his neck.

Do you shop on Amazon? Support us at SPORTS HISTORY WEEKLY and click here to surf for ANY of your Amazon products

Ironically, it was he that tagged the slump a depression. His wife, Lou Henry, wrote to their son Allen that his father was “utterly brain tired,” that his presidency had been “a long dull deadly grind.” She opined, “…it will be a slow process getting back to normal,” much like “recovering from an illness.”

Out of office, Hoover played solitaire, read stacks of Eastern newspapers, railed against Roosevelt and the New Deal, attempted to fish, and drove eight thousand miles throughout the West in his V-16 Cadillac.

In 1936, he returned to the diamond for Game 5 of the World Series, a ten-inning affair that saw the New York Giants defeat the New York Yankees 5-4. The following day, he traveled across Central Park to the Polo Grounds to watch the Yankees clinch the championship 13-5 in the 6th and final game.

1937 witnessed another subway series with Hoover in attendance at the Bronx ballpark. For half-a-dozen years, the former President had stayed for stretches of time at the Waldorf Astoria and in 1940, he permanently moved into a ten-room apartment in the luxurious building. He was now a full time Big Apple resident, enjoying the pleasures of America’s favorite pastime during one of baseball’s greatest eras.

From 1949-1960, Hoover sat in twenty-two World Series games and two opening day games. Baseball recognized his love for the sport and on August 8, 1959 at a Yankees Old Timers’ contest, they honored him with the same first pitch he had done on the Senators’ opening day for all four years of his presidency.

He was invited back the following season and under the gaze of Joe DiMaggio, Red Ruffing, and Cleveland Indians pitching ace, Bob Feller, the 76-year old hurled the ball far enough that it bounced off home plate. That year, Hoover made his final ballpark appearance at Game 3 of the World Series, which saw the Yankees wax the Pittsburgh Pirates 10-0.

As an octogenarian looking back at the game he loved, Hoover observed, “I pride myself on being one of the oldest fans. I can certainly count up about seventy years of devotion.” “Baseball", he concluded, “is the greatest of all team sports.”

Hal Wert is Professor Emeritus at Kansas City Art Institute. He is the author of “Hoover The Fishing President: Portrait of the Private Man and His Life Outdoors”. The book is available for sale on our website.