Farewell to a Harlem Globetrotter 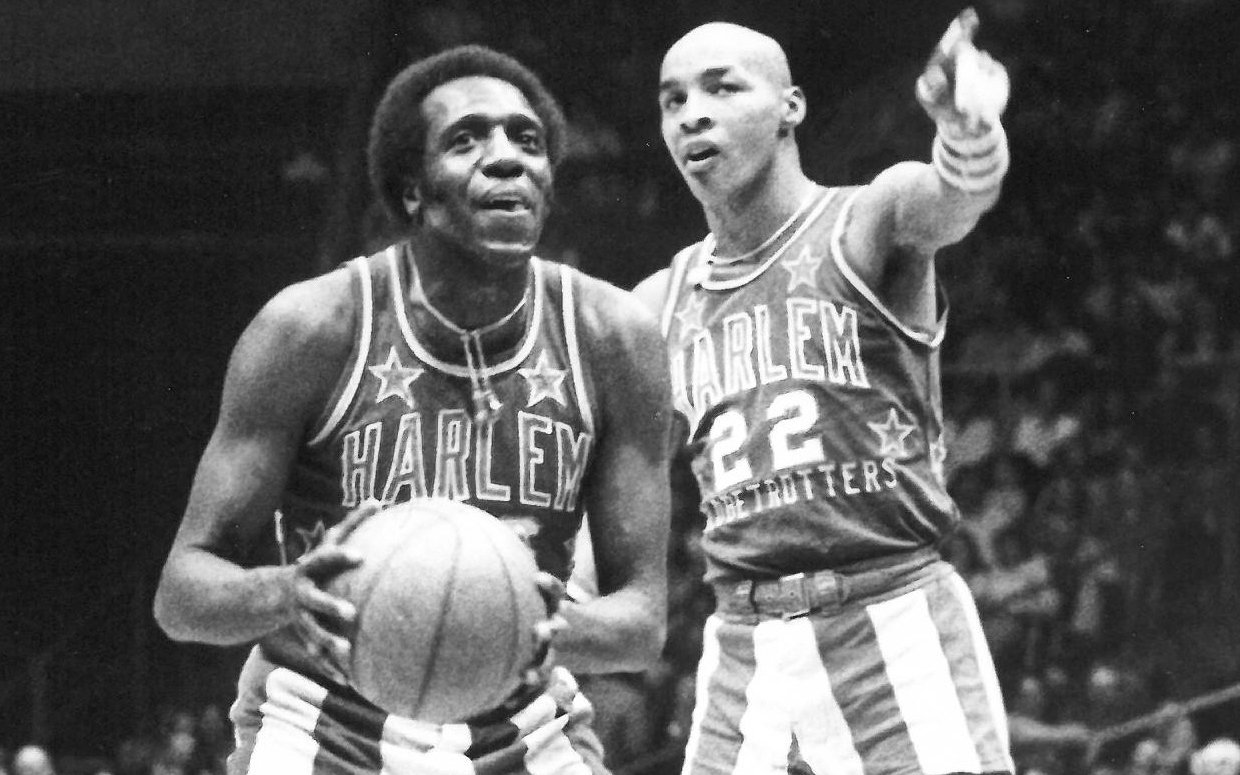 Curly Neal (right) who died on March 26, 2020, and Meadowlark Lemon (left) who died in 2015, performing one of their game antics as members of the Harlem Globetrotters. They belonged to the last generation of Globetrotters who showcased basketball wizardry around the world before the NBA took off in the 1980s.
Posted Sunday, April 12, 2020 8:00 am

He belonged to the last generation of Harlem Globetrotters that owned the basketball brand. Curly Neal, who died on March 26 at the age of 77, was part of a legendary hoops squad that was synonymous with the sport prior to the 1980s explosion of the NBA.

Before there was a Michael Jordan, or a Magic Johnson to dazzle the world with breathtaking air leaps and brilliant ball handling skills, there was Curly Neal and the rest of the Harlem Globetrotters.

These court masters elevated the sport to a new art form, inspiring today’s slam dunks and behind-the-back passes, all the while delighting millions of people around the world.

Born in Charlotte, North Carolina, Frederick “Curly” Neal joined the team in 1963 out of Johnson C. Smith University, an historically black college located in his home state. The 6’1” point guard averaged 23.1 points a game during his four years at JCS and was named All-Central Intercollegiate Athletic Association guard.

He was invited by Abe Saperstein, founder and owner of the Globetrotters, to try out for the team at their camp in Chicago. Neal became one of the lucky 5 players selected from the 125 who made the trip from across the country with big dreams of landing on the Globetrotters roster.

With his signature shaved head and infectious good-natured smile, Neal spent the next 22 years performing basketball theatrics with legends Marques Haynes, Meadowlark Lemon, Hubert “Geese” Ausbie, and many others.

The Harlem Globetrotters were neither from Harlem, nor were they globe travelers in the early decades. They started out in the 1920s as a group of high school athletes from the south side of Chicago who played exhibition games at the Savoy Ballroom to bolster sagging attendance.

Abe Saperstein, a sports booking agent from the north side of town, took over the team as manager and occasional on-court substitute. Barely 5’3”, the athletic but squat Saperstein who aspired to own a professional basketball franchise proved to be a savvy businessman and skilled promoter.

In 1929, he added flair to the team’s image by naming them the New York Harlem Globetrotters. As they barnstormed the back roads of the Midwest and northern plains, sporting halls and gyms instantly knew the makeup of the players when they saw the word “Harlem” on the schedule.

Shut out from most hotels in a racially-segregated America, the team slept in any shelter they could find on the road, including animal barns and even in their car.

The Great Depression made it that much harder to earn money playing games and they often settled for small sums that were further split with Saperstein, who doubled and tripled as coach, public relations man, and driver for the touring squad.

At the time, the Globetrotters were a serious, competitive basketball team and their transition to on-court antics was still years away. In 1940, they won the World Professional Basketball Tournament, an annual invitational tournament sponsored by the Chicago Herald American.

They were undeniably a talented group of athletes but the young men from Chicago were still kept out of the national leagues due to the color of their skin.

The entertainment side of the Globetrotters’ game was born out of a need for players to rest, since they played every night to the point of exhaustion and Saperstein couldn’t afford to hire more than 5 members for the squad.

The ball wizardry began with dribbling routines that piqued the interest of crowds and eventually morphed into laughter-inducing clown acts. Reece “Goose” Tatum, who joined the Harlem Globetrotters in 1941, weaved comic routines into the games and is credited with being the original ‘Clown Prince’.

Marques Haynes came on board several years later and was noted for his quick-dribbling showmanship tricks. But it wasn’t until the team squared off against the Minnesota Lakers (now the Los Angeles Lakers) that the Globetrotters were transformed into a national headline.

Saperstein’s all-black squad ended up defeating the country’s best all-white team 61-59 with a dramatic game-winning buzzer shot. Ironically, it was the beginning of the undoing of the Harlem Globetrotters as a big-league wannabe team.

Less than a year earlier, Jackie Robinson broke the color barrier in major league baseball and by 1950, blacks were being recruited into the NBA. Among the first African-Americans to make the cut were Nat “Sweetwater” Clifton (NY Nicks) and Chuck Cooper (Boston Celtics), both ex-Globetrotters.

Saperstein was losing talent to integrated teams and he needed a new strategy. He began to turn the Harlem Globetrotters into a traveling entertainment troupe.

‘Sweet Georgia Brown’, a jazzy whistle jingle that was originally recorded with lyrics in 1925, became the Globetrotters’ trademark musical tune. They traveled extensively, playing exhibition games and entertaining audiences of all types and on every continent.

By the time Curly Neal became part of the magic circle, the Harlem Globetrotters were already a quintessential American institution, projecting a brand to the world like Coca Cola, Chevrolet, or Elvis Presley. They had enchanted crowds in Europe, played in front of the pope in Rome, entertained members of the Japanese royal family, and even warmed up a cold war crowd in the Soviet Union.

In 1959, with Wilt Chamberlain in the lineup, the Globetrotters were invited to play 9 games at Moscow’s Lenin Central Stadium, Russia’s biggest sports facility. Bringing basketball goodwill to spectators on the other side of the iron curtain, the dribbling-passing-shooting geniuses even met Premier Nikita Krushchev and received the Athletic Order of Lenin medal.

Along with Marques Hayes and Meadowlark Lemon, both of whom died in 2015, Curly Neal was one of the familiar faces of the Globetrotters during the team’s heydays in the 1970s.

They appeared in a variety of cartoons and television programs, bringing laughter and joy to millions of people around the world and cementing their image in popular culture.

All gone now, their jerseys ceremoniously retired, Neal and his teammates will always be remembered as one of the greatest crop of Globetrotters who made basketball magic.