A Preacher Boxer Makes A Comeback

Kneeling for a prayer in the boxing ring 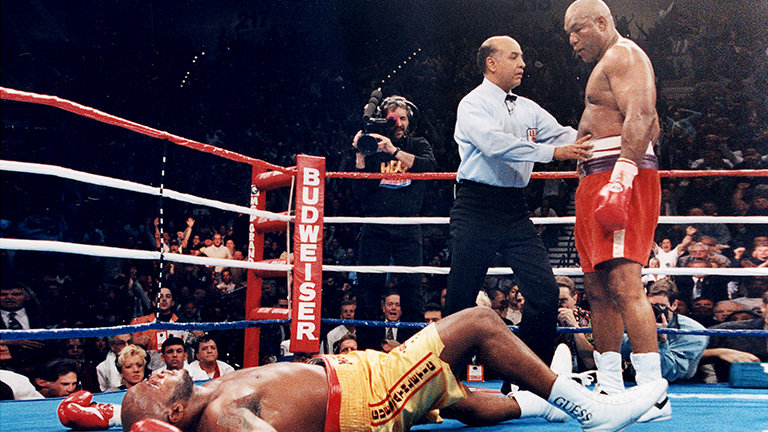 George Foreman standing over Michael Moorer at his comeback match for the world heavyweight title on November 5th, 1994.
Posted Sunday, November 10, 2019 8:00 am

Twenty-five years ago, George Foreman returned to the boxing ring to win his second world heavyweight title, becoming the oldest fighter to do so at the age of 45.

After knocking out Michael Moorer in the tenth round of a widely-touted comeback challenge, the seasoned pugilist who was 19 years older than his opponent kneeled down in the corner for a thankful prayer.

Foreman was no longer the angry, unfettered fighter of his youthful days, but a mature and wise ordained minister. In later life, ordinary folks came to know him as the smiling, amiable pitchman for the George Foreman Grill.  But boxing fans remember him as a two-time world heavyweight champion and a gold medalist at the 1968 Olympics.

For the fisticuff purists, Foreman stands in a class of his own, having regained his title 20 years after first claiming it in 1973 from Joe Frazier. Less than two years later, he would lose his belt to Muhammad Ali in the historic “Rumble In The Jungle” fight extravaganza that took place in Kinshasa, Zaire (today’s Congo).

His epic encounter with Ali in Africa turned out to be his first professional career loss in the ring. What’s more, it was a monumental upset that was witnessed by a TV audience estimated at 1 billion viewers, the biggest live-television event at the time.

Ali versus Liston II- Was it a knockout, or a dive?

A 4-to-1 underdog, Ali used his rope-a-dope tactics to tire out his indomitable rival and with a flurry of combination punches and a final blow to the face, sent him to the canvas in the 8th round.

Foreman emerged from the “Rumble in The Jungle” bout a dispirited man whose inner core was knocked out. Despite the enormous media coverage that surrounded the event, the fight that became a real turning point in his personal life would take place a few years later.

It was March 17, 1977 and 28-year old “Big" George was facing Jimmy Young at the Roberto Clemente Coliseum in San Juan, Puerto Rico. Fatigue took its toll in the hot and humid arena and while Foreman unleashed his relentless power punches, he ultimately went out in the 12th round and lost by unanimous decision.

Suffering from severe exhaustion and heatstroke in the dressing room, Foreman collapsed into deep spiritual and emotional despair as he felt himself teetering on the edge of death. It was at that moment that the 6’3”, 220 lb. Foreman experienced an epiphany that lifted him from the abyss and forever changed his life.

Foreman believed in God, but he was never a religious man. Growing up in Houston’s 5th Ward, known as “Bloody 5th”, his formative years saw the familiar teenage exploits of a troubled youth. Thefts, muggings and brawls kept him on the street and away from school.

At 15, he dropped out after failing most of his classes but then joined the Job Corp, a federal work program that would inject a sense of discipline and confidence into the young man. He picked up boxing at the Corp and later joined the amateur circuit, winning the amateur national boxing title in 1968 and capturing gold the same year in the heavyweight division at the Summer Olympics in Mexico City, Mexico.

Turning pro in 1969, Foreman befriended former champion Sonny Liston from whom he copied a thuggish and steely facial appearance. He ran up a string of victories for the next half dozen years and was 45-2 with 41 knockouts by the time the battle with Young was over.

Returning to Texas after his experience in Puerto Rico, he became a born-again Christian and retired from boxing at the age of 28. A year after embracing God and the bible, he became an ordained minister. He shaved his head, gave up his expensive toys and luxurious lifestyle, and abandoned his physical regimen.

Stripping away the cold demeanor that he picked up from Liston, Foreman started to smile. He found peace and traveled the world as an evangelist. Foreman even preached on the same streets where he ran afoul of the law as a teenager.

In 1981, he set up his own Church in Houston called Humble. Two years later, he founded the George Foreman Youth and Community Center, which provides sports and learning facilities to underprivileged kids. Foreman’s family also grew after he went through five marriages and produced 12 children.

Ten years following his spiritual transformation, Foreman was running out of money for his family and his charity organization. In 1987, he was back in the ring for the second phase of his boxing career.

Skeptics noted that the man of the cloth was now too gentle, too humble and too out of shape to take on serious fighting again. Weighing 267 lbs. in his first comeback encounter against Steve Zouski, Foreman had visibly lost some of his footwork balance and his combination punches were also slower.

Rocky Marciano- As One Boxing Era Ends, Another Begins

Nevertheless, he still managed to pack lethal blows against his opponents and he ended up winning all five fights of that year. Foreman’s winning streak continued uninterrupted even after he turned 40; he knocked out Gerry Cooney 5 days following his 41st birthday. He was finally stopped in 1991 when a younger, fitter Evander Holyfield beat him for the world title in a unanimous vote.

Undeterred, the hulking preacher kept fighting and hoping for a second shot at the title. Foreman already built his celebrity status outside the ring with product endorsements and television programs, but he wanted to be a ring contender and not just a sideshow.

After Michael Moorer dethroned Evander Holyfield for the world title, the Texas native found himself with a chance to reclaim the prize. Foreman was unranked, but his high public profile ensured a popular, money-making boxing event.

The date was set for November 5th, 1994 in Las Vegas, Nevada. Before stepping inside the ropes, Foreman asked for a prayer in the dressing room. It was answered.