Nothing defined the golden age of auto racing more than the ear-piercing, tire-screeching, high-performance competition between Ford and Ferrari. 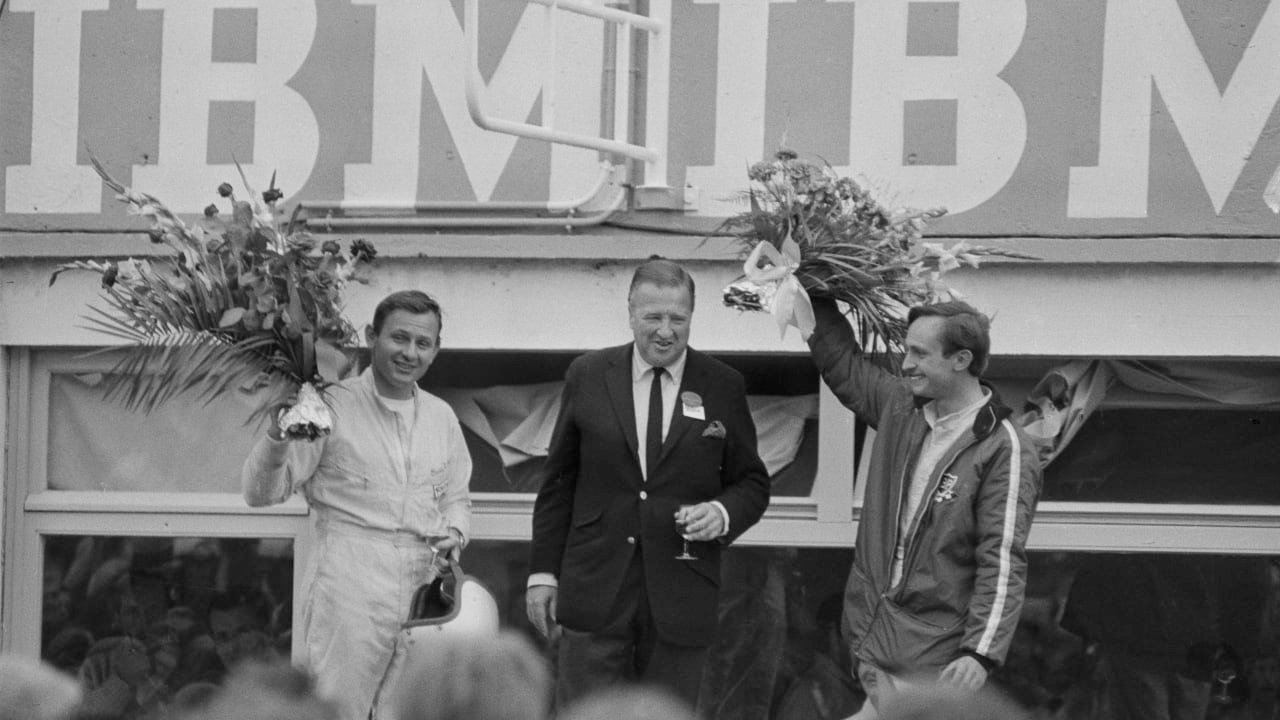 Henry Ford II standing center with Bruce McLaren (left) and Chris Amon (right), winners of the 1966 24 Hours of Le Mans. The victory ended Ferrari's long-running dominance of the endurance race and Ford's personal quest to dispatch the Italian company on their own European turf.
Posted Sunday, November 15, 2020 8:00 am

Nothing defined the golden age of auto racing more than the ear-piercing, tire-screeching, high-performance competition between Ford and Ferrari.

In 1963, Henry Ford II and Enzo Ferrari were in advanced talks for a Trans-Atlantic merger when the deal fell apart in the 11th hour. Almost immediately, the two industrial titans unleashed a war of egos that played out on the racing circuits of North America and Europe.

It culminated 3 years later when Ford finally dispatched Ferrari at the world’s premier endurance race, the 24 Hours of Le Mans.

Mid-century America saw GM, Ford and Chrysler dominate the domestic automotive market with oversized luxury tail-fins that were sold to a growing affluent public. But a younger, post-war generation was hooked on racing and hungry for speed and horse power over size and comfort.

‘Win on Sunday, sell on Monday’ became the axiom echoed in the executive corridors of Detroit’s big three car companies.

In 1953, GM launched the Corvette, which came to embody America’s sports car with its sexy European styling and agile road performance. Three years later, Corvette made its racing debut at the 1956 12 Hours of Sebring and by 1960, it became the first American vehicle to participate in the all-important 24 Hours of Le Mans.

While Ford rolled out the Thunderbird as an answer to the Corvette, the Thunderbird was still a production vehicle and the company needed a long-distance racing machine to move the sales needle.

HFII, grandson of the original founder of the company that bore his name, understood that nothing drew greater media attention and consumer interest than a strong showing at one of the prestigious endurance events.

The Wreck & Brawl that Put NASCAR on the Map

Racing was the marketing arm for a constructor, since it meant a durable engine and superior technology that would be transferred from the track to the showroom. He started eyeing Ferrari, the undisputed king of racing.

Unlike the corporate bean counters in the U.S., Enzo was a former driver with Alfa Romeo before breaking out on his own and his passion lay on the asphalt, not the assembly line.

Ford and Ferrari could not have been any different. In a dark irony, the two companies had met under very different circumstances during WWII when the Ferrari factory was bombed twice by American B-24 aircrafts that were assembled at Ford’s Willow Run plant in Michigan.

Following the war, to help finance racing in Europe, Enzo started selling limited editions of Ferrari in the U.S. after making his first victorious mark at Le Mans in 1949. His winning driver, Luigi Chinetti, set up the first North American Ferrari dealership in New York.

But Enzo’s racing exploits were burning cash and he needed a corporate partner. After spending several million dollars sending a team of accountants, engineers and lawyers to audit Ferrari’s operations, HFII made a $15 million takeover bid.

The contract was drawn and ready for signatures when the imperious Italian executive abruptly pulled out. While Enzo was given directorship of the racing division, he balked at the clause that provided Ford with decision powers over the team’s budget and over which races Ferrari could enter and with which drivers.

Disappointed and embittered, HFII was further humiliated when it was speculated that Enzo was merely dangling Ferrari in front of the Americans so he could force a buyout price from Fiat, the Italian car manufacturer.

Fiat did end up assuming a small share in Ferrari two years later and in 1969, they raised their stake to 50%.

With his board room ego bruised, the powerful American businessman proclaimed war on the competition with a stated goal of winning Le Mans and humbling Ferrari on their own European turf.

The unsigned purchase contract between Ford and Ferrari remains an historical artifact kept at Ford Archives, along with an internal document marked ‘Confidential Memo’ that was drafted just weeks after the negotiations failed.

In it, Ford outlines the formation of a new high-performance unit and as its first project “A racing GT car that will have the potential to compete successfully in major road races such as Sebring and Le Mans”.

The GT40s were assigned to Ford’s Advanced Vehicle Group in the UK. In 1964, Ford and Ferrari tussled for the first time at Le Mans’ 8.36-mile open road circuit. Despite being driven by prominent pilots Phil Hill and Bruce McLaren, all three of Ford’s cars failed miserably and none finished the 24-hour chase.

Ferrari went on to claim the event 1, 2, 3 with its P Series prototypes. Coming in 4th place was a Shelby Daytona Cobra Coupe driven by Dan Gurney and Bob Bondurant.

Dissatisfied with the GT40’s performance, HFII transferred the racing program to Caroll Shelby, a Texas-born chicken farmer-turned-racer-turned-constructer. As a driver, Shelby won the 1959 Le Mans piloting an Aston Martin. As a builder, his Shelby-American, Inc. Cobra vehicles were showing results against Ferrari’s GTs.

The following year, Ford was buoyed by its 2nd place finish at Sebring on a rain-flooded race track. Three months after that, with HFII in attendance at Le Mans for the first time, the Detroit company entered 6 vehicles to meet Ferrari’s 10.

But once again, the GT40s sub-performed with gearbox and gasket failures that left the cars dead on the track. And once again, for the 6th consecutive year, Ferrari took the checkered flag 1, 2 with its 250 LM prototypes.

After a couple of years of losses due to car breakdowns, constructors Alan Mann Racing and Holman-Moody were added to the development project. As more resources were now dedicated to beating Ferrari, the teams were tasked with reinventing the GT40 for the 1966 season.

They improved the aerodynamics, modified the body and suspension, and leveraging off their NASCAR experience, devised a quick-change brake system that could be swapped during pit stops.

HFII spared no expense, nor minced any words to realize his goal. When a Pennsylvania foundry that manufactured brake rotors couldn’t meet Ford’s rush orders, HFII cut an $8 million check and bought out the vendor.

At an executive meeting in Dearborn, Michigan, he passed out name cards to his Divisional heads with his own hand-written note in the back, “You better win- HF”.

In the end, the effort paid off.

1966 turned out to be the ‘Triple Crown’ championship in endurance racing for Ford. At the inaugural 24 Hours of Daytona, the GT40 Mark II came in 1, 2, 3 to beat out Ferrari which placed 4th with their 365 P2 car.

At Sebring, the Detroit company repeated the GT40’s triple sweep. At Le Mans, after countless man-hours and $25 million in estimated related costs, HFII was finally vindicated. The GT40s finished 1, 2, 3 and Ferrari a distant 8 and 10.

The Italian sports car lost its dominance of Le Mans and Ford went on to claim the long-distance French circuit for the next three years.

Ford was already funding Indy cars, stock cars, and drag racers and it’s not clear if showroom sales got a marginal boost after the company planted its flag in Le Mans. Nevertheless, it worked out for the man at the top and a new generation of racing vehicles.