One on One with Super Bowl Champion, Joe Theismann

The winner of Super Bowl XVII recalls his playing days 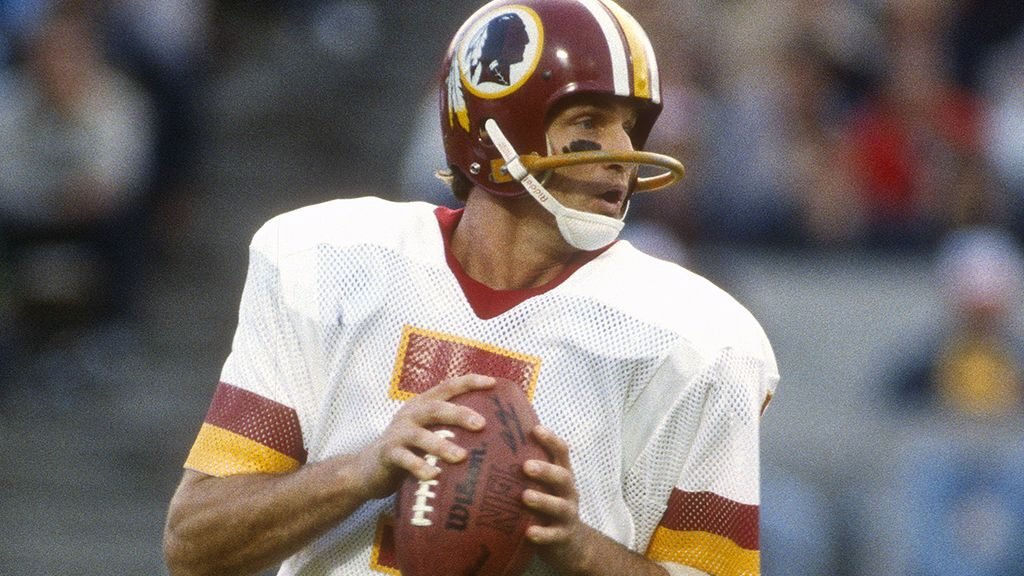 Joe Theismann in action with the Washington Redskins. One of the best quarterbacks of the 1980s, Theismann led his team to victory at Super Bowl XVII and the NFC championship the following year. A severe leg injury in 1985 put an end to his playing days, but the undeterred athlete and lover of the game went on to a successful career in broadcasting.
Posted Sunday, October 18, 2020 8:00 am

One of the greatest NFL quarterbacks of the 1980s, Joe Theismann came out of Notre Dame as a Heisman Trophy contender and an All-American in both football and academia. He spent 12 years with the Washington Redskins, winning Super Bowl XVII and  breaking  multiple franchise records.

A member of Joe Gibbs’ gridiron machine, Joe saw his playing career cut short in 1985 after breaking his leg in a severe tackling injury. Though his days on the field were over, he went on to a successful career in broadcasting with ESPN and The Sports Network.

Positive and spirited by nature, Joe has also authored books and his inspiring comment during the interview, “I like to look through the window and not through the rearview mirror”, is a life lesson for everyone.

Sports History Weekly spoke with Joe and asked him to share his memories and thoughts on the game he loves.

You were born to an Austrian father and a Hungarian mother. Growing up with European parents, what drew you to American football?

Even though my parents came from different places, I was raised here and I was fully Americanized. I played all of the American sports- baseball, football, basketball. Not many of us played soccer back then. I lived 2 blocks from my high school and football was always something that I've known.

At Notre Dame where you attended, you led the Fighting Irish to a 10-1 record and #2 ranking in the 1970 season. What are your fondest memories playing in college?

It was the innocence. We were all young kids playing a sport we loved and we didn't live in athletic dormitories, we lived with everyone else on campus. I worked hard at being a student during the week and on Saturdays everyone came out and rooted for us on the field.

I began as a punt returner and my first game was against Pittsburgh. I only started as a quarterback in the final 2 games of my sophomore year when Terry Hanratty, the quarterback at the time, injured his knee. Coach Ara Parseghian pulled me in over the other guys who were seniors.

Years later, on his 90th birthday, I asked Ara why he selected me to QB when I was only a sophomore and he said “I thought you were ready”. One of the most physical games I remember was against LSU, a very fast team on the field with players like Tommy Casanova. We beat them 3-0.

You were runner-up for the Heisman Trophy, losing it to Jim Plunkett of Stanford University. At the time, how did you feel missing out on the award?

It was an honor to be nominated, but of course it was disappointing to lose the vote. It wasn't so much me, but the campus and the people around me who created enormous expectations. It was actually the first time that a campaign was being built around the Trophy.

Roger Valdisseri who was the sports public relations person at Notre Dame changed the original pronunciation of my name from "Thees"mann to "Theis"mann, so it would rhyme with the Heisman. When I was sitting in his office and heard the nominations coming in from different sections of the country, I got a feeling of what a political candidate goes through.

In your opinion, has college football changed much over the past 50 years in terms of the players' athleticism, strategies on the field, etc.?

Today, people talk a lot about players' athleticism. But when you look at the college guys who went into professional football in the early 1970s, they were extremely athletic and many played several sports. I was a 3-sport guy and baseball was my first love. I was even drafted by the Minnesota Twins out of college.

The difference now is that you have a larger group of athletic kids because they start very young. The game was also rougher and more efficient back then, since we packed in more offensive plays. Over the years, the rules have also changed to protect players.

You also have instant replay and cable TV today. Back then, you just had the 3 television networks and Notre Dame games were replayed on Sunday mornings.

After college, you were selected by the Miami Dolphins but negotiations fell apart and you didn't join. What happened, since the Dolphins went on to post an undefeated season and clinch Super Bowls VII and VIII?

I didn't like that since the Vietnam war was still going on and I didn't know what would happen. So, I signed up with the Argonauts who also offered me a contract. I have no regrets not joining the Dolphins.

Interestingly, when you think about it, would the Dolphins have reached a perfect season and won the Super Bowl if I took over for Bob Griese as the backup quarterback instead of Earl Morrall? It's one of those 'what ifs' in history.

Before you were picked up by the Washington Redskins, you spent a couple of seasons with the Toronto Argonauts in the Canadian Football League. How was that experience?

I loved it up there and I would not have left the Canadian Football League if it weren't for the economics. We got a general manager who had been a real star with the Hamilton Tiger-Cats, the rivals to the Argonauts.

He came over and basically said that they couldn't pay because the Argonauts were cutting back. At that point, the Dolphins didn’t need me any more, so I ended up being traded to the Washington Redskins.

You won Super Bowl XVII with the Redskins in a strike-shortened season. What do you remember most about that game against Miami when you reversed a 4th quarter deficit to clinch the national championship?

Miami's defense was their killer beast. On the night before the game, Coach Gibbs held a meeting with his quarterbacks and said that if we can stay within 3-7 points of these guys then we'll have a chance to wear them down because we're bigger than they are.

In the end, we did just that. Our offensive line carried the game and we roared back with John Riggins. The scrip went exactly as Gibbs had laid it out.

Interview with Jim Kelly, Former QB with the Buffalo Bills

The following season in 1983, you won the NFC crown but then fell to the Los Angeles Raiders at Super Bowl XVIII. During those years in the 1980s, what made Joe Gibbs and the Redskins successful?

Had we won Super Bowl XVIII, we would have been considered one of the greatest teams in NFL history. We had a take-away/give-away ratio of 43, which means that we took the ball away 43x more from our opponents than we gave it away.

Joe Gibbs basically lay the foundation for the team when he took over the Redskins in 1981. It was a great, unselfish, talented group of players and Joe figured everyone's role in the team.

For example, Art Monk was used a lot to move the ball. Not everyone liked their place in the formations, but we won games. That's why Joe is in the Football Hall of Fame. He won three Super Bowls with three different quarterbacks and three different running backs.

In mid-season 1985, you suffered a horrendous, career-ending injury on the field. Everyone who watched that game still remembers the incident today. Are there any life lessons learned from such a terrible athletic accident?

You go through the emotional trauma of losing everything that meant so much to you. I went back to the practice facility 3 weeks later on crutches and Steve Bartkowski of the Atlanta Falcons was in my locker. All my things from the 12 years I had spent with the Redskins- photos, memorabilia- were sitting in a box in the equipment room.

That was the reality of football. We are nothing more than a spark plug in an engine and when that spark plug wears out, they find another one. I tried to get back into the game later on when I was 37, 38 years old, but it wasn't like today when older players can still negotiate another contract.

On the subject of players' health, there is a lot of talk today about concussions. What does football need to do in order to allay concerns among parents whose kids want to play the game competitively?

Do you know there are more concussions that occur in youth soccer than in football? Kids get kicked in the head and bang each other in the head. I think the football league is doing a lot by legislating helmet-to-helmet contact to protect players.

Just watch how quarterbacks are tackled today; they just lay them on the ground instead of slamming them like they used to when I played. I tell parents that youth football teaches many wonderful life lessons, like how to rely on a teammate, how to respect authority other than your own parents, how to win and also how to lose.

You're also exercising and watching your diet. There is a lot ingrained in the sport.

After playing 12 years in the NFL, you went on to a bright career in media as a sportscaster and analyst. What do you enjoy most about reporting on the game?

I wanted to be a teacher and my goal in broadcasting was simple: I wanted you as the viewer sitting at home, or in a bar, to know more about the game of football after you were done watching.

Plus, I loved working with my two partners for many years, Paul McGuire and Mike Patrick. We had a great experience together.

You also became a restaurateur by opening "Theismann's" in Alexandria, Virginia. What is your favorite dish on the menu?

I have a dish called Spirale & Chicken. It's homemade spirale pasta, sun dried tomatoes, chunks of chicken, and alfredo sauce. That's my favorite.