The Wreck & Brawl That Put NASCAR On The Map

Forty years ago, tires were screeching, fists were flying, and millions of Americans were buried deep in snow. Against all expectations,

The Wreck & Brawl That Put NASCAR On The Map 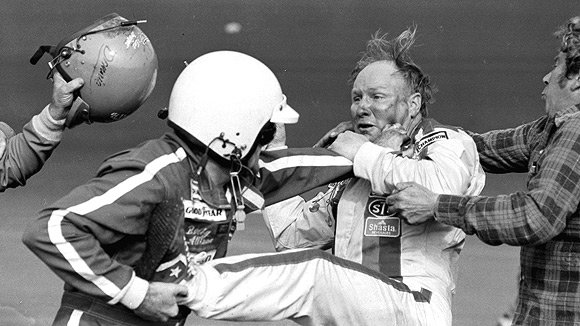 Allison and Yarborough brawling after crashing at the 1979 Daytona 500, the first race to be televised live from start to finish. The images helped launch NASCAR's national following.
Posted Thursday, February 14, 2019 8:00 am

Forty years ago, tires were screeching, fists were flying, and millions of Americans were buried deep in snow. Against all expectations, it was the perfect confluence of events for the 1979 Daytona 500, a race that would catapult NASCAR from a southeast regional sport to a national powerhouse.

Car races in pre-cable America were typically broadcast in sanitized highlights, or just in the final quarter. Even the Indianapolis 500 was edited and tape delayed. But the 1979 Daytona 500 was the country’s first auto chase that was televised live from start to finish.

It also happened to include multiple wrecks and a driver brawl. With a nail-biting finish to an overall thrilling afternoon, even the New York Times couldn’t resist running the dramatic racetrack story on the front page of its Sports section.

February 18, 1979 began with a morning downpour at the Daytona International Speedway. Miserable weather conditions cast doubt on whether the 21st annual Daytona 500, the second and most important race of the NASCAR Winston Cup Series, would even take place.

But the sky cleared and drivers moved to fire their engines. Some complained that track conditions were still wet, but Bill France, Sr., NASCAR’s founder and owner, insisted on a timely start. A lot was riding on the race. Months earlier, he inked a deal with CBS to broadcast the entire event from flag to flag, but the purse wasn’t going to be paid unless it ran on schedule.

Founded in 1948, NASCAR grew out of the blue color backwoods culture of the southeast. The heroes were local characters and personalities who made their reputations on dirt tracks before joining the circuit. By the late 1970s, the family-owned brand was poised for national growth but it needed a catalyst. CBS was willing to take that chance.

The network sent their football coverage crew to wire  the speedway for the best TV viewing spots. Not only would the entire 200-lap competition be aired live, but it would also include for the first time “in-car” mounted cameras and low angle pavement shots, all standard features today.

The high-speed roaring pursuit averaged 144 mph and saw 36 lead changes. Tensions rose as a series of spins, collisions, and engine failures sent cars against the wall or into a wet infield. By the 180th lap, it was Donnie Allison in car #1 and Cale Yarborough in #11, inches apart and doing battle for the lead. The remaining pack was at least 12 seconds behind.

Coming into the final lap, Allison was at front and Yarborough on his tail drafting. At the 2nd turn, Yarborough attempted a pass from the inside, but Allison blocked. Refusing to yield, Yarborough’s left tires rolled over the grass, forcing the 3,700 lb. machines to bang, lose control, and end up on the infield at the 3rd turn.

After 199 laps and nearly 3½ grueling hours behind the wheel, first and second place pilots were now out of contention. Trailing half a lap in third place was Rich Petty driving his #43 Oldsmobile. Taking advantage of the unforeseen fiasco, Petty fought to hold off his pursuers, Darrell Waltrip and A.J. Foyt, and clinch a fortuitous victory.

While the Petty camp was celebrating a landmark moment in NASCAR history, tempers boiled over on the grass at the site of the wreck. Donnie Allison and Cale Yarborough were embroiled in a fistfight and even Donnie’s brother, Bobby, jumped into the fray.  The scene was all captured on television, but it wasn't what NASCAR officials wanted to showcase to the world.

Adding to the viewership was a massive snow blizzard that crippled the Northeast and Midwest, holding millions of Americans captive at home in front of their TV sets.  Overnight, NASCAR had won over a new following outside its traditional market.  It was the first Monday morning ‘water cooler’ race talk.

Other articles enjoyed:  Stock Car Racing, Made in America, America's Legacy At Formula One, Engines Not Drivers, Testing Man & Machine, The Dakar Rally At 40