"I was born into wrestling" 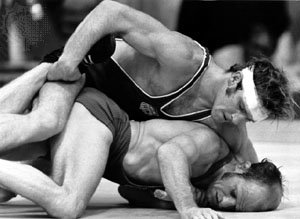 Dan Gable in action at the 1972 Olympics where he won gold in the lightweight freestyle wrestling competition. Twice an NCAA Division I champion, Gable went on to a successful coaching career at the University of Iowa. He remains the most accomplished freestyle wrestler in American history.
Posted Sunday, April 5, 2020 8:00 am

Not many athletes have a Hall of Fame museum named after them, but Dan Gable stands in a class of his own.  A gold medalist at the 1972 Olympics and a 2-time NCAA Division I national champion, Gable was and still remains America’s most accomplished freestyle wrestler.

Born into the sport, the gifted athlete who hailed from the American heartland overcame a family tragedy that deepened his drive for success on the mat. After posting strings of victories and breaking numerous records, he parlayed his wrestling talents to a coaching career that spanned over two decades at the University of Iowa.

During his tenure, Gable led the Hawkeyes to multiple NCAA championships and Big Ten titles. He was also head coach of the U.S. freestyle teams at the 1980, 1984 and 2000 Olympics.

Sports History Magazine asked Dan to share some of his memories and insights into the sport of wrestling.

My dad was a wrestler, not a real good one but a lot of his friends were good. My mom's brother was a state runner-up. All of these schools had great coaches and even the local YMCA offered the sport. Everybody from Waterloo tried, or was involved in the sport during the '50s-'70s.

When you were 15 years old, your older sister was assaulted and killed by a neighborhood teenager. Do you feel that you channeled all that family anger into wrestling?  For me, it wasn't family anger. I didn’t understand it at that time, but it must have been inside of me without my knowing it.

The reason was because eventually I felt the so-called guilt of not communicating what I knew ahead of time. I had been tipped off, but really didn't take it seriously from the guilty person. I wasn’t aware of that, but once it settled in it really made the difference. Mostly for keeping my family together.

In high school, you were state champion three times and graduated with a perfect 64-0 record. Were you an anomaly, or did the school have a tradition in wrestling success?  The school was already very successful before me because of a coach named Bob Siddens, who was phenomenal at the sport with kids and their parents.

At Iowa State University where you attended, you won 2 NCAA Championships and compiled a record of 117-1. The only loss was an upset against Washington University's Larry Owings in the final match of your final season. What happened there?  Pretty simple, I lost focus. Instead of concentrating on my performance, I was concentrating on the sport’s performance.

Many other factors like peaking incorrectly and too much confidence in both myself and the coaches in that it was an automatic thing for me. Especially when there was somebody out there that thought they could beat me and not knowing that.

It was a great coaching lesson and a great performance lesson that I learned for the future, on and off the mat.

Your grueling workouts were legendary. What was your regimen like?  That was my life every day, in season or out of season, from the time I'd get up until the time I'd go to bed. In fact, it was so ingrained that I probably trained while I slept. In fact, I know I did.

Fundamentally, what makes a great wrestler?  Attitude and genetics. Together, they make for high level performance.

You went on to compete internationally and won gold in the lightweight at the 1972 Summer Olympics in Munich. Tell us about that experience.  The loss in 1970 awakened me to study the sport instead of just being a hard worker. I added science to the sport. Because of that, my improvements came quickly.

During your tournament days, you faced off against the best from around the world. Are there any matches, or opponents who particularly stand out in your memory?  Of course. The champions from the previous years drove me.  I had a poster of the Russians on my wall called ‘Beat the Russians’. They dominated the sport at the time. Two Russians in particular that had lots of credentials only added to my drive and training.

As a coach at the University of Iowa from 1976-1997, you built up an impressive record of 15 NCAA team titles. In general, most star athletes aren't able to transfer their skills into becoming star coaches as well. How did you do it?  Pretty simple. I was born into wrestling, so the transition from being a wrestler to a coach was automatic. As a wrestler, I was always affecting those closely around me, so my coaching days began when my athletic days began. It was an easy transition and in fact, a none transition except for just learning more detail.

How is freestyle wrestling different today compared to the era when you competed in the 1960s and 70s, and when you coached in the 80s and 90s?  There are some rule changes, but really no difference in all of wrestling whether it be folkstyle or freestyle. It just takes a little time to adjust from one style to another.Basically, a few practices.

In wrestling, you need to be good in the standing position and the bottom position for both styles. The top position is icing but those that develop the top dominate.

Why can't traditional Greco-Roman wrestling, not the scripted arena entertainment kind, become a professional sport like boxing or ultimate fighting?  Because it’s difficult to perform the skills. Those skills aren’t entertainment and because of that, there’s not enough action. Those that do provide action would make it a better sport, but it's too difficult to get that kind of an edge.

Historically, how have American wrestlers fared at the Olympics and what can we expect next summer at the Tokyo Games?  Historically, we started a little behind because of the rule differences but we quickly caught up and are doing just fine, except in Greco.

The women are helping with the overall success and helped wrestling stay in the Olympic Games. We can expect a lot even though it's a year later. One more year of great preparation. We need that year to get better.