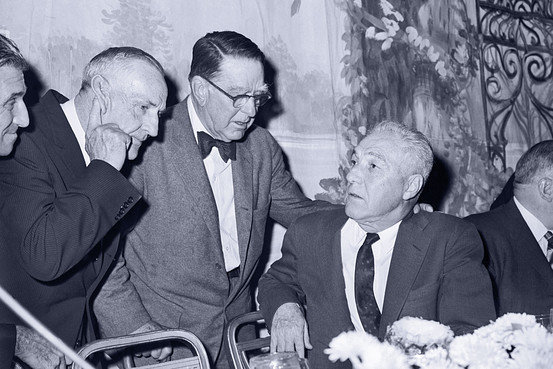 For years, the NFL couldn’t shake off the AFL from nipping at its heels and the NBA couldn’t break the popularity of the ABA. Eventually, the 4 organizations merged in their respective corners to create today’s professional football and basketball leagues.

But less known was the short-lived Continental League, which threatened to upend the NL’s and AL’s long-established duopoly in Major League Baseball. While the upstart league never played a single match, it forced MLB to undertake its first expansion since the modern game was born in 1903.

In 1958, New York City found itself stripped of two baseball teams that were a fixture of the Big Apple for generations. Beloved by their fans, the New York Giants had fielded All-Stars such as Willie Mays, Bobby Thomson, and Mel Ott, while the Brooklyn Dodgers counted luminaries Jackie Robinson, Roy Campanella, and Gil Hodges on their roster.

Along with the Yankees, Gotham’s 3 franchises fed the country’s largest baseball market with a steady diet of pennant championships and World Series victories. Over the course of 30 years between 1928 and 1957, those clubs appeared in the World Series 30 times, or on average every year.

But by the mid-1950s, the Giants’ and Dodgers’ aging stadiums, the Polo Grounds and Ebbets Field, respectively, were crumbling and attendance was dropping. Political wrangling with the city of New York over construction of new ball parks forced the owners to explore other markets.

Recent advances in air travel brought California to their sights. The Giants’ Horace Stoneham initially looked to Minnesota, which was home to the club’s top farm team, the Minnesota Millers. But Dodgers owner Walter O’Malley persuaded him that both franchises would benefit if they carried their famed rivalry together to California.

New York’s golden era of baseball came to an end after the 1957 season when the Giants relocated to San Francisco and the Dodgers to Los Angeles. Caught off guard, city officials needed a plan to replace the venerable NL teams that left behind a rich legacy, but with a trail of unforgiving, angry fans.

The movement of baseball teams, especially the weak ones, between cities was already taking place. America’s changing demographics were outpacing MLB’s outdated geography as the Boston Braves relocated to Milwaukee (1953), the St Louis Browns to Baltimore (1954), and the Philadelphia Athletics to Kansas City (1955).

Following the Giants’ and Dodgers’ departure, Gotham moved swiftly in creating a 4-man commission to restore baseball in the big city. Mayor Robert Wagner appointed prominent lawyer William Shea to head the group. Meanwhile, it wasn’t until December, 1958 that MLB executives formed their own expansion committees.

But bringing back NL baseball to New York was complicated. Despite the emergence of new markets, the politics were still old and owners were rooted in their traditional markets. Efforts to lure the Cincinnati Reds, Philadelphia Phillies, and Pittsburgh Pirates were met with no success.

AL and NL officials weren’t in a hurry to expand either. Comfortable in their arrangements, they preferred to preserve the same system that had existed since the early part of the century. In 1904, a year after MLB was launched, there were 16 teams playing 154 games a season. More than fifty years later, the same number of teams were fielding an equal number of games.

On July 27, 1959, at New York City’s Biltmore Hotel, Shea announced the formation of the Continental League, an 8-team circuit that would join as MLB’s 3rd league. Days later, 78-year-old Branch Rickey was appointed its president. In the 1940s, Rickey built the Dodgers into a NL powerhouse and hired MLB’s first black player, Jackie Robinson. The septuagenarian gave the Continental League instant national legitimacy.

5 cities immediately signed up for teams: New York, Toronto, Houston, Denver, and Minneapolis-St Paul. Atlanta, Dallas-Fort Worth, and Buffalo followed later. Each team deposited $50,000 into the league treasury and pledged $2.5 million for capital deployment. The league was scheduled to debut in the spring of 1961.

The teams were backed by renowned names and influential business figures. In New York, it was Joan Whitney Payson, a prior Giants minority owner who was disheartened when the team left for California. Her brother was publisher of the New York Herald-Tribune and ambassador to Great Britain.

In Toronto, it was media mogul Jack Kent Cooke. In Houston, it was a small group that included Craig Cullinan, grandson of the founder of Texaco. In Denver, it was Bob Howsam, owner of the minor league Denver Bears and son-in-law of Edwin Johnson, former governor of Colorado and U.S. Senator.

On the surface, the established NL and AL organizations held back from resisting the powerful challenge to their duopoly. Ford Frick, MLB’s Commissioner, even met with Rickey to discuss admission of the Continental League on an equal basis with the other two. But there was a reason behind Ford’s welcoming overtures.

Since 1922, baseball enjoyed special exemption from anti-trust legislation, but Congress was now revisiting that policy. House Judiciary Committee Chairman, Emanuel Celler, a Brooklyn Democrat who was enraged over his district’s loss of the Dodgers, introduced legislation that would place baseball under antitrust law.

Privately, however, team owners fretted at the prospect of a new league, knowing they might lose players from both their senior and minor clubs. Furthermore, everyone, including Rickey, saw the future of TV broadcasting as a lucrative source of revenue and MLB owners frowned at the idea of diluting the 16-team structure.

Resistance was stiffening and Rickey was prepared to bring players from the low minors and from Latin America to build his rosters, with or without membership inside MLB. But in reality, members of his own camp were more interested in big city baseball than in an independent league that would field second rate, unknown players.

It worked. The outsiders succeeded in cracking MLB’s entrenched interests and expand senior baseball. The crusade for a 3rd league formally ended on August 2, 1960 and by October, the NL announced new franchises for New York (1962, Mets) and Houston (1962, Astros). The AL followed the call with earlier dates for Los Angeles (1961, Angels) and Minnesota (1961, Twins).

The lesser markets of Atlanta (1966, Braves), Dallas-Fort Worth (Rangers, 1972), Toronto (Blue Jays, 1977), and Denver (Rockies, 1993) would have to wait. Buffalo was the only Continental League city that was never awarded a big-league franchise.

While most historians agree that America’s favorite pastime was heading for expansion anyway, the Continental League only served to hasten the process. In New York, fans waited 5 years to get their second team, but it would take them much longer to get over the loss of the Giants and Dodgers.