At Home with the Louisville Slugger 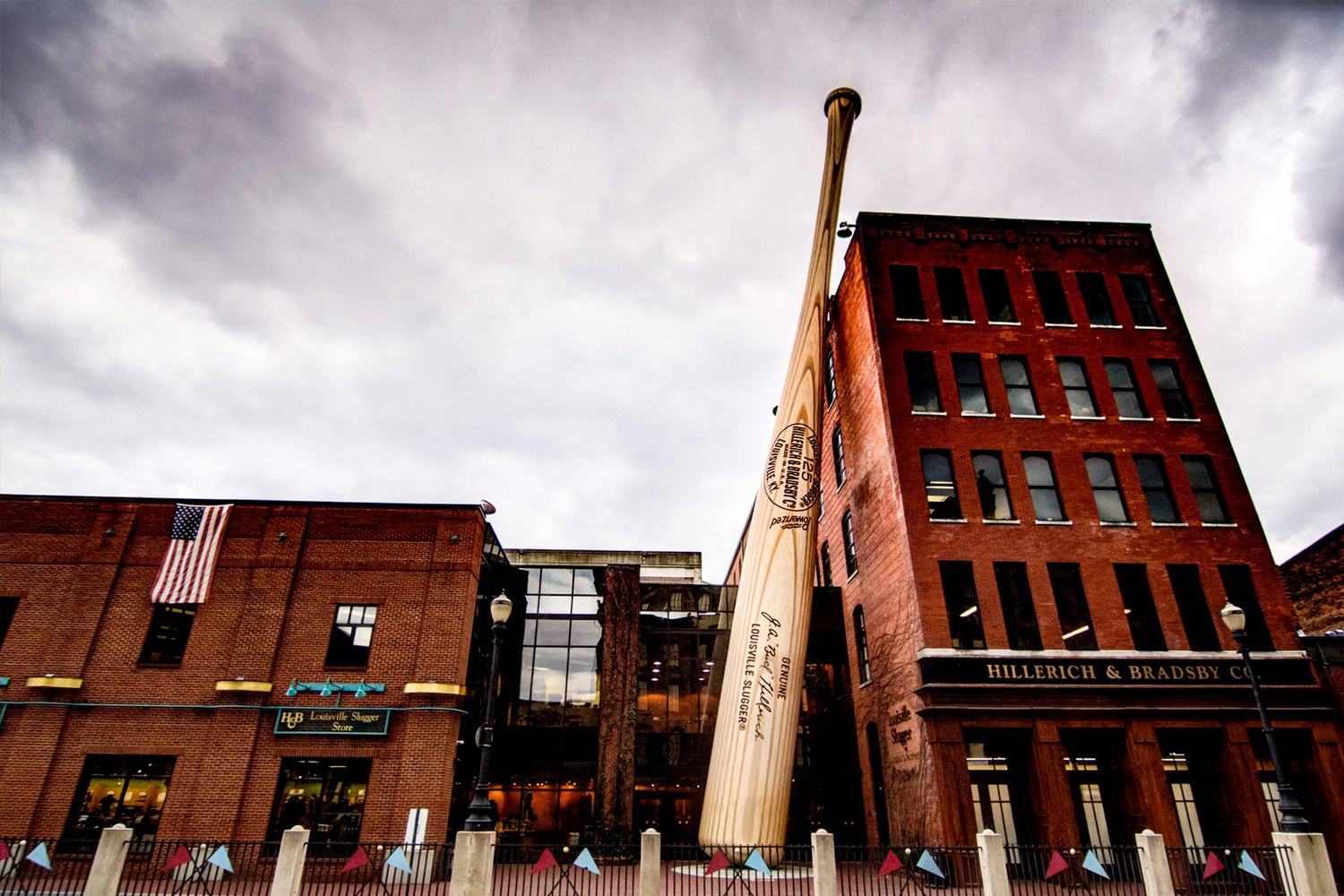 If baseball history is an extension of American history, then at its heart is the Louisville Slugger baseball bat, which dates back to the 1880s. Used by most Hall of Famers for generations, the renowned bat is still produced by the same family-owned business that launched it in the late 19th century.

Its rich legacy is even showcased at the Louisville Slugger Museum & Factory in Louisville, Kentucky. Each year, more than 300,000 visitors pass through the doors of the gallery, which Forbes magazine calls “One of the greatest sports museums in the world”.

Sports History Weekly asked Anne Jewell, Vice-President and Executive Director of the museum, to share with us the inspiring story of the Louisville Slugger.

The history of the Louisville Slugger baseball bat goes back to 1884. What kind of bats were players using at the time in early baseball?

Big and heavy ones! Practically tree trunks compared to today’s lighter, thinner preferences. We have a bat on display used by original “Louisville Slugger” – the great Pete Browning. That bat dates to 1887 and is a hefty 37 inches, 42 ounces.

What made the Louisville Slugger bat so popular that it took off "swinging"?

Ha! Nice! A number of decades passed between our first official bat in 1884 until our bat sales really became the dominant part of the Hillerich family business.

Beyond just the quality of our bats and the customer service, we attribute one of the biggest leaps in popularity to our decision to put player signatures on bats that could be purchased by the public. That happened in the 1910s and growth followed.

Hall of Famer Honus Wagner became the first American sports figure to endorse an athletic product by signing his name to the Louisville Slugger (1905). Do we know how that came about and the details of his contract?

We wish we knew more about that deal! I keep hoping we’ll come across a locked trunk around here and rediscover the original paperwork inside, if any ever existed. Since the Hillerich family and Wagner both had German roots, it’s not impossible to imagine a fairly casual “handshake” agreement over a stein of beer.

What other famous players have lent their names, or publicly endorsed, the Louisville Slugger?

You have a wonderful museum, aptly located in Louisville, Kentucky and called the "Louisville Slugger Museum & Factory". Tell us a little about what visitors can expect when they step in?

Thank you for the compliment! When visitors arrive they can expect to be greeted at our Main Street front doors by The Big Bat – it’s the largest in the world, soaring 120 feet into the sky. That sets the tone for the fun experience waiting inside our shrine to hitting.

Guests will make memorable connections across generations, be enthralled by artifacts that they can view and hold from baseball’s past, present and future, and be entertained by unforgettable stories and demonstrations. They’ll have a fascinating tour through the heart of our bat factory – the real deal – with innovative, modern machines working right next to some that are almost 100 years old.

What is the most popular exhibit or display at the museum?

Outside of the factory tour, our most popular experience in the museum gallery is “Hold a Piece of History.” We were the first to allow guests to hold bats that were actually used by the game’s greatest players.

When this interactive exhibit debuted 10 years ago we had six game-used bats in it. Guests were so delighted it’s now grown to at least one great player game-used bat for every team, so there’s something special for all fans!

You also have a factory tour where guests are shown how bats are crafted on the shop floor. Has the design of the bat, or the type of wood used, changed over the past century?

Years ago, the belief was the heavier the bat you could swing the further the ball would go. We now know the speed of the swing is critical to the success of hitting, so bats have gotten lighter and thinner over the years. Plus, when aluminum bats came into play, kids were growing up with bats that had big barrels and thin handles, and they wanted that kind of feel with their wooden bats.

The types of wood used over the years also changes. Hickory used to be big, not so much anymore. When I first started here 20 years ago the vast majority of bats were made from white ash, but maple has now overtaken it as the most popular wood, and birch is gaining popularity. We’ve also used beech and bamboo. We’re always experimenting with woods because different species deliver different qualities to a bat.

Do MLB players use their own personal bats in official games, or does the league require players to use only team-provided bats?

Most players use bats that are purchased by their teams. There have been a few that purchased their own bats directly from us but not many.

Babe Ruth used to swing a monster 50-oz Louisville Slugger early in his career. What did he use when he knocked his home runs at the peak of his career in the 1920s and early 1930s?

In 1920, Babe ordered 46-ounce and 47-ounce bats. In 1922 he ordered a 51-ounce bat! Most often, Ruth ordered 42-ounce bats. Like a lot of players, over time he ordered increasingly lighter bats, but the Bambino was still swinging 37 ounces in 1932, towards the end of his career.

His model was usually the R43 but he designed and ordered the R34 fairly often too. Fun fact: The 120-foot tall Big Bat in front of our museum is an exact-scale replica of Ruth’s 34-inch R43, and it’s a bit heavier at 68,000 pounds.

From a business point of view, the same family-owned company, Hillerich & Bradsby, has been making the Louisville Slugger since the beginning. How did they manage to maintain the brand name over 5 generations?

Most family-run businesses don’t last nearly this long, so it is quite an accomplishment, and a testament to the Hillerich family’s sense of stewardship with this iconic brand. Good, passionate people have worked here and supported the business over the years, producing quality product and forging solid relationships with players.

The family cared so much about the legacy of the Louisville Slugger brand that they determined the best way to ensure its continuity was to entrust it to a larger company to better compete with bigger businesses. Wilson purchased the brand in 2015, while Hillerich & Bradsby Co. maintained ownership of the factory and the museum.

What percentage of the baseball bat market does H&B control and were there any periods in the company's history when the business was faltering, or threatened by competition from domestic or overseas manufacturers?

Louisville Slugger is the official bat of Major League Baseball. As a private, family-owned business, we don’t release details like market share. H&B has withstood many challenges over the years from World Wars and severe economic woes to floods and fires.

The current situation with the pandemic is another very challenging historic moment that H&B plans to beat. As for other bat manufacturers, we’re always up for competition and there’s been plenty over the years. Many have come and gone, but H&B is still here.

What is the most interesting, or most inspiring, anecdote about the Louisville Slugger you can share with us?

I love the story of Bud Hillerich and his perseverance about making baseball bats part of the family business. When he was 17 years old and an apprentice in his father’s woodworking shop, Bud made the company’s first official bat for Pete Browning in 1884.

Bud was a big baseball fan but his father, J. Frederick, was not. J. Fred did not like the sport or the players and didn’t think there was any money to be made with baseball bats. He believed the future of the company was a revolutionary product (at the time) – a swinging butter churn. The swinging butter churn was an important product for a while, but we don’t make ‘em anymore.

We are, however, still churning out baseball bats! Bud stuck with his dream and plan of making baseball bats and the company adapted as needed to changing times and innovations – a philosophy we focus on to this day.